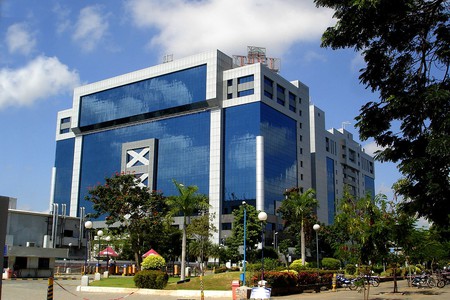 When it comes to architecture in Chennai, the conversation is more often than not dominated by the city’s glorious landmarks of colonial and ancient Tamil heritage. However, what many forget is that when it comes to raising marvelous man-made structures, modern Chennai has made some great strides too. Here are some of Chennai’s greatest post-independence architectural marvels that deserve your attention.

Chennai’s ITC Grand Chola is one of India’s best-known and most luxurious hotels. However, what makes it really unique is not its luxury, but rather, its architectural beauty. This modern marvel, completed in 2012, was designed by a Singapore-based firm to be a tribute to the great architectural achievements of Tamil Nadu’s Chola dynasty (famous for its temples such as the Brihadeeswara Temple). Featuring a fine mix of modern and Chola design sensibilities, the hotel complex spreads over 1.6 million sq ft. Reminiscent of great Chola temples, the hotel has four entrances and is reinforced by 462 pillars, most of which feature exquisite designs and hand-carvings inspired by the Big Temple in Tanjore. Among the more breathtaking aspects of the hotel is the fact that it features over a million sq ft of flooring made from marble that was shipped directly from Italy! 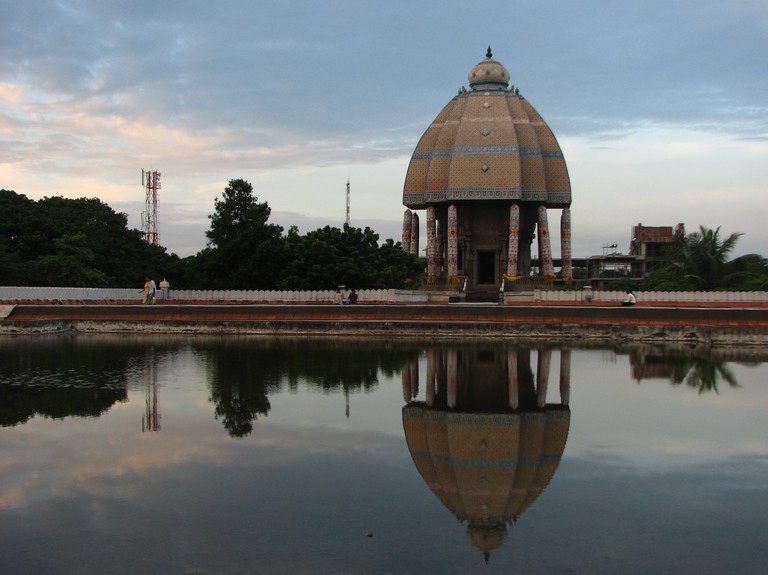 Valluvar Kottam Chariot facing the artificial pond located within the complex | ©Surajram/Wiki Commons
Constructed in 1976 as a memorial for the Tamil bard Thiruvalluvar, the Valluvar Kottam complex in Chennai is one of the state’s best-known landmarks. The main element of Valluvar Kottam is a 39m-high structure that is modeled after the famous traditional chariot in Thiruvarur’s Thyagarajaswamy Temple. The exquisitely designed complex is best-known for its bas-relief inscriptions of all 1,330 verses of Thirukkural, which is Thiruvalluvar’s greatest and most-famous work. To add to its beauty, the chariot structure overlooks an artificial pond and also has a life-size sculpture of the poet himself. Apart from the main structure, Valluvar Kottam also features a fully-fledged auditorium that can seat nearly 4,000 people.
Open In Google Maps
Tirumurthy Nagar, Nungambakkam Chennai, Tamil Nadu, 600034, India
Give us feedback 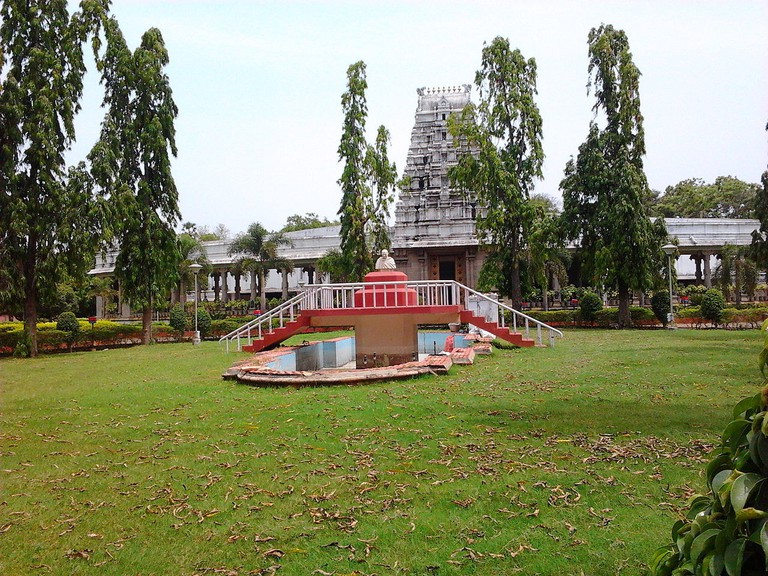 The Mahatma Gandhi Memorial located within the Gandhi Mandapam complex | ©Aravind Sivaraj/Wiki Commons
Sandwiched between the sprawling Guindy National Park and IIT Madras campus, the Gandhi Mandapam complex is one of Chennai’s best-known venues for cultural functions. However, the complex has more to it than just utility and is in fact home to five splendid memorials constructed for different eminent personalities of India, including Mahatma Gandhi. Each of the five memorials is constructed to adhere to different styles and sensibilities, with the biggest being the Gandhi Memorial, which is built in the style of a South Indian temple. The Gandhi Memorial was also the first one to be built and was famous for having been the resting place for Gandhiji’s ashes before they were scattered into the sea. Apart from the five memorials, the complex is also famous for being one of Chennai’s largest open green spaces and regularly attracts visitors.
Open In Google Maps
Sardar Patel Road, Guindy National Park, Guindy Chennai, Tamil Nadu, 600022, India
Give us feedback

Originally conceived as a replacement for the age-old Fort St. George as Tamil Nadu’s Secretariat Complex, this building is one of the biggest construction projects undertaken by any state government in independent India. After several delays and false starts, the site was finally chosen in 2007 and plans were drawn by the Berlin-based GMP architectural firm. Constructed at a cost of more than Rs.1,100 crores (not including later revisions), the Secretariat was finally inaugurated in 2010 by the erstwhile government. However, after the 2011 Tamil Nadu election, the new government decided to convert the building into a state of the art hospital at an additional cost of over Rs.110 crores. The hospital was inaugurated in 2014 with a capacity of over 400 beds and several specialties. Despite its controversial and strained journey, the complex is still one of Tamil Nadu’s greatest architectural wonders. It spreads over nearly a million sq ft of floor area and also features a unique dome built at a cost of Rs.25 crores! 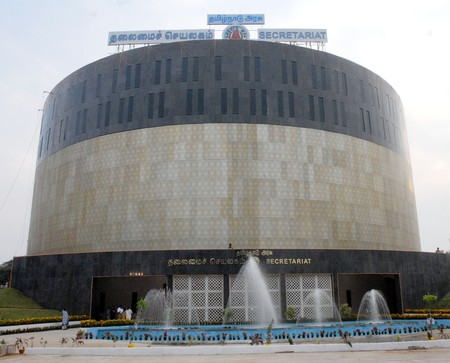 A panoramic view of the Tidel Park complex in Rajiv Gandhi Salai, Chennai | ©PlaneMad/Wiki Commons
At the time of its construction, TIDEL Park was India’s largest ever IT Park and even one of Asia’s largest. Built at a cost of Rs.338 crores, this massive structure continues to be one of Tamil Nadu’s most state-of-the-art buildings in terms of technology and is home is dozens of IT and ITES firms. While its design is reminiscent of other similar modern-era IT parks, what really sets this complex apart is its sheer scale. Apart from its massive spread of nearly 1.3 million sq ft, the complex also features a 650-seat auditorium, a fully-fledged 16,000 sq ft canteen area and enough parking space for 4,000 two-wheelers and 1,200 cars!
Open In Google Maps
TIDEL Park Rajiv Gandhi IT Expressway, Tharamani Chennai, Tamil Nadu, 600113, India
Visit Website
Give us feedback

Building
Facebook
Email
Twitter
Pinterest
Copy link
Share
Map View
Mumbai may long have claimed the mantle as India’s vertical city, but it is the famous LIC Building in Chennai that was India’s first skyscraper and also the country’s tallest building at the time of its completion in 1959. Standing at a height of 44m in Chennai’s arterial Mount Road, the LIC Building is also famous for being the first building to use pile-foundation in the region. With a floor space spread over 50,000 sq ft, the building boasts capacity to house more than 1,500 employees. While numerous other buildings have overtaken the LIC Building in terms of height, it still remains one of Chennai’s most-popular landmarks and one of the city’s key cultural identifiers.
Open In Google Maps
LIC Building, 97 Anna Salai, Anna Salai, Triplicane Chennai, Tamil Nadu, 600002, India
Give us feedback 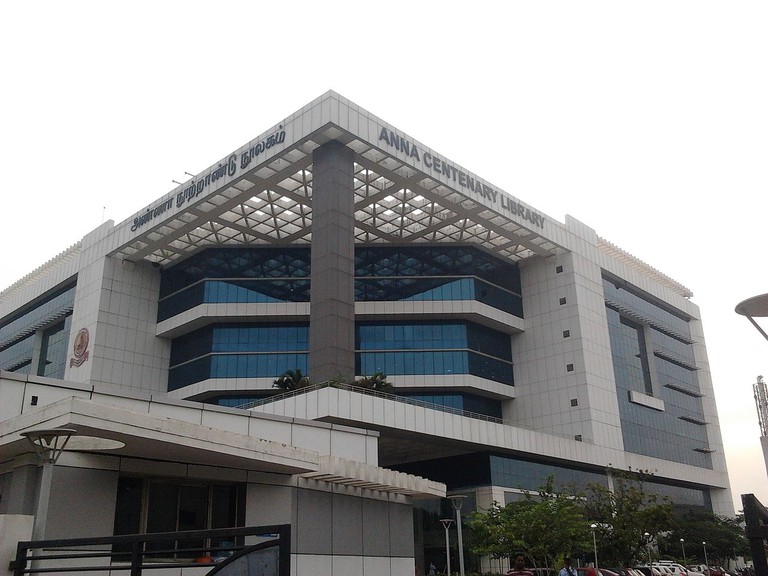 Chennai's Anna Centenary Library currently houses more than 1.2 million books | ©Commons_Sibi/Wiki Commons
The Anna Centenary Library in Chennai is not only one of the largest and most technologically advanced libraries in India. Constructed at a cost of Rs.172 crores to mark the centenary of CN Annadurai, a former Chief Minister of Tamil Nadu, the library complex houses more than 1.2 million books. It also boasts some of the best accessibility technologies for the visually impaired including a fully-fledged Braille section with 1,500 books and 1,080 audiobooks. Apart from its collection of books, the library has also become a popular cultural venue in Chennai thanks to a massive auditorium with seating capacity for nearly 1,300 people and an amphitheater on the terrace that can seat 800 people.
Open In Google Maps
Gandhi Mandapam Road, Surya Nagar, Kotturpuram Chennai, Tamil Nadu, 600085, India
+914422201011
Visit Website
Give us feedback
Give us feedback