Mouthwatering Desserts You Need To Try in Agra, India 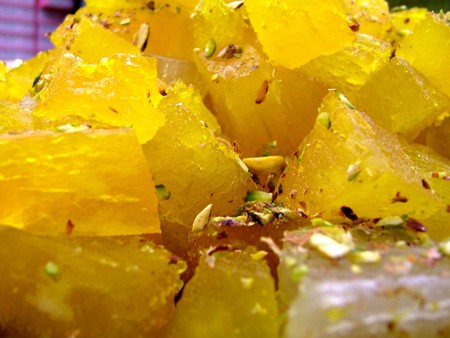 Agra’s delicacies, which include a variety of pure desi ghee (clarified butter) sweets, are also a part of the city’s Mughal heritage. These melt-in-your-mouth confectionaries will always leave you wanting more. Friends and relatives never fail to mention these specialties and gasp at the idea of not bringing any home. To satisfy your sweet tooth, we have put together a guide to four of Agra’s best-known sweets.

Known to have originated from the kitchens of Mughal emperors, petha is one of the two prime attractions (the first being Taj Mahal) that brings thousands of people to Agra.

Petha is soft and chewy with a candy-like texture. It is made of ash gourd or white pumpkin and is often devoured in dried form or dipped in sugar syrup. Long ago, petha was also used as a form of medicine and was considered beneficial for blood pressure and hydration.

Agra has around 50 different flavors to offer, with angoori (grape), kesar (saffron), pineapple, mango, paan (betel leaf), and strawberry being some of the well-liked ones. However, dry petha, also known as Agra petha, is the original and basic form that is most liked by people.

Of course, you’ll find petha in every nook and cranny of Agra’s streets but the best pethas are found at Panchhi Petha. You enter the shop and you will find rows of colorfully arranged pethas, with someone waiting to greet you and carefully explain the specialty of this basic sugar, water, and fruit delicacy. Gopal Das Pethewale, as the name suggests, is also another option that is widely suggested by the locals of Agra.

A dry delicacy that is made using sesame seeds, jaggery, oil, and sugar, this sweet is perfect for the cold Agra winters in December and January, as it is considered to have warming properties. It comes in various varieties, such as round bite-sized pieces called rewadis or small square-shaped chikis, without the sesame seeds, which are made especially for children.

Bedariya Ram Gajak Wale is one of the most well-known pioneers of Gajak in Agra, offering different kinds of gajak such as special mewa gajak and khasta chikki gajak. Manohar Lal Daulat Ram Garg is also one of the famous places to go and try this specialty.

A round-shaped flour mold that is mildly fried, dipped in sugar syrup, and coated with dry fruits, ghewar is especially enjoyed during the Teej festival, which is a fasting festival for Hindu women. It also marks the advent of monsoons in July and August, and that is when the sweet is readily available in all shops around the city, as it requires a certain degree of moisture to be prepared.

Although ghewar initially originated in Rajasthan, it has become quite popular in Agra, especially in Seth Gali, where one can find a line of sweetmeat makers and see ghewar being made live.

Agra’s Bikanervala is best known for having a variety of different kinds of ghewar, and have frequently won the Times Food Award.

Although they are not specific to Agra, laddoos are very common and popular among the locals. Laddoos are mainly made with gram flour, semolina, and coconut and come in various types, including boondi laddoo and besan laddoo. Shahi laddoos are considered to be the fanciest of the lot, filled with saffron and dry fruits. They are the main choice of sweets that are served at celebratory and religious festivals, especially during Diwali. Most people will send their family and friends decorated boxes filled with these yellow-colored delicacies.

Even though Petha and Gajak are the two main sweets to have originated from Agra, you will never fail to find some of India’s best sweetmeats around the city. Some of the best-known places are Bikanerwala (address above), Bhagat Halwai, Gopaldas, Deviram, and Brijwasi.