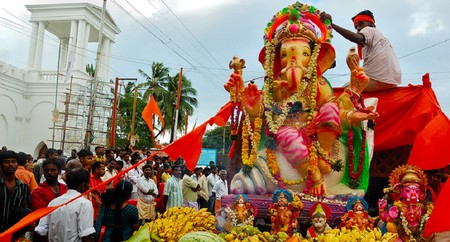 On the last day of Ganesh Chaturthi, the idol is taken on a procession through the streets, riding with joyous worshippers | © res.cloudinary / WikiCommons

From artists spending days creating beautiful idols of Lord Ganesha to the procession through India’s busy streets, the Ganesh Chaturthi festival is a visual spectacle held across the states of India.

Held in August or September every year, Ganesh Chaturthi, celebrating the birth of Lord Ganesha, is one of the most anticipated festivals in the Hindu calendar. Colourful statues of the deity, beautifully decorated pandals (temporary tents), vibrant celebrations and a final Holy immersion ceremony can be witnessed during this 10-day event.

Two to three months before Ganesh Chaturthi, skilled artisans begin creating the idols, or murtis, of Ganesha, making sure that the finest details are attended to. They only use environmentally-friendly materials, such as clay, paper-mâché and natural fibres. The idols are then painted and embellished as needed. 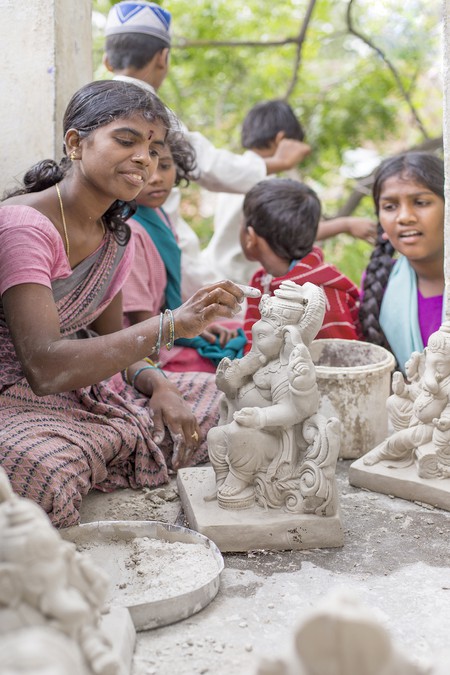 Statues being made in Anantapur | © vdhya / Shutterstock 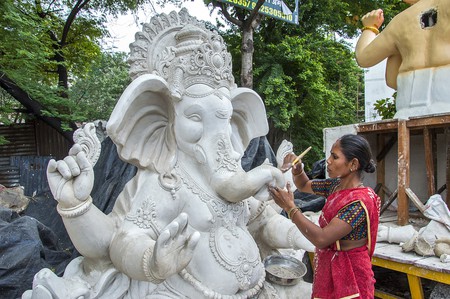 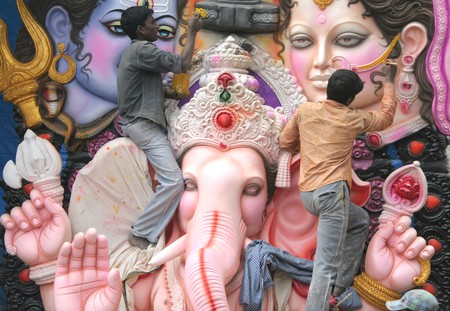 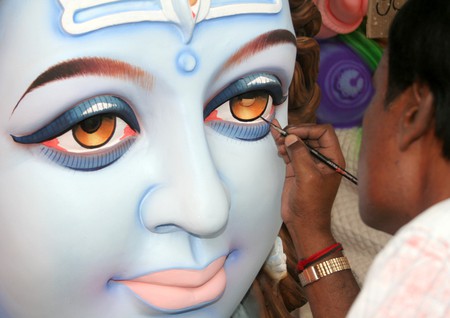 As the festival approaches, numerous roadside stalls can be found selling colourful Ganesh idols of varying sizes and designs. The size of the idol ranges from a few inches to over 70 feet tall. The smaller ones are kept in homes or shops, while the larger ones are bought for community celebrations. 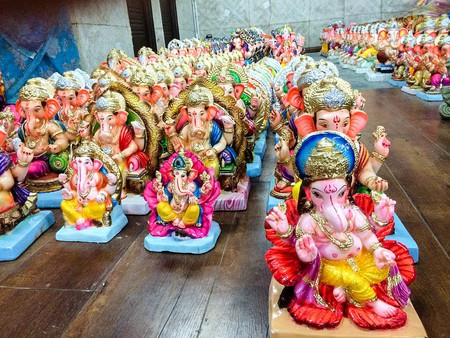 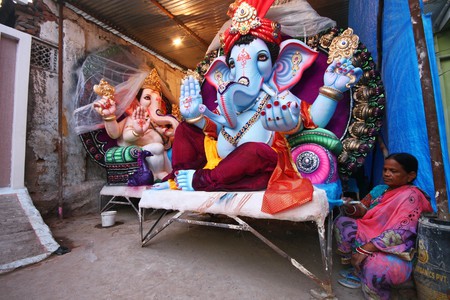 Before the Ganesh idol is brought home or installed in pandals, the place is cleaned and washed thoroughly. On the first day, at an auspicious hour, the idol is brought over and installed on an elaborately decorated pedestal. The priest performs a ritual, called Prana Pratishtha, to invoke the holy presence into the idol. Following that, an elaborate puja (prayer) known as Shodashopachara (16-step worship) is performed, which the public can attend and participate in.

During the puja, aarti (prayerful ceremony of light) and offerings are made to the idol in the form of coconut, jaggery, red hibiscus flowers, floral garlands, durva grass (Bermuda grass) and homemade sweets, such as 21 modaks (steamed dumplings filled with jaggery and grated coconut). At the end of the puja, sweets are distributed to the guests as prasad (religious offering). For the next 10 days, the same ritual of puja continues, typically in the morning and evening. For those celebrating the festival at home, the idol is kept for either one and a half, three, five, seven or 10 days. 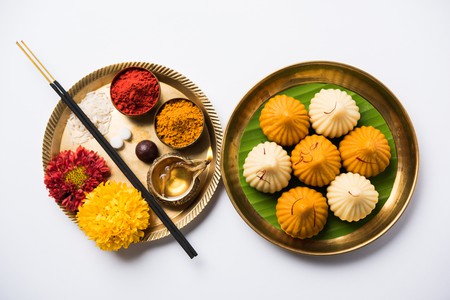 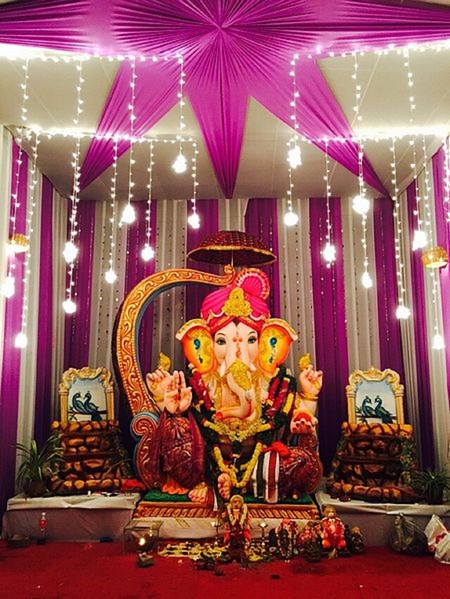 Over the course of the event, people can witness cultural performances and dancing while songs dedicated to Lord Ganesha are played throughout the night. On the last day of the festival, the idols are taken down from the podium and carried on a procession through the streets accompanied by his elated devotees. 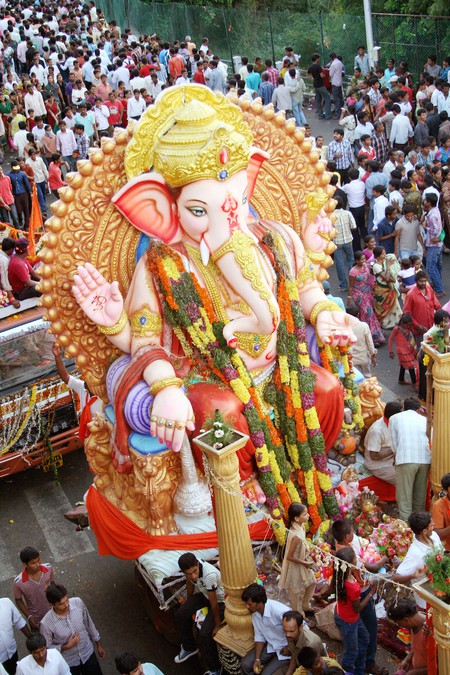 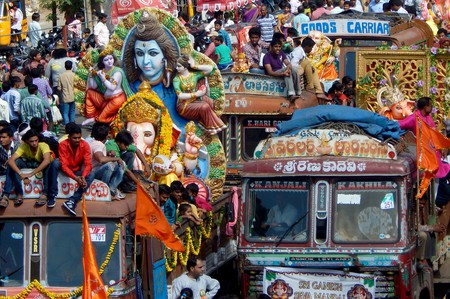 Singing, dancing, drumming, splashing of colours and chants of Ganpati Bappa Moraya Pudhchya Varshi Lavkar Ya (‘come back soon next year’) accompany the procession, which culminates at the sea or at other bodies of water – where, along with prayers, the idol is immersed into the water.

This ritual is called Ganesh Visarjan and it marks the deity’s send-off from its home with a promise of welcoming the God again the following year. The ritual has various meanings to devotees, for example, some believe it to be a purification of their conscience, while for others, it’s a dissolution of their obstacles or problems. 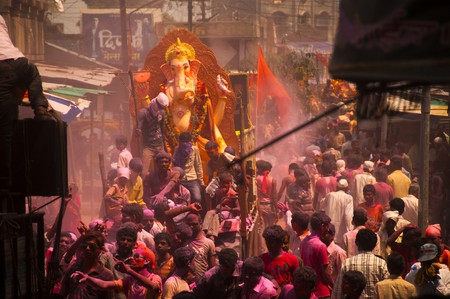 The statue of Ganesh being carried through Mumbai | © CRSHELARE / Shutterstock 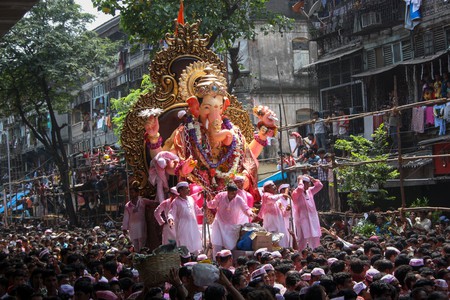 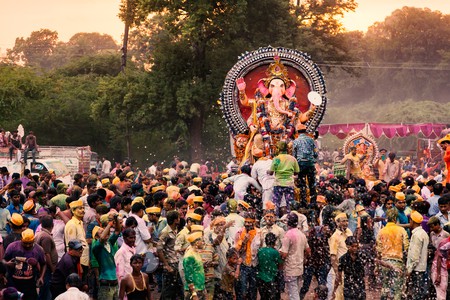 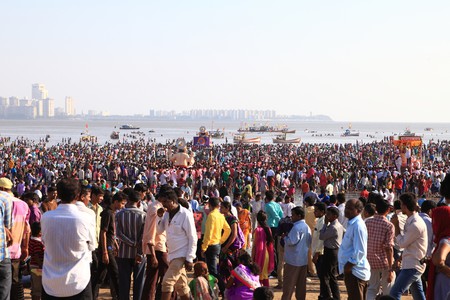 In Mumbai, the statues are carried directly into the sea. But in non-coastal cities, they might be thrown into the water with a crane. Whatever the method, the statue will ultimately dissolve leaving only the debris of the celebrations behind. 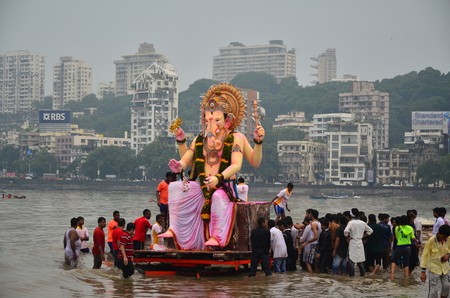 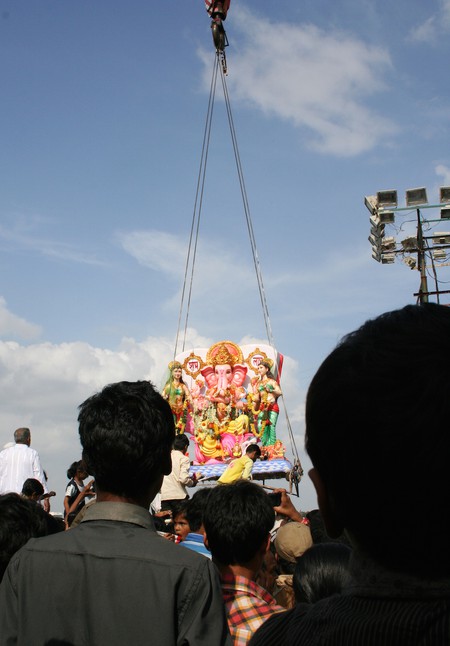 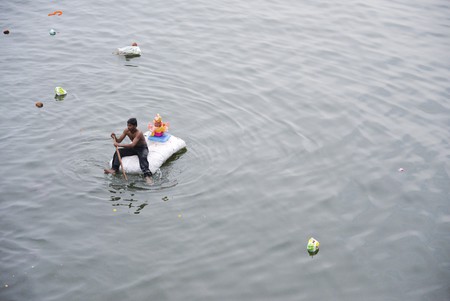