24 Instagram Photos to Make You Fall in Love With Rajasthan 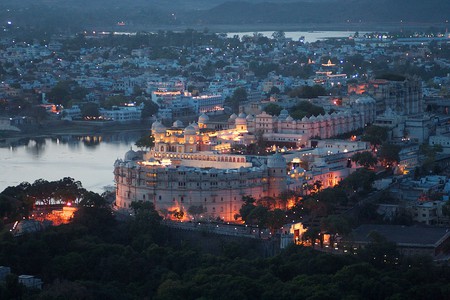 Rajasthan, also known as the ‘Land of Maharajas’, is seemingly one of the most Instagrammable places in India. Rows of majestic forts and palaces, centuries-old architecture, colourful façades, scenic lakes, rugged landscapes, lively festivals and culture, lip-smacking traditional cuisine, golden sunsets and sand dunes – this largest state of India is brimming with a vibrancy that will leave you clicking that shutter non-stop. Here are 24 Instagram photos that will make you fall in love with Rajasthan and inspire your wanderlust.

The epitome of royal splendour, the Devi Kund Sagar in Bikaner boasts cenotaphs that are a blend of Islamic and Rajputana architectural styles. While it is gorgeous round the clock, it becomes all the more appealing after the sun goes down!

Also known as City Palace, Kotah Garh is a beautiful blend of Rajasthani and Mughal architecture and art – a sight to remember!

Standing at an altitude of 400 feet (122 metres), the Mehrangarh Fort is an architectural masterpiece, boasting royal touches, intricate detailing and a sprawling courtyard.

・・・ @rajasthani_rang __💙💚💛💜💦 pX: @_ayush_sanadhya The glimps of The Grand Mehrangarh Fort 😍 . Mehrangarh fort,Jodhpur,Rajasthan Mehrangarh Fort (Hindi: मेहरानगढ़ का दुर्ग), located in [Jodhpur], Rajasthan, is one of the largest forts in India. Built around 1460 by Rao Jodha, the fort is situated 410 feet (125 m) above the city and is enclosed by imposing thick walls. Inside its boundaries there are several palaces known for their intricate carvings and expansive courtyards. A winding road leads to and from the city below. The imprints of the impact of cannonballs fired by attacking armies of Jaipur can still be seen on the second gate. To the left of the fort is the chhatri of Kirat Singh Soda, a soldier who fell on the spot defending the Mehrangarh fort. . #rajasthani_rang #photography #photo #photos #pic #pics #picture #pictures #snapshot #art #beautiful #instagood #picoftheday #photooftheday #color #insta #exposure #composition #jodhpur #instagraff #ayush_sanadhya_photography #rajasthan #mehrangarhfort #instalikes

Another postcard-perfect view of Mehrangarh Fort!

#mehrangarhfort, located in [#jodhpur , #rajasthan , is one of the largest forts in India. Built around 1460 by Rao Jodha, the fort is situated 410 feet above the city and is enclosed by imposing thick walls.

Lake Pichola in Udaipur is an artificial freshwater lake with bathing ghats, temples, hills and palaces surrounding it – a spot to visit at dusk and after!

Overlooking Lake Pichola, the City Palace is nothing less than captivating. It’s the conglomeration of several palaces, and a blend of Medieval, European and Chinese architecture with cenotaphs, arches, turrets and domes.

Title: The Royal City Palace 👑 Date: 2 July 2016 Location: Udaipur, Rajasthan Caption: Swadesh Darshan Yojana was launched on 9 March 2015. The objective of this was to develop world class tourism infrastructure. As a part of the Swadesh Darshan Scheme, theme based tourism circuits (TBCT) around specific themes such as religion, culture, ethnicity, niche, etc are identified for infrastructure development across the country. City Palace built over 400 years ago under Mewar Dynasty. The Fatehprakash Palace, which is now a luxury hotel is among tourist favourite. #NewIndiaThruMyLens #BadalteBharatKiTasveer #projektlsr

The Jal Mahal, which translates to ‘Water Palace’, sits in the middle of Man Sagar Lake and is a lovely synthesis of Rajput and Mughal architecture. The beautiful backdrop provided by the Nahargarh hills adds to the charm.

Architecture aficionados will instantly fall in love with the Taragarh Fort in Bundi, owing to its stepwell reservoirs, ornate palaces and forts, and tunnels that pass through the Nagpahari Hill on which it stands.

Also known as the ‘Hall of Private Audience’, the majestic Diwan-E-Khas of City Palace, Jaipur is enveloped in gold and red hues and features exquisite Persian, Rajasthani and Mughal paintings, along with ancient texts.

Set on the Aravali Range, the Amer Fort in Jaipur is a UNESCO World Heritage Site, boasting a fusion of marvellous Indo-Islamic architecture – it’s a feast for the eyes!

Ganesh Pol is the entryway to the royal quarters of Amer Fort. The intricate sandstone and marble work steals the show!

Rajasthan is gradually becoming one of my most favourite places in the world. Here is the beautiful Ganesh Pol (named after the rather popular Hindu elephant god Ganesha) that served as an entry to the royal quarters of the Amer Fort, back in the 17th century. Just look at those colours and all that intricate work done on marble and sandstone. Moreover, all the paint used is vegetable colours! Really impressed, #wandering in Rajasthan. #itswanderful #thewanderfulmusician . . . . . . . #jaipur #rajasthan #india #travelblogger #igers #wanderlust #instagram #instagood #photooftheday #travel #travelgram #travelphotography #natgeo #natgeotravel #bbctravel #lonelyplanet #cntraveler #canon #picoftheday

Also known as the ‘Palace of Winds’, the Hawa Mahal in Jaipur is an architectural marvel with pink-painted honeycombed-styled windows that will leave you spellbound.

At about 590 feet (179.8 metres) high, the beautifully ornate Chittorgarh Fort is wrapped in tales of bravery and sacrifice. The striking features are its Rajput architecture and the 22 water bodies within the fort.

The grand Junagarh Fort in Bikaner is a blend of Rajput, Mughal and Gujarati architectural styles, complete with frescos and lacquer and mirror work.

With gold and red filigree design, lattice windows, wooden ceilings inlaid with mirrors and walls adorned with gold leaf paintings, the Anup Mahal in Junagarh Fort is a remarkable testament to historical and architectural beauty.

Commissioned by the Bikaner’s richest merchants, the majestic Rampuria Haveli is the mystical blend of beauty, splendour, joy and antiquity – no wonder it’s called the ‘Pride of Bikaner’.

Below is a picture of the yellowish-golden streets of Jaisalmer, also known as the ‘Golden City of India’, owing to its yellow sandstone architecture and yellow sand.

Jaisalmer Fort is one of the largest fortifications in the world. It is situated in the city of Jaisalmer, in the Indian state of Rajasthan. It is a World Heritage Site. It was built in 1156 AD by the Rajput ruler Rawal Jaisal, from whom it derives its name. It’s honeycombed with narrow, winding lanes, lined with houses and temples – along with a large number of handicraft shops, guesthouses and restaurants. About 3000 people residing within its walls. #gramoftheday #aftabphotography #storiesofindia #indiaclicks #india_gram #captured_india #indianclicks #fotography_india #indian_photos #india_ig #desi_diaries #_oye #incredibleindia #india_daily #india_igers #rajasthan #_sor #travel #travelgram #wanderlust

Here is the Instagram-worthy Umaid Bhawan Palace – a glaring structure. Walking into it will make you feel like a royal!

Sunset at Pushkar lake – its calm and peaceful setting will allow you to lose yourself for the rest of the night!

Pushkar is a town bordering the Thar Desert, in the northeastern Indian state of Rajasthan. It's set on Pushkar Lake, a sacred Hindu site with 52 ghats (stone staircases) where pilgrims bathe. The town has hundreds of temples, including 14th-century Jagatpita Brahma Mandir, dedicated to the god of creation, which has a distinctive red spire and walls inlaid with pilgrims’ silver coins. . . . . . . . #indicouple #pushkar #pushkarfair #pushkarlake #pushkarmela #pushkarcamelfair #pushkarkahotel #india #indiatour #indiatourism @abhifoodie

The atmospheric and lively festival of Teej not only marks the start of monsoon but is also observed by Hindu women for marital bliss. There are colourful parades on the streets, Rajasthani cultural performances and a lot of traditional feasts.

Catch a glimpse of Rajasthani culture through the ‘Puppet Show’.

I am fortunate enough to have seen a fair number of musicals around the world and to have witnessed (or been a part of) grand productions in cities like London, Singapore, Moscow, Kiev, Kuala Lumpur and, of course, cities across India. But this miniature one, in the form of a puppet show (locally called 'Kathputli naach'), in the City Palace of Jaipur, was one of the most enticing ones till date. The humble setup, the colourful characters and the easy to understand plot would, any day, match a Shakespearean tragedy with a hyped Bollywood twist! I'm slowly falling in love with Rajasthan, the colourful, desert state of India. #itswanderful #thewanderfulmusician . . . . . . . #jaipur #rajasthan #india #rajasthandiaries #igers #wander #wanderlust #music #musical #theatre #travel #travelgram #travelphotography #picoftheday #natgeotravel #lonelyplanet #travelblogger #instagram #instagood #incredibleindia

The must-have experience in Rajasthan is a camel ride.

The spectacular golden Sam Sand Dunes in Jaisalmer – a sight to behold!

And don’t miss a romantic boat ride in the City of Lakes, Udaipur.