Kathakali dancers perform at a street carnival during Kochi new year celebration |© Dmytro Gilitukha
It is believed that Cochin had started trading in spices, ivory, and many other goods in 992 BC. The beautiful port city in Kerala, India is known as “Queen of the Arabian Sea” because of its importance in business. Majorly known for spices, the town has seen waves of colonial settlements over centuries. The Portuguese, Dutch and the British considered Cochin an important port. Today, the city thrives within lush green cultivation growing abundantly. It is a culturally diverse town with many ethnicities living together. Here are 18 photographs to prove why Kochi is a must visit destination in India!

If you are in Kochi (Cochin) you cannot miss the strong aroma of spices sold in every second shop. Kochi has been an important port for spice trade for centuries and there are spice trading families who continue to uphold their family tradition with the same business.

Since 2012 Kochi has been hosting the Kochi-Muziris Biennale, a first of its kind contemporary art exhibit in India. It is supported by the Government of Kerala. During the festival, the city is an art hub and it is fascinating to see artists and artisans from all over the world gather in the port town.

Since Kochi has been an important port city since the earliest of times, many ethnic groups came and established settlements here, the traces of which are still found today. The city is filled with 16th century (and older!) buildings that have been renovated and converted into hotels by their owners. Whether you stay in one or simply visit, these structures are a passage to history.

Mattancherry Palace, or the Dutch Palace, was a gift from the Portuguese to King Unni Goda Varma Tirumulpadu for giving them large pieces of land to build factories and a trade colony in India. The palace was, subsequently, taken over by the Dutch and then by Hyder Ali before it went to the British. The wood carved ceiling and mural art all over the interior is a marvelous sight. The architecture is a predominantly traditional Kerala style called Nalukettu.

While lift nets, widely known as Chinese fishing nets, are a common sight in China, they’re quite unique to Kochi. Their construction and size look graceful on the coast, especially during dawn or dusk, and make for great photographs.

The Chinese fishing nets are huge and beautiful © Aditi Mukherjee

If you visit Kochi, take some time out and enjoy the view from the city’s coastline. Kochi has been an important port city since ancient times. The Romans, Arabs, Portuguese, Dutch, Egyptians, and Persians have all landed on Kochi’s shore in search of trade.

The Kochi coastline was, once, bustling with traders and businessman © Aditi Mukherjee

Kayees is an old, tiny restaurant that serves delicious local food. The place is usually swarming with people and it is utter chaos but if you manage to get a seat, you won’t be disappointed with the food (unless you are not a fan of spicy food). They first offer hot cumin flavored water, a typical drink in Kerala, and then serve your order. Food in Kochi is a mix of traditional Kerala items, Portuguese, and Dutch dishes. 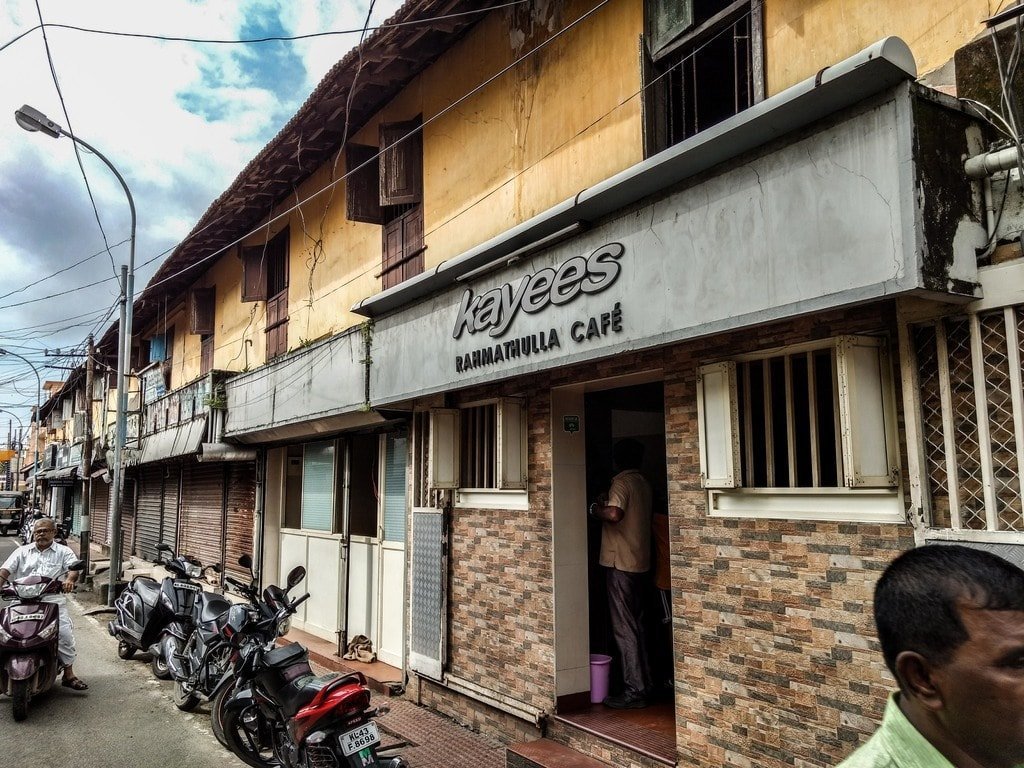 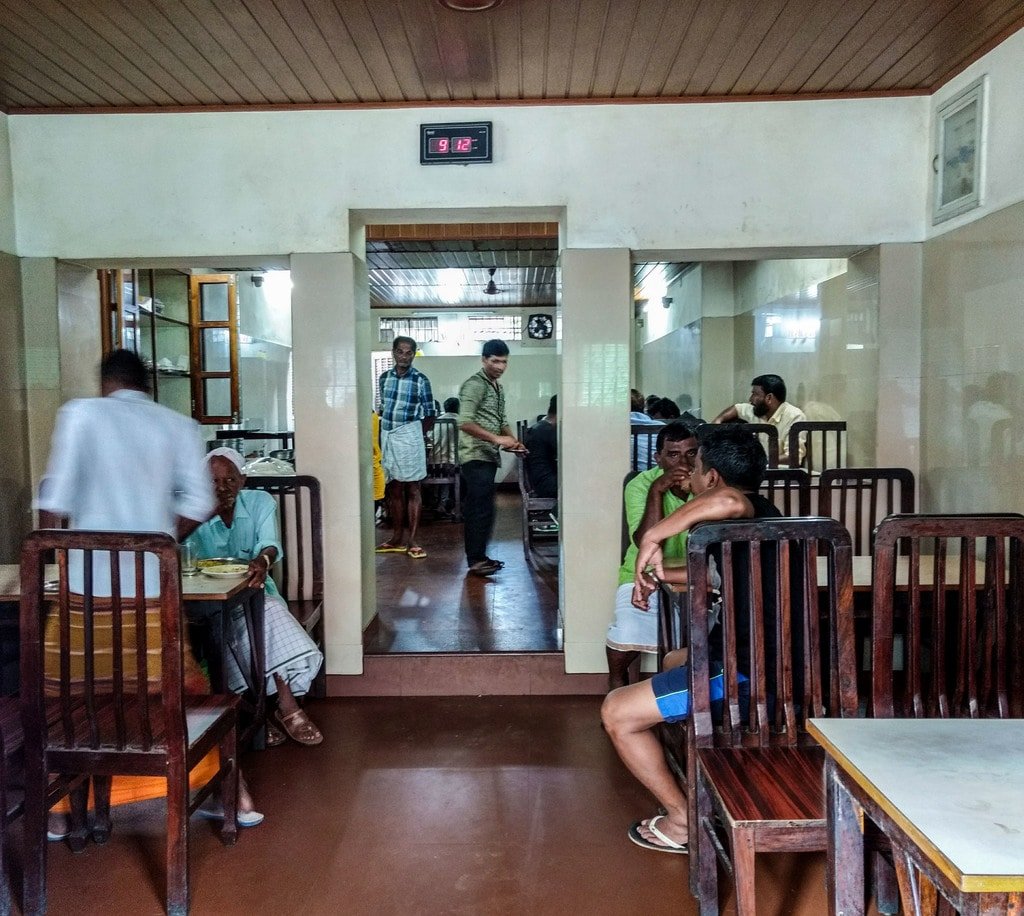 There is an abundance of plants in Kochi. It almost seems as if the plants are the true residents of the town and people have found space to make homes here and there. Since the climate is tropical there are lots of flowers and large expanses of mangroves. There are dolphins in the backwaters of Kochi too!

The government in Kerala supports and nurtures art and artists. There are plenty of artists who’ve made Kochi their home and some have built very successful careers for themselves as painters and artists in the city. It’s a treat to see their work in their studio.

The Portuguese came to Kochi with the legendary explorer Pedro Alvares Cabral and settled for more than 100 years. In this time their culture entwined with that of Kochi’s that still existed. The Indo-Portuguese Museum showcases altars, processional crosses, and many other objects from that time.

Formerly Bishop's House, the building is a museum to showcase Portuguese history in Kochi © Aditi Mukherjee

Since Kochi was home to the Portuguese, Dutch, and then the British, there are a number of churches in the city that date back to the 16th century. These have been renovated and are active churches of the community made in beautiful Dutch architecture.

The Portuguese, Dutch and British built many churches in Kochi © Aditi Mukherjee

Since the Kochi-Muziris Biennale started in 2012, there has been mural art all over the city. Some really interesting ones are huge portraits of locals working in the factories. It’s lovely to walk around the city and spot incredible artwork all around.

The Paradesi Synagogue was built in 1568 by the Sephardic Jews who moved to Kochi in the late 15th century. It is the oldest Synagogue among the Commonwealth Nations (52 countries). Sephardic Jews came to be known as “white Jews” or paradesi (foreigner) Jews for their white skin. The Synagogue is still owned by the “white Jew” community, of which there are only five left in Kochi.

Sarah Cohen, or Sarah Aunty, as she is lovingly called, is the oldest Paradesi Jew among the five who are alive in India today. At 95, she still runs a shop of hand-stitched items with the help of her caregiver Taha Ibrahim.

Kochi is full of narrow quiet lanes fringed with trees. Since it is a smaller town with a relatively lower population, there is absolutely no traffic and it is a bliss to spend time looking at old homes and exploring the city on foot.