12 Unique Customs and Traditions in India That You Should Know 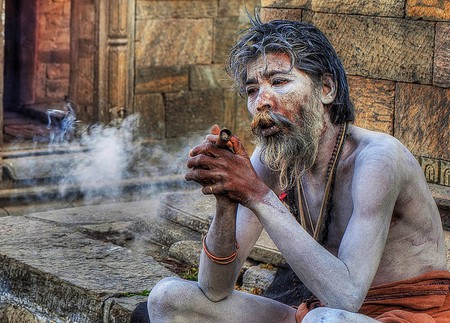 If traditions offer reassurance in the face of chaos, they can also frame what might otherwise be taboo as mystical. Join us for a giant cocktail of rituals and customs dating back to the earliest centuries of Indian civilization.

The Aghori sadhus of Varanasi

The Aghori sadhus are wondering monks who renounce all earthly possessions in order to attain eternal spiritual liberation. These ascetic Shaiva sadhus engage in post-mortem rituals such as meditating on corpses, cannibalism, keeping skulls as reminders of the impermanence of life, and smearing their bodies with ash, which is the last rite performed on a material body. Another vital ritual is a dip in the Ganges before sunrise, to cleanse themselves of all sins.

The Hola Mohalla warriors of Punjab

Founded by Guru Gobind Singh, the tenth Guru of Sikhism, Hola Mohalla is a three-day event that usually falls in March, one day after the festival of Holi. It marks the beginning of the Sikh New Year and is held in the small town of Anandpur Sahib in Punjab, turning it into a rambunctious carnival setting. It showcases the fierce martial arts of Nihang Sikhs, as well as kirtan (religious chants), music and poetry, and ends with a glorious military-style procession.

The Buddhist chanting of Ladakh

In 2012, the Buddhist chanting of Ladakh was added to UNESCO’s list of Intangible Cultural Heritage of Humanity. The tradition of Buddhist chanting is celebrated every day in monasteries and villages in Ladakh. Buddhist lamas (priests) chant and recite the teachings and philosophy of Lord Buddha for the spiritual and moral well-being of believers. The ritual is carried out in groups—monks don traditional attire and make use of bells, drums, cymbals, and trumpets. 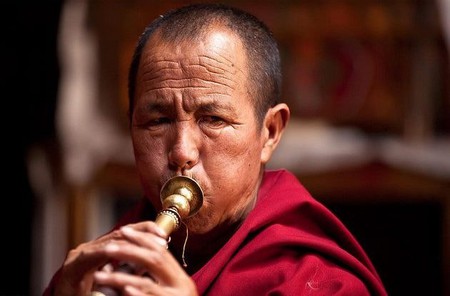 Another important tradition from India that made it to UNESCO’s list of Intangible Cultural Heritage of Humanity in 2010 is the classical Chhau dance, from Odisha. The dance is used as a form of storytelling on stage, using vivacious all-male troupes. It combines martial arts, acrobatics, athletics and its motifs highlight religious themes of Shaivism, Shaktism, and Vaishnavism. This folk dance is egalitarian and is celebrated every spring. 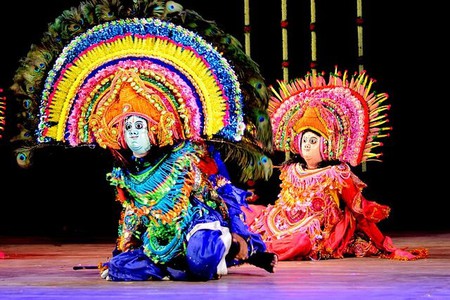 Thimithi aka the fire-walking tradition of Tamil Nadu

Also celebrated in countries such as Sri Lanka, Singapore, and Malaysia, Thimithi originated in Tamil Nadu. The festival takes place every year during the months of October and November in honour of Draupati Amman, the wife of the five Pandava brothers in the Mahabharata. Male devotees perform the ritual by walking on a sheet of burning coal while carrying a pot of milk or water on their heads for balance. The practice is a sign of utter devotion to their faith.

In Hindu culture, serpent blessings are sought to bring peace and welfare to the family. The festival usually falls during the months of July and August. Several stories about its significance have been narrated in different mythologies and folklore, including in the Mahabharata, the Sanskrit epic. On this day, serpent deities made out of silver, wood or stone are worshipped with offerings of milk, sweets and flowers, and sometimes a real snake is used. It is also considered a taboo to dig the earth on Nag Panchami as it could harm the snakes.

During the monsoon season in the middle of June, Ambubachi Hindu Mela (festival) is celebrated annually in the honour of Devi Kamakhya at the Kamakhya Temple in Guwahati, Assam. The festival celebrates yearly menstrual cycle of Devi Kamakhya aka the Mother of Shakti (power), who represents the nurturing power of a fertile land. The temple is closed for three days during the festival, as it is believed that Mother Earth becomes unclean during her period. Post its purification, the temple is re-opened, Kamakhya is bathed and Prasad is offered. Since there is no idol of Devi Kamakhya, a yoni-shaped stone is cleaned with water and covered in red cloth. 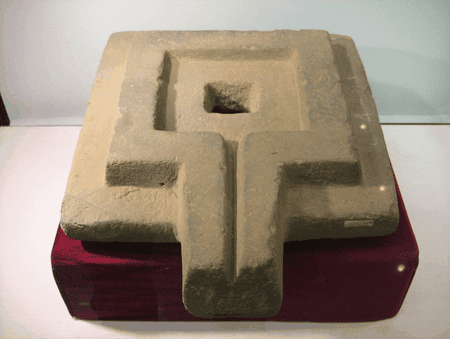 Translating as “hitting with sticks,’’ the festival is celebrated before Holi in the neighbouring towns of Nandgaon and Barsana near Mathura. This distinct style of Holi celebration is limited to these towns because of a legend. According to the legend, Lord Krishna of Nandgaon visited his beloved Radha in Barsana on this day and the women playfully chased him away using lathis (long staves). The celebratory gesture is reciprocated the next day, by the men of Barsana invading the town of Nandgaon. 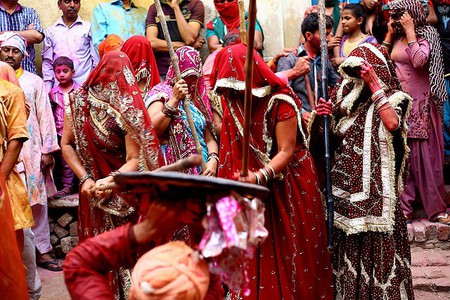 For 15 days in May and April, India beholds the largest festive gathering of transgender and transvestite individuals at Koovagam in Tamil Nadu. They commemorate their patron deity Aravan by marrying him in the temple. According to a Hindu legend, Aravan sacrificed himself in the Kurukshetra War. But Aravan wished to get married beforehand, and to meet his request Lord Krishna morphed into a woman named Mohini, who broke her bangles in despair after his death. Bangles are an important status symbol for married women in India. This bangle-smashing tradition is carried out every year at Aravan Temple in Tamil Nadu.

The Sankirtana dance is practiced by members of Manipur’s Vaishnav community at the center of a temple, where performers narrate the life and deeds of Krishna. Sometimes, the performances are so intense that it moves spectators to tears. The sole purpose of this dance and musical ritual is to gather the devotees in one place to glorify and celebrate the virtues of their God. In 2013, Sankirtana dance was inscribed in UNESCO’s list of Intangible Cultural Heritage of Humanity. 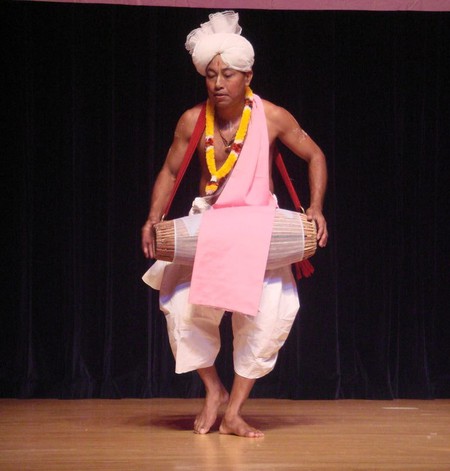 A Pung Cholom dance, which is part of the Sankirtana tradition | © Matsukin / Flickr

Wazwan, the royal cuisine of Kashmir

Many have called Kashmir heaven on earth, but only those who have visited know that there’s so much more to the region than otherworldly valleys and pashmina shawls. Wazwan is less a cuisine and more a tradition among Kashmiris. It is art served on a traem (platter) that involves a 36-course meal. The dishes are cooked overnight under the supervision of a master chef, a vaste waze. Guests sit in the group of four and share from one traem. Kashmiri Muslims invoke the name of Allah before feasting, whereas Kashmiri Brahmins pray to Lord Rudra.

The Kumbh Mela (fair) is the world’s largest congregation of religious pilgrims. It rotates between these four pilgrimage destinations in a 12-year cycle: Haridwar, Allahabad, Nashik, and Ujjain. The last Kumbh Mela was held at Ujjain in 2016 and the next one will happen in 2022 at Haridwar. The main devotees are the Naga sadhus. Their solitary and extremely harsh lifestyle revolves around a monastic way of living. The significance of the fair for Hindus is to cleanse their sins by bathing in sacred waters.