12 Mumbai Street Foods You Should Know 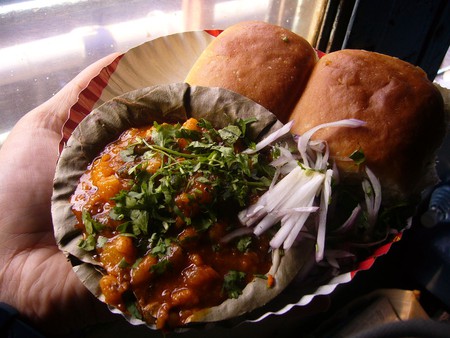 Street food options in this fabulous, diverse city can overwhelm even the most advanced foodie. Not only are there too many options featuring cuisines from around the country, and even from across its borders, but there are heated debates on which food joints in Mumbai serve the best of each. We bring you a list of 12 Indian street foods you should know, as well as where to find them!

It would be just wrong to not begin the list with Mumbai’s favorite street snack – the Vada Pav. Dubbed as the Indian-style burger by some, the poor man’s burger by others, this fabulous snack is undoubtedly the most popular and one of the cheapest meal options around the city, which is why you will find a stall on every corner of the city. Check out our list of the most popular vada pav stalls in the city featuring the likes of Ashok Vada Pav, a favourite among Bollywood celebrities, and Aaram Vada Pav which has been serving thousands of customers on a daily basis for the past 70 years.

Usually made out of puffed rice, diced vegetables and a variety of sauces including tamarind, Bhel Puri is a popular street snack sold in carts all over the country. You can head to Sharma Bhelpuri House in Ville Parle to try innovative variations of the snack. You will also find plenty of stalls selling Bhel Puri along Juhu Beach. There’s no better snack to take with you on your walk by the Arabian Sea.

Two things I miss the most! #bhelpuri

Cafe, Indian
Facebook
Email
Twitter
Pinterest
Copy link
Share
Map View
Medu Vadas are usually made from a batter heavy in lentils in a doughnut-shape, with a crispy fried exterior and melt-in-your-mouth soft interior. While it is integral to most South Indian cuisines, a small town in the state of Karnataka claims to be its birthplace. All we know for certain is that this is one of the most delicious and popular snacks in India. Café Madras in Matunga is one of the most popular South Indian joints in the city and one of the best places to grab your vada.
Open In Google Maps
Mumbai, India
Give us feedback

Much like the medu vadas, idlis are also central items to certain South Indian cuisines and one of the most popular culinary exports to the restaurants in the rest of the country. Udipi Idli House is another extremely popular South Indian eatery selling freshly steamed idlis.

Another Maharashtrian snack the city cannot function without, Pav Bhaji consists of a buttery and rich vegetable curry accompanied by buttered bread rolls. This is a strong competitor to the Vada Pav as the city’s favourite snack with a variety of interesting variations as well. Head to the Sukh Sagar in Charni Road to try one of the best prepared classic Pav Bhajis in the city.

The otherwise दुबली ( lean ) Pav Bhaaji that was patted with a teeny weeny piece of Amul butter. Okay, then I don't need to spiral down the guilt lane, do I? 🤓 #pavbhaji #amulbutter #sundaydinner

This popular snack is said to have first been served by old Bombay vendors during the early twentieth century. Consisting of a flour wrap or flatbread stuffed with diced vegetables, meat and mashed potatoes among other ingredients. Tibb’s Frankies have outlets across the city.

Only if eating junk food was a dietary requirement! *sigh* The usual Noodles Frankie and Mayo Frankie at the usual stall. The usual taste and the usual happy self post hogging ☺ Also i spotted the usual error in the spelling. Maonis for Mayonnaise. Where else can i get the best frankie in the city? I'll go figure! 🙌 #frankie #bandra #noodles #mayonnaise #snacking #snack #instadaily #picoftheday #foodphoto #foodphotography #streetsnack #streetfood #grub #nomnomnom #instasnack #foodie #l4l #instafollow #foodfood #foodies #instafoodies #munchymumbai #mumbaifoodie #foodiehub

Also known as gol gappa, this savoury snack is sold on roadside carts all over India. Consisting of a round, hollow, fried crisp called puri, a mixture of flavoured water, tamarind chutney and other items including chaat masala, diced potatoes, onions and chickpeas are poured right inside before it is eaten whole. Bhagat Tarachand in Kalbadevi is a popular fast food joint to grab fresh pani puris.

Mumbai’s favorite cold dessert is a must-have during the scorching hot summers. Made usually by mixing a variety of ingredients along the likes of rose syrup, vermicelli and pieces of gelatin with milk or water, this dessert is a must-grab before heading into the city of Mumbai for some sightseeing.

Another hugely popular cold dessert using dairy, Kulfi is said to be India’s traditional ice cream. Much more dense and creamy than the typical ice cream, this rich wholesome dessert has always come in a variety of flavors with milk cream or malai, rose, cardamom, saffron and pistachio being the traditional options.

This fried snack is a popular hit during monsoons. With a crunchy fried covering, enveloping various vegetables and onions, this is the perfect snack to munch on with your hot masala chai. Fast food and tea places across the city serve delicious variations of this snack.

Making some Pakora using our peppers from the veg patch! #pakora #growityourself #peppers

Samosas in some form or the other can be found throughout South Asia. Variations of the snack can even be found across the world. Indian samosas are mostly vegetarian, with a fried or baked covering and a savoury filling, including spiced potatoes, onions, peas and lentils. Meat samosas are also common in most parts of the country.

Mumbai’s kebab offerings are often overlooked, with the likes of Delhi, Lucknow and Hyderabad using their relatively richer Mughal heritage to claim more authenticity to their kebabs. But Mumbai’s kebabs are just as fabulously delicious as that of any other city, and are integral to the city’s rich street food culture.