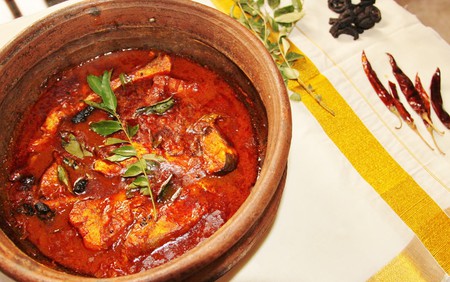 Known for its rich and generous use of coconut and rice, traditional Kerala cuisine is not to be missed. Bursting with flavours and rife with textures, the classic recipes from this southern state on the western coast of India have a huge fan following. Here are 11 time honoured dishes from Kerala, in no particular order, which have formed the culinary identity of the state.

A widely favoured combination, Puttu and Kadala curry is a common vegetarian breakfast savoured in homes and restaurants alike, across Kerala. Puttu is made of rice powder mixed with coconut and water, which is then steamed in cylindrical steel or coconut shaped mould. Kadala curry is a mildly spicy curry of black chickpeas cooked in thick, aromatic coconut gravy. The combo is easy to cook and therefore forms a go-to recipe for a quick and healthy breakfast. 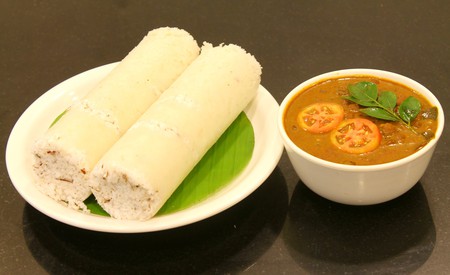 Another beloved breakfast dish for Malayalis (natives of Kerala) is the combination of Idiyappam and Egg Curry. Idiyappam is made by forming a dough of rice powder and hot water, which is then squeezed down through a mould to create thin mounds of noodles, which are then steamed. A spicy curry with boiled eggs forms a perfect foil to the otherwise bland Idiyappam. Idiyappam can alternatively be teamed up with stew or can be enjoyed by drenching it in coconut milk. It is also called Nool Puttu in certain parts of Kerala. 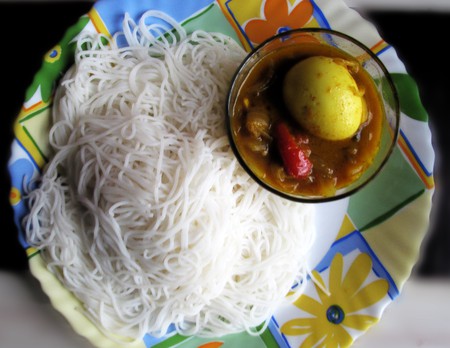 Yet another delicacy made of rice powder, these hoppers are a favoured component of meals that can be enjoyed any time – breakfast, lunch, or dinner. Appam can be combined with vegetarian gravies such as stew, and can also be a classic sidekick for non-vegetarian fare such as chicken curry, mutton, and Kerala’s favourite, beef. Best when devoured fresh, appam can lose its taste as it cools down. 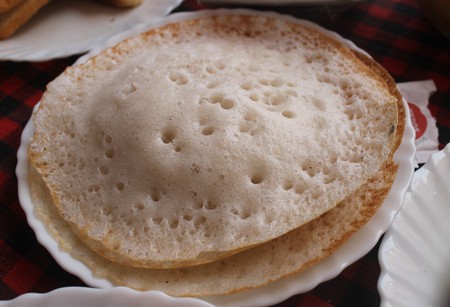 A specialty from the Malabar region in North Kerala, this is a part of the famous Moplah cuisine of the Muslims of Kerala. It is a thin round pancake made from rice flour, and is eaten in combination with curries, primarily non-vegetarian curries such as chicken and mutton. Like appam, it can be consumed at any time of the day, and requires a spicy or flavourful curry to go with its otherwise bland taste. 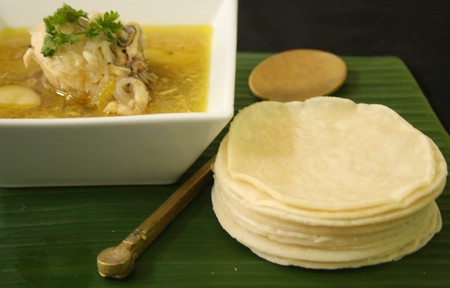 Undoubtedly one of the mass favourites of Keralites, this dish has transcended its geographical origins to cement its place in the hearts of Malayalis from all across the state. This biryani is characteristic for its intense flavours that are obtained from a whole host of aromatic spices. The biryani is a complete meal that can be had at lunch or dinner. Biryani’s variations are present all across the country, and in different forms. Just add a kick of salad or raita to go with it. 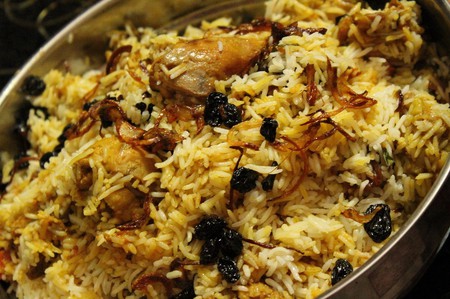 One of the healthiest vegetarian dishes, Avial is made with mixed vegetables cooked in a paste of ground coconut and flavoured with coconut oil. It is an imperative component of the traditional Kerala feast, called sadya. This is a thick and dry dish and is eaten with rice. One of the interesting stories behind the origin of the dish is that it was created by the character of Bhima from Hindu mythology, who, upon being forced to cook during his exile, chopped up whatever vegetables he could find and then cooked them together. 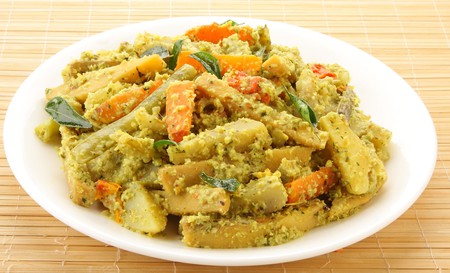 One of the most common snacks found throughout the length and breadth of Kerala, the banana chips are a favourite among Malayalis as well as people from outside. These golden and crunchy chips are made from raw plantains which are thinly sliced, left to dry in the sun, and then deep fried. A common sight in street shops all over the state, it is one of the most popular tea-time snacks served at homes and restaurants around Kerala. 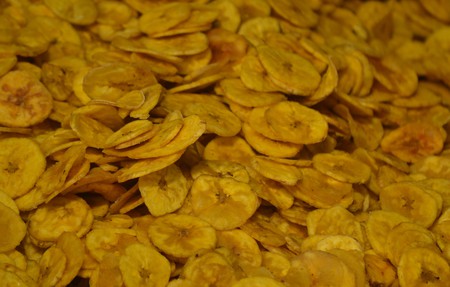 One of the all time favourite tea-time snacks all over the state of Kerala, pazham pori literally translates to fried bananas. These deep fried golden banana fritters are made from long slices of ripe plantain bananas cut length-wise, which are then dipped in a batter of flour and then deep fried in oil. The ripeness of the bananas is most crucial for this dish as it determines the perfect taste and satisfaction while relishing it. 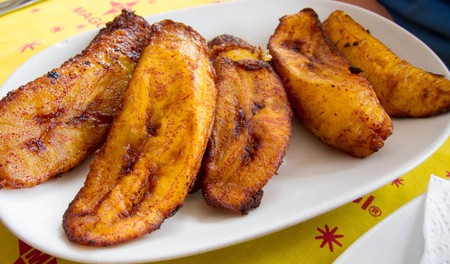 This is a delectable evening snack, originating from the Malabar region of North Kerala, yet is surprisingly little known in the rest of the central and southern parts of the state. One of the numerous enticing dishes from the cuisine of the Moplahs, it is a rich and heavy snack made by mashing ripe bananas, flattening into patties and then filling it with a mixture of grated coconut and jaggery. It is then deep fried into gorgeous golden chunks. 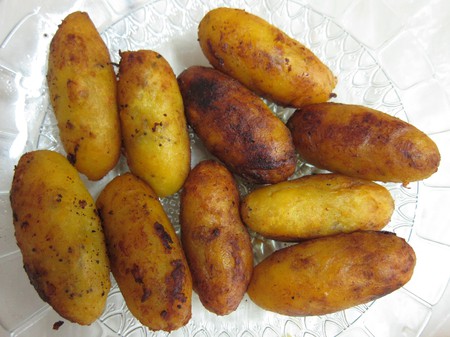 This is a dish that Malayalis around the world swear by. An intense favourite of most – if not all – Malayali non-vegetarians, there is hardly any other meal that beats the combination of parotta and beef! Parotta is bread made from flour. The dough is broken down into long strips, which are then rolled together and flattened to form a multi-layered pancake. It is then cooked over an iron pan. The beef fry or curry from Kerala is distinctive for its characteristic spices and aromas, and the addition of fried pieces of coconut that elevates its taste. 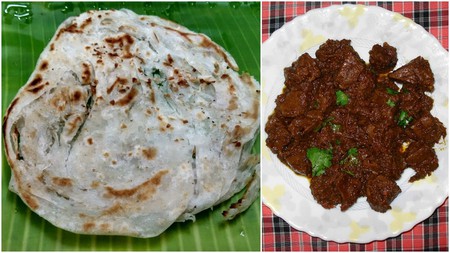 Once a staple food of a certain section of Malayalis in Kerala, this is considered to be the food of the humble folk. A simple comfort food, it is made by boiling tapioca, smashing it, and then mixing it with spices. It can then be eaten with various accompaniments such as green chilly chutney, fish curry, chicken or beef curry. Due to the naturally bland taste of tapioca aka kappa, the accompaniment savoured with it is generally on the spicier side. 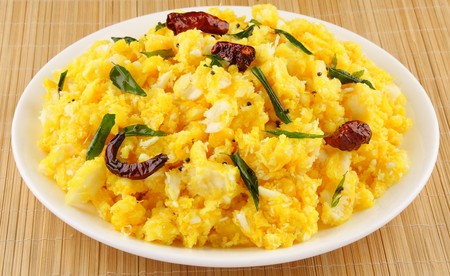