11 Mysteries in India That Are Sure to Shock You 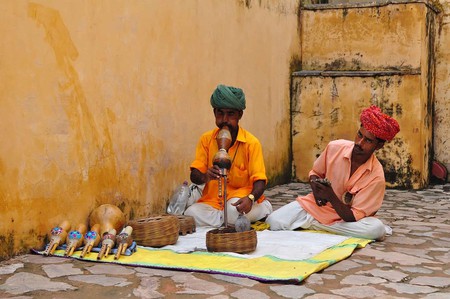 India has been called the land of mysteries since time immemorial, whether for its various enigmatic natural phenomena or eccentricities associated with its religions and culture. And while science has worked hard to debunk and find a logical reason behind every riddle, there still remain some that give rationalists a run for their money. Here are some of modern India’s most puzzling aspects that are bound to make your eyes pop!

By any metric, conceiving twins and triplets is a rare natural occurrence around the world. In fact, on average only 16 out of 1,000 successful pregnancies in the world result in twins and this average is even lower in India at just 9. However, this ratio is heavily skewed in the sleepy hamlet of Kodinhi in Kerala, which has a record 400 pairs of twins in a population of just over 2,000 families! Geneticists and scientists have long tried to explain this rare phenomenon but are only now making some headway. While experts have pointed to genetics as an obvious factor, what’s even more mysterious is that irrespective of religion, lineage or their original heritage, all families living in the village have conceived more than the average pairs of twins over the last few generations, and the number is consistently growing.

The ‘Big Temple’ in Thanjavur is renowned across the world as an architectural marvel and is one India’s 36 World Heritage Sites. While there are many imposing and majestic temples in Tamil Nadu, what makes this temple particularly interesting is its architectural mysteries that still confound many. The granite structure is popular for having one of the tallest gopurams in India and at the apex lies an 81-tonne monolithic Shikhara mounted at a height of 66 meters. While architecture and science have advanced over centuries to create much greater marvels, taken in the context of its era of construction, dating back more than 1,000 years, this aspect of the temple still baffles experts. Questions about how the heavy and huge Shikhara was mounted at such a height and how such massive amounts of granite were carried to the site with no recorded quarries in the vicinity are still unanswered. By some accounts, the tower is constructed in such a way that it does not cast a shadow at noon on any day of the year as well! 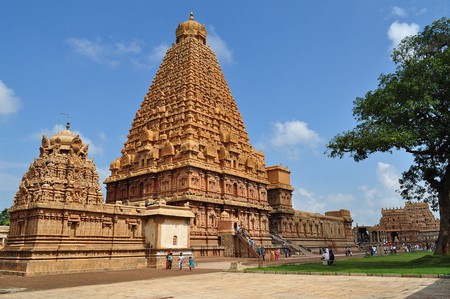 At 66 meters, the Gopuram of Thanjavur’s Brihadeeswarar Temple is one of the tallest temples in South India | ©McaSankar/Wiki Commons

India is a land of eccentric saints and sadhus, but none of these gurus have raised worldwide interest and flummoxed experts as much as Prahlad Jani, the sadhu who claims to have fasted without food or water for over 40 years. Obviously, his claims had long been taken with a pinch of salt by scientists and experts and outright dismissed by rationalists. However, in 2010, Jani was part of an extensive study by a team of 35 Indian experts from the Defence Institute of Physiology and Allied Science, which lasted over 15 days. While the study was shrouded in mystery with the government deciding not to divulge any details, it was widely publicised that the guru, also known as Mataji, was in good health despite not eating or drinking water and being in isolation for more than ten days. What’s more, it was further claimed that he did not urinate or excrete during the duration of the tests. While the veracity of this account is still an open question, it certainly has raised interest among the world’s leading experts.

While the concept of rust-resistant iron only became prominent during the industrial revolution in western civilization, there stands an iron pillar in Delhi that predates such known material technology by nearly a millennium! The Kirti Stambha or victory pillar of Delhi is a six-tonne structure that is constructed out of iron sometime in the 5th century and has stood the test of time without succumbing to rust. The science of this pillar has baffled scientists, primarily for the fact that such advanced technology for rust resistance were thought to be unknown elsewhere in the world at the time. 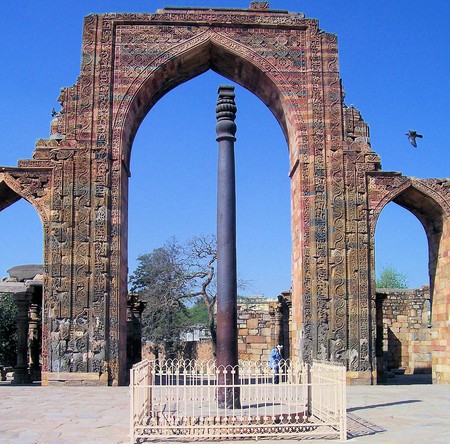 Shani Shingnapur – the village without locks and doors

If you were to visit the village of Shani Shingnapur in the Indian state of Maharashtra, your first impression would be that it is pretty confusing. Even today, no house in the village has any locks or even doors for that matter and people leave their wealth and jewelry unsecured in the open. But the more baffling aspect of this mystery is that there hasn’t been a single incident of reported theft in over 300 years. The reason, according to legends, is that the village is protected by the Hindu deity Shani (representative of the planet Saturn) and that any thieves who beset this village will be immediately punished by losing their sight. The tradition runs so deep that the village now even has banks and police stations that are ‘lockless’! 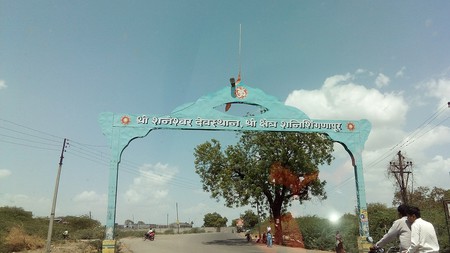 Temples in India are repositories of many of the country’s existing mysteries, both religious and architectural. But none have garnered the kind of interest for eccentricities as the Lepakshi Temple of Andhra Pradesh. While the nearly 500-year-old temple is an architectural wonder and also a site of national importance, the one particular attraction that has caught the most attention is the famous Hanging Pillar of Lepakshi. In the center of the temple structure that consists of more than 60 pillars, there exists one beautifully carves stone pillar that does not touch the ground! Hanging just a few centimeters above ground, the science behind it is yet to be sufficiently examined, but whether by design or by a freak of nature, the hanging pillar definitely constitutes an unsolved mystery unlike any other in India. 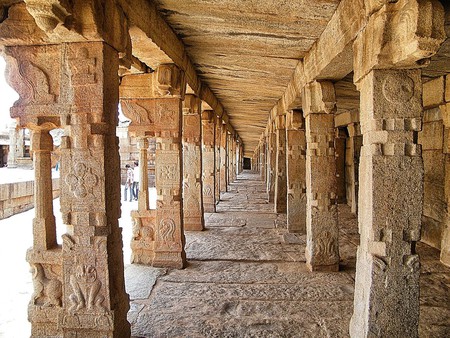 Son Bhandar Caves, a pair of rock-cut structures located at the foot of the Vaibhar Hills are an exquisite site indicative of India’s ancient culture and are well worth a visit. This has been home to several Hindu and Jain monks, who are said to have meditated here. However, the most interesting aspect of this cave is its legend of hidden treasure. According to lore, the western cave was the resting place for the wealth of Mauryan King Bimbisara who ruled in the 6th century BC with Rajgir as his capital. Legend has it that Bimbisara hid his vast treasure here to protect it from his son who usurped his throne – and the gold has stayed put here for more than 2,000 years. Taken by the legend, the British allegedly tried to cannonball their way in but only managed to leave a damaged relief on the cave interior that is still visible. 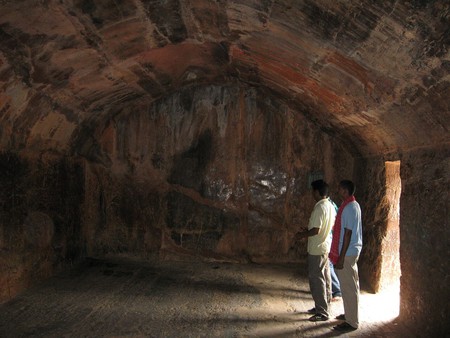 Sentinelese of Andaman and Nicobar

North Sentinel Island in the Indian archipelago of Andaman and Nicobar is home to what is widely believed to be the ‘most isolated tribe in the world’. While there are several uncontacted peoples in several parts of the world, what makes the Sentinelese special is that unlike most other tribes, they remain uncontacted not because of geographical isolation, but rather primarily because they actively reject it and even use violence against those that try to establish contact. According to recent research, the language and culture of the Sentinelese do not bear resemblance to any others in the vicinity, leading to the premise that they have possibly remained without contact with the outside world for thousands of years. 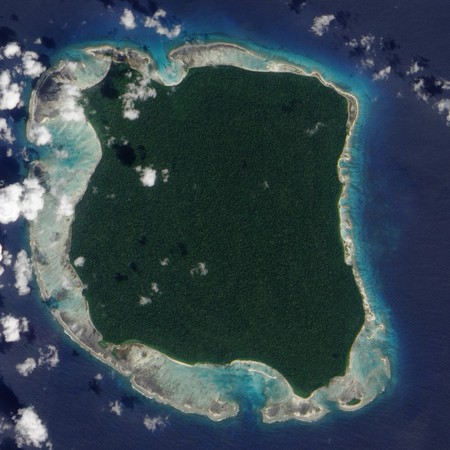 Shetpal – the land of snakes

India has a long tradition of worshipping different animals as embodiments of deities associated with them and one of the most popular among them is the magnificent king cobra. However, nowhere else in India are cobras more revered than in the Maharashtrian village of Shetpal, where they roam free and wild in astonishingly large numbers. But what is most startling about this quaint hamlet is that despite the large number of poisonous snakes that roam unfettered even near children and the elderly, there have been almost no recorded cases of snakebite-deaths among the locals. Whether it has to do with their own immunity or a symbiotic bond that has been developed with the snakes, the village of Shetpal definitely defies the reputation of cobras as harbingers of death.

Seen from afar, Roopkund Lake in the Uttarakhand state of India is just as picturesque as any of the other icy attractions in the Himalayas. However, a closer look reveals a spine-chilling detail – over 200 skeletons resting at the bottom of it that are mostly still visible. This mass grave has long-confounded researchers and has given rise to several stories and legends about this place that mostly relate to the anger of the gods. However, after being shrouded in mystery for a long time, in recent years researchers have found that the skeletons belong to pilgrims who were hit by a violent hailstorm sometime during the 9th century AD (approx 850 AD) that spewed hailstones the size of cricket balls. 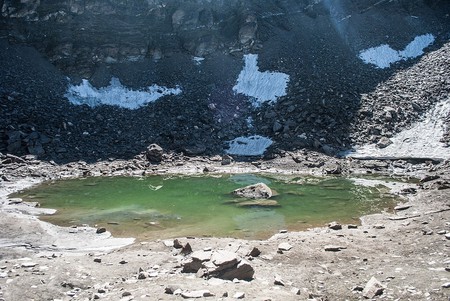 The shallow Roopkund Lake dries up in summers to reveal its horrific lake-bed! | ©Shwiki/Wiki Commons

This remote village located in the state of Assam is home to one of the most baffling phenomena in nature. Every year, during the end of the monsoon months, birds of several species such as the tiger bittern, little egret, and pond heron, apparently ‘commit suicide’ by hitting against bamboo poles in the area. While birds are usually great navigators, this phenomenon came to global attention in the 1960s after several expeditions. There have been multiple explanations for why this happens such as disorientation and fog build up. However, experts are yet to arrive at a more concrete explanation.