10 Types of Biryani You Need to Try in India 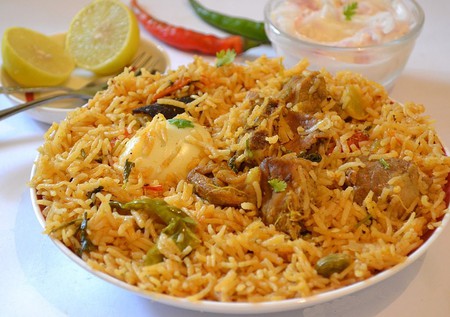 Aromatic and bursting with flavours, Biryani is a wholesome meal you shouldn’t miss out on when in India. Having said that, every place in the country has its own unique take and variation on this classic dish. Some might be tangy, others less so, but they’re all worth sampling. Here are 10 types of Biryani you need to try.

Believed to have originated from the kitchen of the Hyderabad’s Nizam, there are two types of Hyderabadi Biryani – Pakki (cooked) and Kacchi (raw). The Pakki Hyderabadi Biryani involves cooking of basmatic rice and meat separately and then layering them together. While the kacchi Hyderabadi Biryani is made from the raw marinated meat (chicken or lamb) placed between the layers of basmati rice infused with saffron, onions and dried fruits, both are slow-cooked in a dough-sealed earthen pot over charcoal fire, which results in rich, aromatic and punchy biryani. If you go out for a meal with a local, more likely than not, you will have either one of the variants of Hyderabadi biryani. 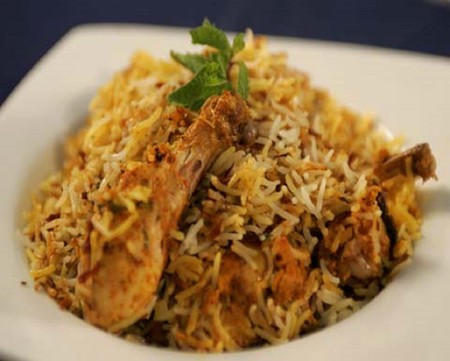 Also known as the ‘Awadhi biryani’, the Lucknowi Biryani stands out due to its cooking style, known as dum pukht. The meat (or chicken) infused with spices is partially cooked separately from rice, which is flavoured with saffron, star anise and cinnamon. Both the meat and rice are then layered together in a handi (deep-bottomed vessel) and cooked for hours until the flavours deeply penetrate. The end result is soft Lucknowi biryani with mild flavours. 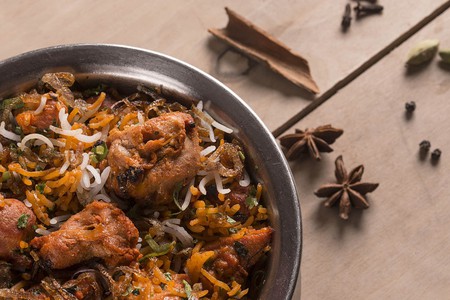 Lucknowi, or Awadhi biryani stands out due to its cooking style, called dum pukht | © Ravichouhan208 / WikiCommons

Calcutta Biryani originates from Kolkata, although it has roots tracing back to the Awadhi style biryani of Lucknow. Characterised by subtle flavours with a tinge of sweetness and more sparing use of spices, it is cooked with light yellow rice, which is layered with yogurt-based meat, soft boiled eggs and potatoes. Add to that, saffron, nutmeg and kewra, which lends a soothing aroma to the biryani. 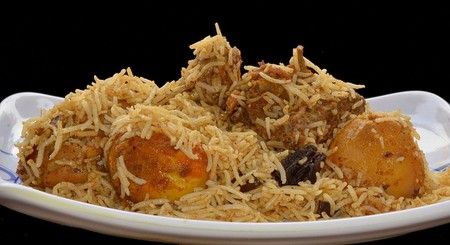 Calcutta (or Kolkata) biryani has soft boiled eggs and potatoes in it, along with meat and rice | © Biswarup Ganguly / WikiCommons

Sweet and spicy, this biryani hails from the Malabar region, specifically Kerala. The variation of biryani in this region is as plentiful and diverse as the cultures and ethnic groups within. The Thalassery Biryani, for instance, makes use of an indigenous variety of rice – Khyma or Jeerakasala – instead of the basmati rice that is used traditionally. Other ingredients used in this biryani include Malabar spices, meat or chicken, fried onions, fennel seeds, sauteed cashews and raisins. The Khyma is cooked separately from the meat, and mixed together only at the time of serving. 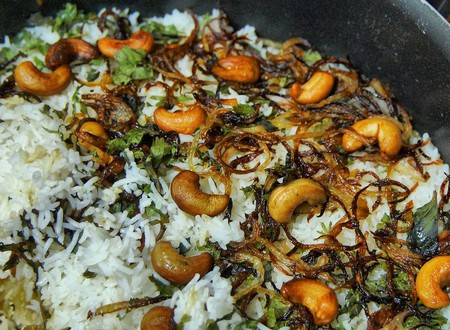 Bombay Biryani is worth the trip to Mumbai in itself. It is composed of chicken (mutton or vegetables), fried and spiced potatoes, kewra water (screw pine) and dried plums that make the flavour distinctively sweet, tangy and aromatic. 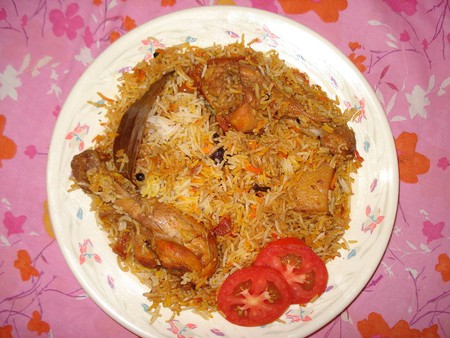 Sindhi Biryani is a dish that originated in Sindh province (now part of Pakistan), hence the name. This biryani is made from the generous use of chopped chillies, roasted spices, mint and coriander leaves, onions, nuts, dried fruits and sour yogurt, making the flavour piquant and aromatic. Added to this biryani are plums and potatoes for good measure. 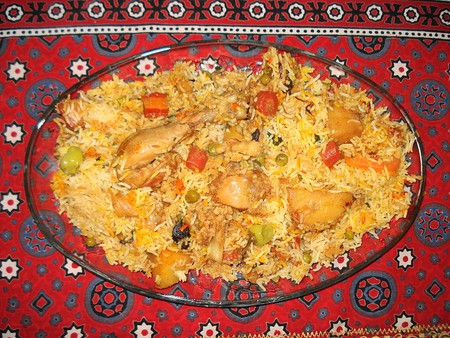 Kalyani Biryani, the ‘Poor man’s Hyderabadi biryani’ as it is often dubbed, is said to have originated from the Bidar city (Karnataka). Consisting of buffalo meat and an array of spices, coriander and tomatoes, the Kalyani biryani is flavourful and tangy. Although it doesn’t have ingredients like the popular Hyderabadi biryani, the taste and pleasant aroma remain the same.

Dindigul Biryani is an ever-popular dish that can be found at several outlets across Chennai. It is strong and tangy in flavour, which is derived from curd and lemon, mixed with cube-sized meat (mutton or chicken) and jeera samba rice. Also, a lot of pepper is used to give it a full-on zesty flavour.

Ambur Biryani is an unmissable travelling experience in itself when visiting Tamil Nadu. Like other variations of biryani, this one also has meat (chicken or mutton), but what makes it different is the way the meat is prepared. The meat is soaked in curd and flavoured with coriander and mint, and then added to the cooked Seeraga samba rice, along with other spices. Savouring it with brinjal curry, ennai kathirikai, is every biryani-lover’s delight.

The traditional biryani is made from meat, but Tehari biryani is served without it. Legend has it that this biryani was created for the vegetarian Hindu bookkeepers at the Mughal court, and since then, it has become one of the popular dishes among vegetarians across the North India region. This biryani consists of potatoes, carrots, several veggies and an array of spices, making the taste hearty and savoury. 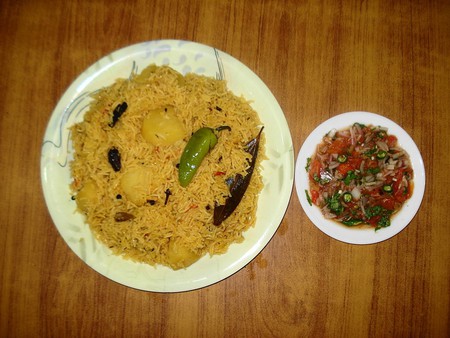