10 Things to Know Before Attending a South Indian Wedding 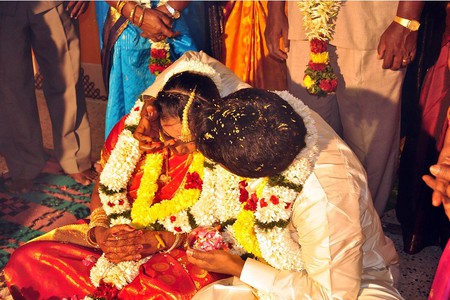 Attending a South Indian wedding is an experience unlike any other and is a direct window into the rich culture and elaborate traditions of the South. However, like it always is before attending any traditional affair, it is necessary to do some homework so you don’t get thrown off (both figuratively and literally!). So, if you’re prepping your best sherwani (first mistake) and getting ready to attend a South Indian wedding, here’s everything you should know before you show up.

If you think you know everything there is to know about Indian weddings just because you’ve binge-watched a bunch of Bollywood movies, you’re dead wrong. Not only are North and South Indian weddings culturally different, they even feature vastly different dressing styles. If you’re thinking of getting yourself a slick sherwani and showing up at the wedding dressed like Shah Rukh Khan, you’re going to stick out like a sore thumb. The traditional attire that usually passes for a South Indian wedding guest is a white shirt and a veshti (a silk Dhoti). However, wearing a veshti is often just as complicated as draping a saree. So, if you don’t want it to come off in the middle of the event, make sure you get help from someone who knows how to tie one. 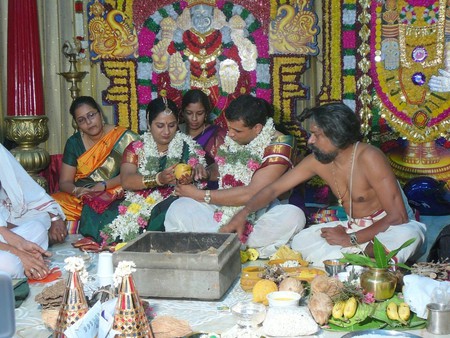 Wake up early or miss the show

Picking a date and time for Indian Hindu weddings is done according to the alignment of the stars and traditional calendars. Often times, the time for the actual wedding ceremony can be as early as 4 am! So if you don’t want to miss the main part of the wedding, make sure you know when the Muhurtham or auspicious time is and wake up early. 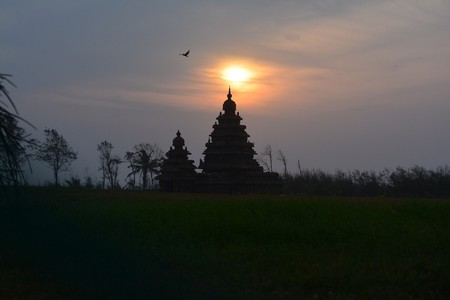 Unlike weddings in other religions or customs, which usually take a day at maximum, pre-wedding and follow-up rituals for a South Indian wedding can last several days. Traditionally, in some customs, such as with Telugu weddings, they used to last up to a maximum of 16 days! However, in recent years, this has come down to two or three in most South Indian customs. Each day signifies a particular theme and has set rituals to it and weddings can also be quite long depending on the status of the family.

It’s going to be loud

Indian weddings across the country are pretty loud affairs and rituals are always accompanied by music. However, we’re not talking about some DJ in the corner dishing out Bollywood numbers, rather, the music that will be played will often be some form of classical instrumental music. While in North Indian weddings, it is the shehnai, in South Indian affairs, it is usually the nadaswaram (a double reed wind instrument similar to the shehnai) accompanied by a mridangam and other percussion instruments.

Practice eating with your hand

One of the most difficult things to adjust to at a South Indian wedding, particularly if you’re a Westerner, is the fact that guests don’t use spoons, or any cutlery for that matter, while eating. This is because the food at South Indian weddings is served in a traditional manner on a banana leaf and it is traditionally supposed to be consumed using your hand. You may request a spoon and use it, but if you don’t want funny looks from everyone around, you’d better practice eating with your hand. Another thing to remember is that South Indians, especially the older ones, scoff at the practice of using two hands, so use only the right one! 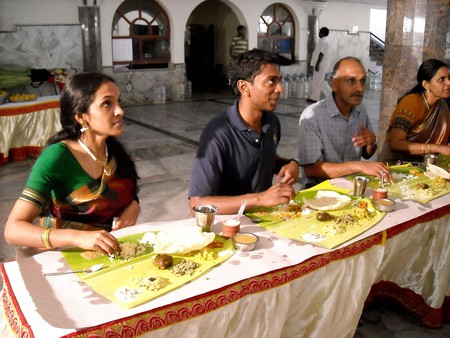 There is a right order to eating

South Indian wedding meals are one of the best parts of the whole event and are particularly elaborate affairs that are given the most attention to by the hosts. In most cases, there could be up to a dozen items on the menu and almost all of these are served at the same time on a single banana leaf. While the first item that is placed is usually a sweet, it’s customary to not start eating before every item is placed on the leaf, so control your sweet tooth for a while. As for the main course, the usual order is three courses of rice, the first with sambhar, the next with rasam and the last with buttermilk or curd. The cup with payasam (a form of South Indian rice pudding) usually serves as dessert and is supposed to be consumed at the end of the meal. 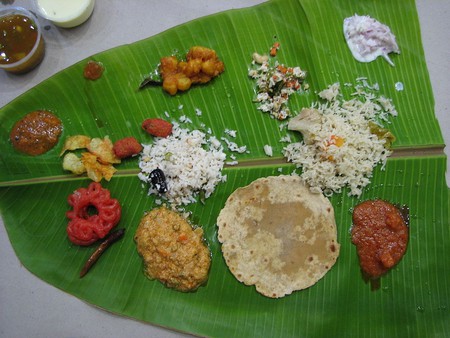 If you just enjoyed your full-course South Indian wedding meal and notice people giving you weird looks as you are walking away from the table, it might be because of the way you folded your banana leaf. While it might be a strange and simple custom, the side on which the banana leaf is folded after the meal is deeply symbolic to South Indian culture and can even be construed as a slight if done the wrong way. While some cultures differ in their interpretation, the rule followed by a majority of South Indian cultures is that you take the top portion of the leaf and fold it over the lower portion. This signifies that you enjoyed the meal and doing it the other way may be construed as a complaint! 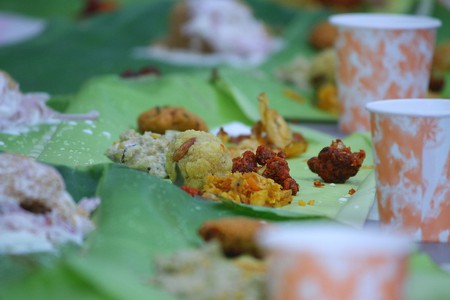 While South Indian weddings are more sombre compared to Punjabi or North Indian ones, that doesn’t mean there can’t be any fun and not all the rituals are about serious prayers and promises. A number of pre-wedding rituals in South Indian weddings often involve games that are played between the bride and the groom, with guests taking part in supporting the two. While most of these are silly and fun, such as the couple trying to get a coin out of a pot of milk at the same time or trying to evade a garland from their partner, the basis of these games is to help the couple become comfortable with each other, since most South Indian weddings are arranged marriages. 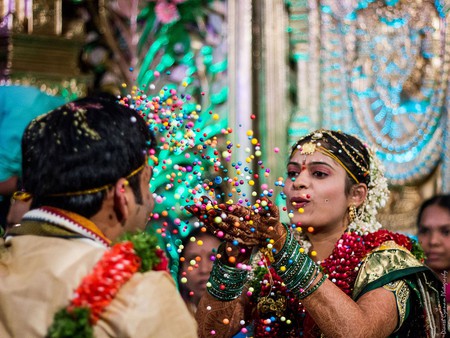 If you’ve already bought something for the couple and are going with a well-thought-out gift, there isn’t anything to worry about. However, in case you haven’t bought anything and are planning to get away with simply gifting money, that is just as acceptable too, as long as you follow one critical rule. Traditionally, gifting money is considered to be an important custom to help to new couple start their lives together. However, according to the custom, the amount of money gifted should always be an odd number since even numbers are considered inauspicious. The simplest way to go about this is to add a one rupee coin to whatever amount you’re giving and give it to the couple in an envelope.

Since arranged marriages still very much exist in South India, elders of the family often take the job of searching for an eligible bride or groom very seriously during weddings. Someone’s wedding is always a market-ground for someone else’s future wedding. And if you’re an eligible bachelor or bachelorette, there’s a good chance that you’ll be at the receiving end of probing questions. Moreover, marriages in South India are decided by something called a Jathakam (birth chart), so don’t be surprised if someone asks you for your date of birth out of the blue!