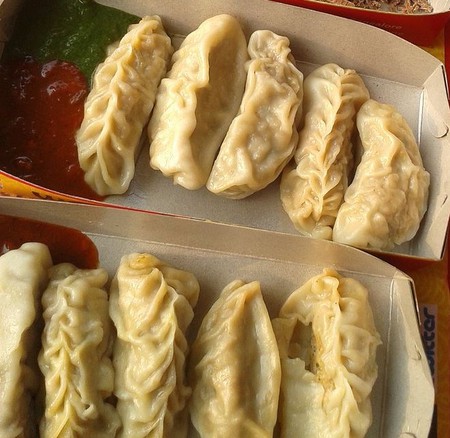 Kolkata’s culinary scene is rich, vibrant and ever-rewarding to any food connoisseur. It isn’t just in traditional kitchens or legendary restaurants where you’ll witness the dynamism of Kolkata’s cuisine – the city’s street food culture is a world onto itself. Here are ten street food dishes you shouldn’t miss out on while in Kolkata.

You can’t sample Kolkata’s street food without trying the local momos or dumplings. With stuffings of vegetable, chicken, pork, and fish, these steamed or fried buns can be had for breakfast, lunch, dinner or as just a snack.

Enjoyed by vegetarians and non-vegetarians alike, these delicious and hearty flatbread rolls stuffed with assorted savoury fillings have gained popularity across the globe by now. But you shouldn’t miss out on a chance to try them at their birthplace – Kolkata! Said to have been founded at Kolkata’s historic Nizam Restaurant, the roll in its original form included kebab meat stuffed inside a rolled parantha for convenience and portability.

Chhanar Jilipi is a local variation of one of the country’s most popular sweets – the jalebi. Translating to ‘cottage cheese jalebi’, the delicious snack is one of the finest sugary pick-me-ups you can indulge in at a street-side food stall in Kolkata.

Similar to what are known as pakoras around the rest of the country, this deep-fried snack is a Kolkata classic you shouldn’t miss out on. Consisting of vegetables (often potatoes) or meat dipped in a batter and then deep fried, the snack is a great accompaniment to tea in the evening.

Made from dried peas, this delicious and savoury street snack is immensely popular in Kolkata. The dish consists of peas cooked along with a range of vegetables and spices and is served in little bowls ready for you to devour them on the go.

Consisting of chopped fish and vegetables mixed and reshaped into little discs which are then dipped in a batter and deep fried, this lip-smacking treat is a hearty snack you will find on street side food stalls across the city. Sometimes the dish is made by just dipping fish fillets into a batter and then deep frying them.

This local variation of the dahi vada involves deep fried balls of minced meat served along with sweetened and spiced yoghurt. Keemar Doi Bora is a true Kolkata special street snack – and one you shouldn’t miss out on.

Kolkata’s own version of the deviled egg, the Dimer Devil consists of a hard boiled egg with a spicy, deep-fried coating of minced meat and other ingredients. The heavy, high protein snack is perfectly portable for when you’re on the go.

This unique-to-Kolkata beverage is prepared by mixing milk along with aerated soft drinks or colas. Served cold with ice in tiny clay cups, this creamy drink is most famously sold at Balwant Singh’s Eating House in Bhawanipur.

This savoury street snack is made of puffed rice mixed with a variety of ingredients including onions and chilli. The mixture is served on little paper pouches or plates by street food vendors all over the city.

Spicy tangy Jhalmuri or puffed rice on the streets of Calcutta, by New Market, during a tour of the area's food with @iftekharahsan. It's cold, grey and rainy in London so I am reliving my recent weeks of sunny bliss. Hand model @poojavir_ #indianstreetfood #calcutta #calcuttawalks #jhalmuri #flashbacksunday