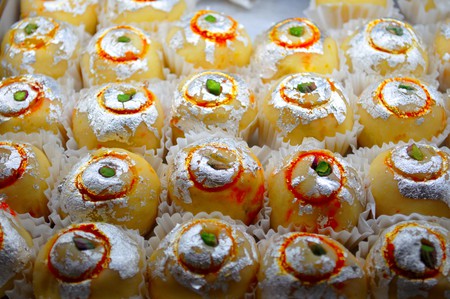 Meetha, or sweet dish, is how desserts are referred to in India. The culinary world is always evolving with new restaurants serving exotic food from different parts of the world. As we have become more accepting to European coffee culture, we are also open to experimentation in terms of dessert options. In fact, now there is a fusion of new flavors and ingredients with old desserts to suit a more sophisticated and Westernized palate; therefore, today we shall give a pass to the ubiquitous gulab jamuns, rosogollas and gajar ka halwas found on any restaurant menu.

Imarati/Jaangiri looks akin to jalebis but with an intricate flower-like appearance. It is made from urad dal along with saffron, which renders it its light orange color. After being deep fried in ghee (clarified butter), it’s soaked in sugar syrup for sweetness. It is then drained and served cold or at room temperature.

You will find this delicacy served on the streets in many places in the North and also in weddings. The light orange color of this sweet is a good match for the festive mood and the various hues in any street of Northern India.

Puran poli is a sweet stuffed poli (chapatti), which is eaten as a main course on Holi. It is a part of the Maharashtrian household, and the one who can prepare this dish is recognized as a culinary expert.

The puran poli is not very sweet because it has the perfect balance of mixing the soaked, cooked chana dal (Bengal gram) with jaggery (gur). This mixture is blended well and stuffed into whole wheat dough. The whole wheat dough is well oiled so that the crust is flaky and soft. It is then roasted lightly on a pan. The puran poli is eaten with melted ghee or warm milk.

Come Makar Sankranti and everyone plans to make the sweet that will fortify them against the cold weather while bringing smiles to their faces.

We know the Bengali rosogolla and cham cham, but most of us are not aware of their addictive cousin, the Pati Shapta. The Pati Shapta closely resembles a crepe filled with a coconut and condensed milk mixture flavored with cardamom.

The lightness of the crepe complements the sweetness of the coconut. Apart from that, the grated coconut also imparts a texture to the dish, making it a filling snack for in between meals. Pancakes and waffles will surely take a backseat once you sample this homemade sweet.

Mysore pak is a very simple dessert made of ghee, sugar and besan. However, the effort in making this piece of heaven is herculean since besan is fried in copious amounts of ghee over a slow fire and then drenched in sugar syrup. Mysore pak was first prepared in Mysore Palace for Krishnaraja Wadiyar – it’s truly royal.

The besan, ghee and sugar transform to become a small piece of heaven that melts in the mouth. The best way to sample this is to be on good terms with your friends from Karnataka, and someday, you will end up with a box or two of this treat.

Usually, halwa is a sweet confection that is made from semolina (rawa), ghee and sugar. Sometimes nuts like almond halwa and usually vegetables are added to make carrot halwa (gajar ka halwa) or dudhi halwa (bottle gourd).

The halwa below is made from cornflour, ghee and sugar syrup, giving it a rubbery consistency. The nuts seem firmly embedded in the halwa, and eating it is a dental stretch because of the rubbery texture. The trick is to suck on the juicy halwa, which can become addictive due to the simplicity of taste. This delicacy originated in Karachi, Pakistan and since then, feature in a large part of Indian festivities.

When grandmother comes to visit, it is malpua time for most of us. Malpua alternates as a dessert and a snack and is prepared in Northern and Eastern households. It is also served as a ‘bhog/prasad’ (offering) in some holy temples and made differently in different parts of India. Malpuas are consumed in Bihari households during Holi, while Bengalis prepare it during Paush Sankranti.

It is made by deep frying the batter and then dipping it in sugar syrup. The method of the recipe also differs with the usage of fruits or sweetening the batter before frying. All in all, malpua is a rich, wholesome snack and rightly a part of the Chappan Bhog (56 offering) at the Puri temple.

Malpua also becomes a part of the Iftar post-Ramadan, and one may find lots of busy streets in the city, especially specific Muslim areas where one can get a taste of this divine dessert.

Nolen gur, or jaggery, made from date palm reminds us of Ras, a story by Narendranath Mitraon on which the 70’s movie Saudagar is based. Nolen gurer sandesh is a relatively healthy dessert because of date palm jaggery and cottage cheese. The taste is milder than most of its counterparts that ooze with sugar syrup once bitten into. This dessert highlights the subtleness of flavors, which is a pattern in Bengali cuisine.

Coconut is a versatile ingredient that can be used to give texture to vegetarian and non-vegetarian curries, as a garnish and also sometimes as a standalone ingredient in sweets.

Coconut barfi and laddoos are usually tiffin box treats for kids or last minute desserts for unexpected guests. The taste of coconut and sugar works well, making it a comfort food on its own.

Maharashtrians make coconut barfis during Narali Pournima, in the month of Shravan, while the Bengalis make them during Holi.

It is an addictive sweet that you’ll want until you die.

Modak is the offering for Lord Ganesha, to appease him and seek his blessings. The mithai version made of khoya and sugar are commercialized during Ganesh Chaturthi because of its sustainability and ease of preparation.

The real deal, however, is the dumplings made of rice or wheat flour and filled with coconut and jaggery, scented with cardamom and saffron. This hearty filling makes modaks the most sought-after dessert due to the exalted state one reaches after taking the first morsel, breaking your fast. This snack is lighter on the stomach because of it being sugarless and only with minimal amounts of ghee or other fat. Hence, the first morsel to break your Chaturthi/Sankashti fast is that of modaks.

The culinary prowess, especially that of a Maharashtrian woman, is tested in the way that she shapes her modaks. The steamed versions are sold in a limited number of sweet shops and typically only in Maharashtrian localities. Hence, when a friend of yours shares a steamed modak with you, they are for keeps (for obvious reasons).

Not many of us have heard of this dessert. It’s a lesser-known Maharashtrian dessert made of jaggery and colostrum. The colostrum can belong to either a cow or buffalo. It is mixed with regular milk and saffron. This colostrum is then steamed like rice in a pressure cooker, flavoring it with cardamom and saffron.

This dish is a kind of vegetarian pudding made in Maharashtrian households, depending on the availability of colostrum. Ironically, it is said that its best avoided by expectant women as it generates heat in the body.