10 Breathtaking Sites In India You Must See Before You Die 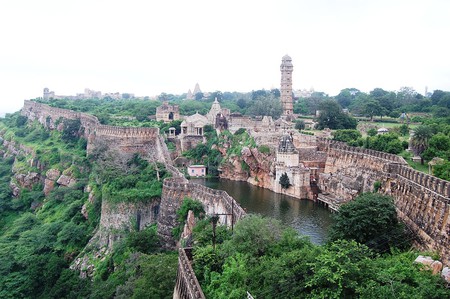 With its rich history, and geographical and cultural diversity, India has plenty to offer the hungry, curious traveler. From forts and temples, to the natural beauty of caves, mountains, deserts and islands, we’ve made a list of ten unique sites in India that you must aim to visit at least once in your life.

With breathtaking architecture and design, as well as rich and complex histories, this group of forts in Rajasthan are a must-visit for anyone seeking to experience India. Together an UNESCO World Heritage Site, the individual forts are the Chittorgarh Fort, the Kumbhalgarh Fort, the Ranthambore Fort, the Gagron Fort, the Amer Fort and the Jaisalmer Fort. Based on the Aravalli Range of mountains, these forts were built over centuries, from the earliest going back to the 5th century C.E. and the latest during the 18th century C.E.

These ancient caves are among the most well known and celebrated custodians of India’s ancient and rich culture. Ajanta – estimated to have been constructed between the 2nd century B.C.E. and 7th century C.E. – consists of about 36 separate caves which served as Hindu, Buddist and Jain places of worship. Ellora – a few hours away from Ajanta – is the largest rock-cut monastery-temple cave complex in the world. With intricate stone carvings, exemplary design and important historical significance, these caves are too unique for you to miss out on.

The Nubra Valley is located about 150 kilometers north of Leh, the majestic capital of Ladakh. Formed by the meeting of rivers Shyok and Siachan, the valley stands in between Ladakh and the Karakoram mountains. The ancient Karakoram Pass, through which caravans used to cross into Xinjiang in China during the heyday of the Silk Road, lies to the northwest of the valley. With breathtaking views of mountains, the bluest skies and with remnants of yesteryear’s glorious cosmopolitan Asia, this is a place unlike any other in the country and therefore every bit worth visiting.

This city on the banks of the Ganges – considered sacred by Hindus – in the state of Uttar Pradesh is one of the oldest living cities in the world. According to available archaeological evidence, settlement in Varanasi can be traced back to the 20th century B.C.E. Considered the spiritual capital of India, it is one of the holiest cities in Hinduism and Jainism. Furthermore, the Buddha is said to have given his first sermon after having attained enlightenment just eight miles away in Sarnath, thus founding Buddhism. You cannot quite complete your India experience without having taken a boat ride along the Ganges in this ancient city.

Beauty in chaos. This exclusive behind the scenes shot comes from the busy Ganges riverbank in Varanasi. #WaterWednesday

The Great Rann of Kutch

This seasonal salt marsh in the Thar Desert is a breathtakingly beautiful sight that everyone should aim to see at least once. It is the world’s largest salt desert spanning more than 620 square miles, which goes underwater during monsoons. Located in the Kutch district of the state of Gujarat and bordering Pakistan, this stretch of the desert has one of the most beautiful sunset views in the country.

The world’s biggest river island, Majuli in the state of Assam is a cultural hotspot just as it is a natural marvel. Being host to several of Assam’s religious and cultural festivals and events, this lush green island on the Brahmaputra River is one of India’s most unique offerings.

This 19th century mosque in Bhopal, Madhya Pradesh is India’s largest mosque with its interiors spanning about 430,000 square feet. With an iconic pink façade, topped by two 18-storey high towers with marble domes, this beautiful structure is an architectural masterpiece that everyone should take the time to gawk at at least once in their lives.

Made by getting the aerial roots of trees to grow through betel tree trunks placed across rivers, these old root bridges have been serving trusting locals in several parts of the state of Meghalaya for centuries. Though the bridge may take up to 15 years to make, they last for hundreds of years. You can find them in Cherrapunji – dubbed the wettest place on Earth due to the heavy rainfall – as well as nearby towns of Tynrong, Mynteng, Nongriat, Nongthymmai, and Laitkynsew, among others.

The mesmerising double decker living root bridge! The art of making these living root bridges is hard to master and only a handful of families exist who can create this work of art which takes roughly about 15-20 years to make it usable Easily one of the best places I've ever visited. Serene pools, natural extremely safe bridges, extremely dangerous man made bridges, the very generous Khasi people and the simple food is something I'm going to miss #trektales #mytrektales #india #meghalaya #livingrootbridges #adventure #trek #hike #incredibleindia #mothernature #nature #water #green #beauty #love #insta #instamood #instapic

This historic temple in Tamil Nadu is famous for its musical pillars. Carved out of a single stone, and standing at 18 feet high, these pillars emit various musical notes when they’re struck. The centuries-old temple also features exquisite sculptures and carvings. Its 130-foot façade filled with detailed sculptures of various Hindu deities is nothing short of breathtakingly beautiful.

The Khajuraho Group of Monuments

This UNESCO World Heritage Site in Madhya Pradesh consists of a group of Hindu and Jain temples built between 950 and 1050 C.E. by the Chandela dynasty which then ruled central India. While some 85 temples were once said to have stood at the site, there are only 20 remaining today. The elaborate carvings, sculptures and incomparable designs of these structures makes them a site you should aim to visit at least once in your life.