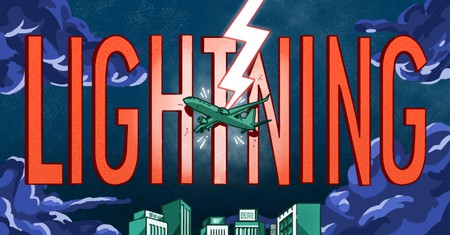 Stirred by her granddaughter’s romantic zeal, a woman reflects on a long-lost lover in Xu Xi’s Hong Kong story ‘Lightning’.

Afterwards, everyone spoke of speed. That slanted flash, like a chef’s rapid flick-­flack blade. Filleting a fish, butterflying a steak. It razored the plane at an angle, cleanly through the fuselage.

The plane had just ascended, inclined 25 degrees after lift-off. The bolt from the blue split it open. Engine and forecabin in flames. Bodies fell, a few charred beyond recognition. Some died as much from fright as from injury. All three of the flight crew lived.

That drizzly Tuesday afternoon in the summer of ’68, she saw the whole thing from the outdoor observation deck at Kai Tak. No one was out there to witness either her private heartbreak or the murderous flash. She was seeing off her lover, or rather, seeing off his plane. He, on board with his wife, headed home to Connecticut, perished, but the wife survived, crippled for life.

Days later, she, the mistress, wondered if it had been a dream. The plane crash was real enough, headline news. Her pinprick city captured the world’s imagination for a brief while because of this “inexplicable” disaster. For years, she read the investigative reports, searching through the pages for any mention of what she witnessed. Nothing. Climatic conditions yielded no proof and a light rain was not grounds for lightning. Despite that, she willingly suspended disbelief. A spectacle, indelible.

On board a flight from Heathrow to Chek Lap Kok, the arrival announcement awakes her from a dream. Less dream than memory, of the last night spent with her lover, a week before departure. Her eyes are wet, even though she hasn’t thought of him in years. Yet his voice is making her cry all over again as if she were still twenty, still in love despite what he says. I’ll pay for the abortion. The looping memory of their last conversation.

It’s 2018. A grey shroud surrounds her city. It’s always grey skies now. Landing bump and her cell phone beams. A text from Amber, her granddaughter – Granny, i m here c u soon! Excited!! She is happy, of course she is, to be seeing her daughter’s child again. Amber grew up in Hong Kong and Canada. Nineteen and a half, an intern at an “international art investment brokerage”, whatever that is. Her university studies in visual communication frighten her parents, who believe Amber will never find work. They were SOOOO wrong, Granny! Tks 4 believing in me – the text at the start of summer when she landed this plum position, two years before graduation. All she had done was introduce Amber to a friend in the art world and, before lightning could strike, there was Amber off to Hong Kong, in business class no less, bunking in her former home. Her daughter, June, the social science professor, is flummoxed. She has never been flown in business anywhere by her university. Millennials, her daughter says, they have it all.

Gazing at the wide expanse of the airport from her first-class seat – the upgrade arranged by her husband – she reflects, not for the first time, that perhaps she was too austere when raising June. Hong Kong still has everything to offer her granddaughter. June doesn’t think so. She and her husband emigrated to Canada when Amber was nine, returning only to visit. Amber Tam “loves” Hong Kong. The New Territories are her “favourite outdoors”, not the vast Canadian wilderness that intimidates her. She loves the convenience, the public transport, the buzz, all that easy nightlife, the food! Amber loves to eat, and it’s a pleasure feeding her. June and her husband, they can take or leave food, thrilled as they are by intellectual, not material, pursuits. June’s a filial daughter, worries after her mother even though she really doesn’t need to, especially not since her marriage five years earlier. At sixty-five, imagine! To a well-­heeled English sculptor ten years her junior with a home in London. Amber thinks Granny is “awesome”. June, she suspects, is still embarrassed.

At arrivals, her granddaughter flies at her in a shrieking embrace. Amber’s tall, and she’s shrunk. We look like Mutt and Jeff. And Amber says: Who?

He had been tall, a visiting professor at her university from Yale School of Art. Twenty years her senior, a distinguished historian of Chinese and Japanese art, paying her heed. To swoon or not? She swooned. Remembering him now, probably because of Amber, she wants to tell her granddaughter: you look quite a lot like him. Despite Amber’s Cantonese father and June, who looks almost all Chinese, virtually erasing the Caucasian blood, this DNA leapfrog gave Amber his cheekbones, his mouth, even that insistent stare that made his eyes glow. Thinking of him now, she is shocked at his callousness, even though, back then, she forgave, forgave, forgave him. Why? Because he made her laugh over Mutt and Jeff? Because he followed her to Kowloon City near the airport where no one would see them together? Because her friend Kam owned that great 唐樓, the entire three­-storey building, and lent them the top-floor flat for their trysts? Roaring jets punctuated their sex. Imagining him now, she is shocked at his jokey endearment – “cheap date” – because she didn’t crave fancy European restaurants, presenting him instead with the best local cuisine, inexpensive back then. Most of all, she is shocked at the cliché he was. My wife doesn’t understand, doesn’t appreciate local culture like me. I could live here forever with you. Marry me. Shocked she was so easily fooled. Family abandoned her. Friends turned their backs. And she? She left university to earn the daily rice bowl. What else could she do? June had no family, only discipline to excel in school, plus her meagre, exhausted maternal love.

In Amber’s text, three weeks earlier – Granny I’m in love – and during their FaceTime chat, the truth gushed forth. She can picture it all: her friend the Berlin art-gallery owner invites Amber to “the” party and she’s a star – super smart, fashionably attractive, sexual. Young. And Amber is in love, or thinks she is, with that brilliant and beautiful Jamaican installation artist visiting from London – have you heard of him Granny he’s really famous – who promises to take her to Seoul, Singapore, Paris, Barcelona, all those grand cities – he’ll introduce me around. She is already talking about taking time off from school – it’ll be soooo good for my career he loves Hong Kong wants to be here with me – on and on, gushing, swayed by Granny’s twilight romance. Knowing she has Granny’s flat, any time. Dismissing Granny’s warnings that the man’s too old, that he’s in love with her youth and rent­-free Hong Kong, that he’ll vanish when his yellow fever abates. That he lies to seduce, as her almost-­grandfather did. She is here, now, trying to shelter Amber from her own exuberant storm. She is here, now, waiting again for lightning to strike.

This piece is part of Culture Trip’s original fiction project on the theme of arrivals and departures in London, New York City and Hong Kong.