Wishing on a Tree: Where Hongkongers Go for Good Luck

Praying for good luck at the Lam Tsuen Wishing Trees is one of Hong Kong’s most charming and well-preserved traditions. During the first few days of the Lunar New Year, locals and tourists flock here to write down their wishes for the new year, before tying the paper to an orange and throwing it high up into the tree’s branches. Legend has it that if the orange successfully lodges in the tree’s branches without falling back to earth, the wish will come true.

In Chinese culture, praying for good luck, prosperity and success in the year to come is an important part of the Lunar New Year. Hongkongers seeking a little extra help are likely to make a trip to the famous Lam Tsuen Wishing Trees, located near a shrine in the small village of Fong Ma Po in the New Territories.

According to local superstition, the banyan trees of Lam Tsuen hold the magical ability to make wishes come true. In addition, the whole village is a carnival of activity during Chinese New Year, with festive decorations and Chinese folk performances on full display.

In 2005, a collapsing branch led to two injuries. Nowadays, throwing oranges at the original tree is discouraged for the safety of both the worshippers and the trees. Instead, replica trees and wooden racks are used, allowing the tradition to continue. 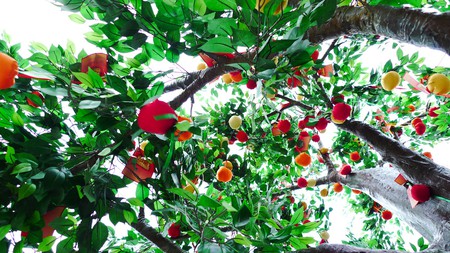 History and Legends Associated with the Wishing Tree

The village of Fong Ma Po in Tai Po district is over 700 years old. Its first settlers were simple fishermen. The village temple, named Tin Hau Temple after the Chinese goddess of the sea, was built in 1736 AD, during the reign of the Qianlong Emperor.

Originally, the Lam Tsuen Wishing Trees consisted of two giant trees. One stood at the village entrance, while another was located near Tin Hau Temple. Once a local had finished praying to Tin Hau, he would light incense at the smaller shrines set up for the folk deities Wang Ye and Pak Kung, which were positioned right next to the tree outside the temple.

It is said that, somehow, it became a ritual for worshippers to inscribe their name, birthdate, and prayer — an entreaty for a plentiful catch of fish, for instance — on a piece of colored joss paper and hang it from the tree. Over time, the trees acquired a mythic status among locals.

According to one legend, there was once a Tanka woman who fell mysteriously ill. In a dream, a deity came to her and told her to go to Lam Tsuen, where she needed to throw a piece of joss paper at a great tree as an offering to the gods. After the woman followed the instructions, she magically recovered. The story of this strange tale spread, drawing worshippers to Lam Tsuen.

Another story has it that there was a man who came to Tin Hau Temple pray for his son, who was struggling in his studies. After he prayed in front of the tree by the temple, his son’s academic performance improved spectacularly, and thus the legend of the Wishing Tree was born. 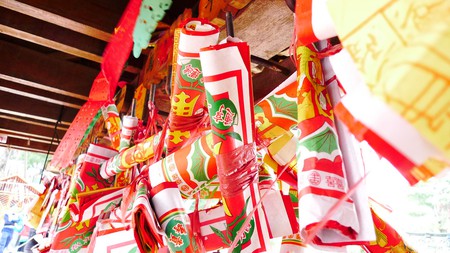 In 1998, the original Wishing Tree, a camphor tree that stood at the village entrance, accidentally caught fire and burned down. It was subsequently replaced by a Chinese banyan.

In 2005, a collapsed branch caused two serious injuries and prompted the authorities to intervene. After examining the Wishing Tree, they declared that the tree had become sick and fragile due to the excessive weight of the wishes. To protect the tree, its most damaged branches were pruned away, and throwing wishes at it was discouraged. Instead, wooden brackets and artificial wishing trees were installed nearby, allowing the tradition to continue. Plastic oranges are also used in place of rocks for fear of injuries.

In recent years, the Tai Po Council District has invested millions of dollars into building facilities for visitors, including a performance stage, carpark, toilets, and more. In 2011, a rectangular water channel named the “Wishing Well” was added. Hopefuls place their written wishes into a lotus-shaped lamp and place it into the water, letting it drift into the Lam Tsuen canal. 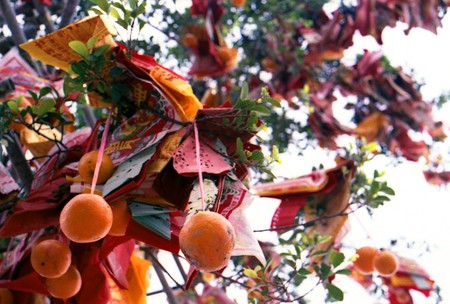 How To Make A Wish

The multicolored joss paper used to write wishes on is called po dip (寶碟), which comes with an attached string and plastic orange. You can either write down your wish, or alternatively, turn the paper over and put a checkmark next to a printed list of commonly wished-for things. The options cover professional and academic success, safe travels, prosperity, good health, and even world peace.

Once you’re done, roll up the po dip into a tight cylinder and tie off with the attached string. Then, throw it as high as you can in the tree. (Here’s little a trick: Let the plastic orange swing freely, and try to throw the po dip in such a way that the orange acts as a pendulum, launching the wish high into the air.)

It is believed that the higher it lands in the tree, the more likely the wish is to come true. It’s also said that if the orange falls to the ground, your wish was too greedy!