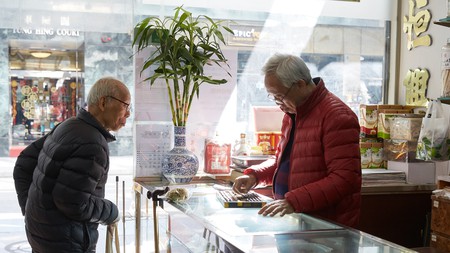 In Hong Kong, those with diabetes are prescribed corn husks, asthma sufferers are given soups made out of flying lizard, and arthritis is treated with the powdered cartilage of deer antlers. Traditional Chinese Medicine is a well-respected form of healthcare in east Asia, but to what extent is it effective? 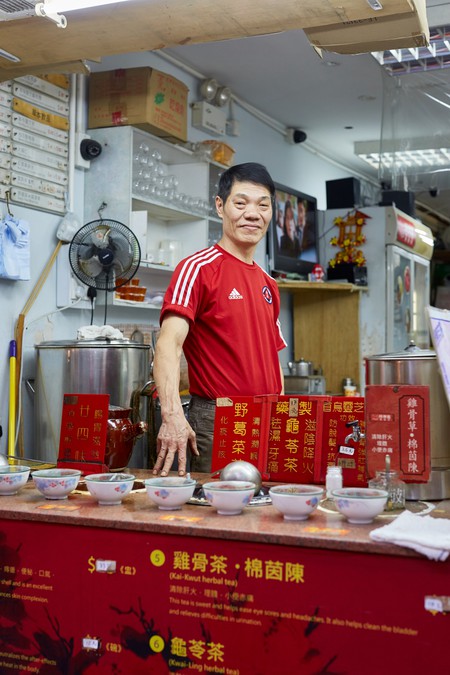 Standing outside a small store, a bespectacled man is quickly typing a message on his smartphone while smoking a cigarette. He asks the man behind the counter to recommend him a drink. Mr Lam, the shop owner, hands him a bowl of dark viscous liquid – a brew called 23-Flavour Herbal Tea – claiming it will cleanse his digestive system and neutralise the toxins from his cigarette. The smoker pays Mr Lam for his drink and gulps it down at the counter in much the same way one might knock back an espresso before heading to work.

Tung Lok Tong is tucked away on the busy thoroughfare of Queen’s Road, Central, near a McDonalds, a Western pharmacy and an Italian delicatessen. Sitting on the counter is a row of giant clay pots and steel tanks storing tea. Bowls of dark-coloured teas are on display, covered with strips of cellophane to ensure the liquids stay warm and uncontaminated. The energetic and cheerful 61-year-old Mr Lam mans the counter, asking customers about their health issues and recommending a tea which might help to treat them.

‘People in this city are often overworked, stressed, and don’t get enough sleep’, Lam explains. ‘This, combined with unhealthy habits like drinking and smoking, wreaks havoc on their bodies, so people get sick easily, and are often physically out of balance.’

Wendy Lo, a 28-year-old banker, swears by Mr Lam’s brews. She takes her drink inside the shop and sits down at one of the tables, where there are containers of salt and honey should customers want to ‘season’ their teas to lessen their often bitter taste. She’s hoping to stave off her cough and so has gone for a bowl of gan mao cha, which literally translates to flu tea. ‘These teas regulate our immune systems and helps to address the health problems you’re encountering’, Lo says. 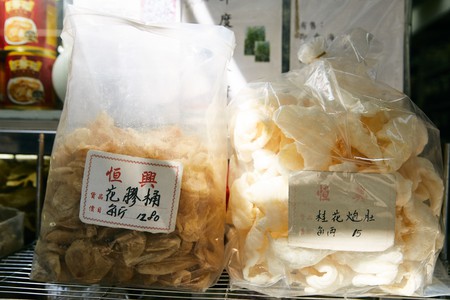 ‘When the body has too much yang qi, it becomes overheated, resulting in colds and flus’, Lam says. ‘Much like an overworked machine.’ The specific ingredients of gan mao cha vary slightly from one tea maker to the next and, of course, Lam has his own secret family recipe. The herbs used in his special formulation of gan mao cha are cooling, yin herbs which help to dispel excess heat, or yang. 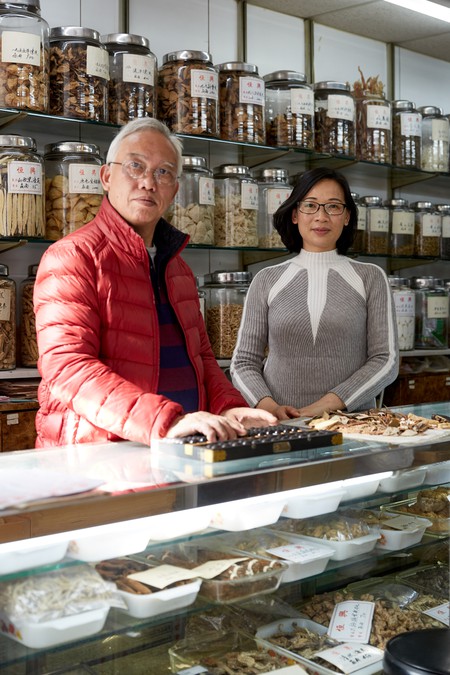 ‘Ilex root and evodia leaf clears heat, the Isatis roots removes toxins, the chrysanthemum flower clears the liver, cools the lungs and disperses wind’, Lam says. ‘These herbs work by lowering the body’s internal heat which help to address the symptoms of flu, like congestion or fever.’ While these herbs may seem strange and inaccessible to most of us, Hong Kong locals who have grown up with their grandmother’s TCM remedies know exactly where to find them.

Further west along Queen’s Road is Hang Hing Medicine, where owner Mr Chan Tat Wo is wrapping a package of fritillaria – a type of lily bulb – which a TCM physician has prescribed for a patient suffering a tenacious, phlegmy cough. Lining the walls all around him are rows upon rows of giant jars containing an assortment of dried barks, roots, leaves, flowers, seeds, and fruits.

Animals are also part of the TCM apothecary. Among the more menacing-looking ingredients is the tokay gecko. It’s used in traditional Chinese medicine to help with lung-related conditions such as asthma. One of the more costly treatments for asthmatics involves cordyceps, an ingredient that is worth its weight in gold. It’s is usually only found in the mountainous regions of Tibet and Nepal and is essentially a caterpillar parasite.

Some stores specialize in deer velvet – the powdered cartilage of first-growth deer antlers – which is used to treat arthritis and improve kidney function. More controversially, the ingredient has also been used by athletes to build muscle and boost endurance. Studies have shown that the cartilage contains hormones such as testosterone, androstenedione, and dehydroepiandrosterone, which have been known to increase physical strength.

In Hong Kong, more and more people are turning to TCM doctors. Business at Hang Hing Medicine is booming. Mr Chan believes this is in part a reaction to Western-trained doctors dispensing antibiotics too freely, causing patients more harm than good. ‘Western doctors heal quickly, but the results may not last for a long time, because the root cause of physical imbalance is not dealt with’, says Chan. 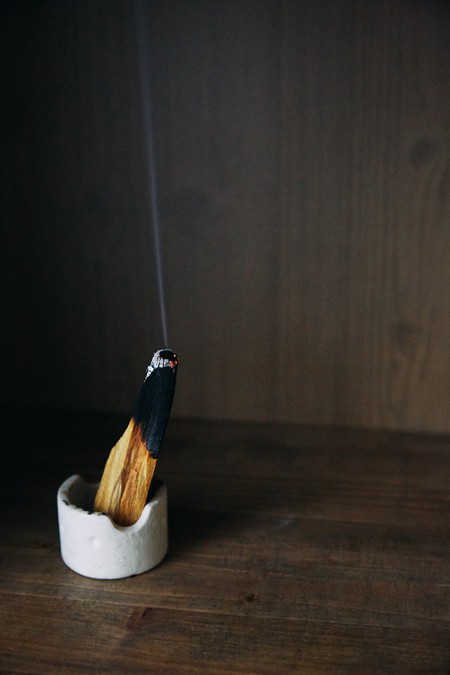 The role of belief

This preventive approach to health is perhaps one of the main differences between Western and Eastern medicine. TCM aims to address the root origins of illness, not just the symptoms. It requires time, commitment and, to a certain extent, belief that these treatments will eventually work. ‘It’s not just about giving the patient a one-time cure’, Chan says, ‘but about maintaining health and restoring balance in the body.’

TCM is all about knowing what you can do to become less susceptible to diseases. It’s a belief that many Hong Kongers subscribe to, and one that makes a very profitable business model for stores like Hang Hing Medicine and Tung Lok Tong. There’s no such thing as a quick fix in TCM. It’s a practice; one that requires a lot of repeat visits. Yet despite the cost, time and effort, its popularity shows no signs of slowing down.

At alternative healthcare clinic Balance Health, Clara Chan treats elderly cancer patients using complementary TCM treatments. Before, during and after chemotherapy, her treatments are intended to boost the immune system and, through nutritional therapies, to maintain a healthy white blood cell count. She treats a generation who perhaps once relied solely on herbal teas and other TCM treatments for most, if not all, their health problems. 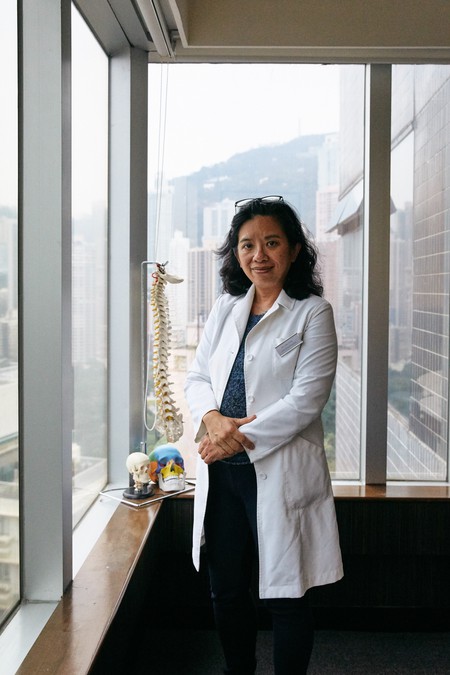 It’s not impossible that placebo is the missing piece of the puzzle, that TCM works to the extent that people believe in its powers. In Hong Kong, many parents and grandparents use traditional remedies to take care of their kids when they get ill, and this gets passed on from one generation to the next. This attitude of rebalancing qi is embedded in Hong Kong’s cultural fabric, from the way people cook with a balance of yin and yang ingredients to the habit of going to medicinal tea shops in the morning before work.

But could placebo have managed to dupe generations for 2,500 years? Unlikely, according to Ms Chan, noting that TCM has gone through centuries of trial and error. ‘Chinese culture is very direct’, she says. ‘If something works, people will continue using it. If it doesn’t, I’m sure it wouldn’t have been used for as long as it has.’ 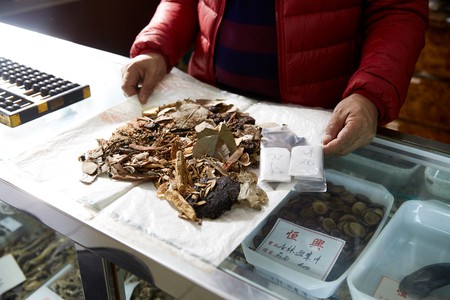