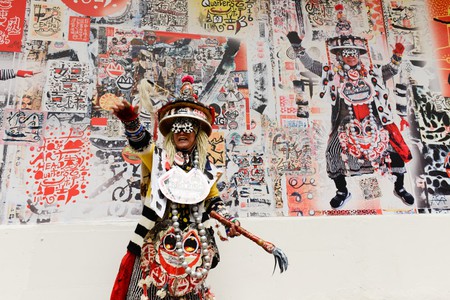 A performance artist with a penchant for frogs and wearing wacky outfits has been one of the pioneers of contemporary art in Hong Kong since the late 1960s.

If you’ve ever wondered who the world’s biggest fan of frogs was, then he may well take the form of Hong Kong’s ‘Frog King’. Described as ‘a living work of art’ and ‘an eccentric force of nature’, Kwok Mang Ho, otherwise known as, Frog King, has taken the frog theme in his artwork to new levels. 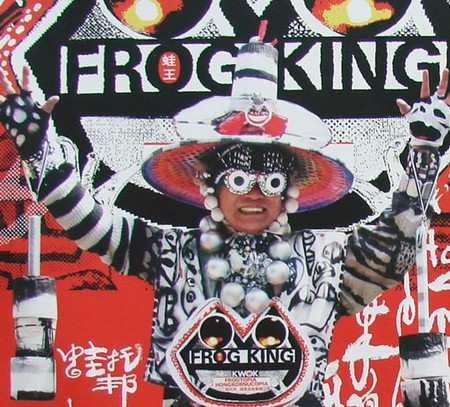 Originally trained in ink painting and calligraphy, Frog King has been a pioneer of unconventional arts in Hong Kong since the late 1960s. To date, he has won multiple arts awards and produced numerous performances, sculptures, paintings and installations in over 3,000 art events all over the world.

He is one of the earliest Chinese contemporary artists to explore the use of ink painting as a conceptual tool, incorporating it into multiple media installations and performances.

Over the years he has included frog-related symbols in much of his work, earning him the “Frog King” moniker. His personal identification with frogs is said to have started when he was younger and when he used to enjoy climbing up a big rock called “Big Froggy Rock” in Hong Kong’s Happy Valley. He later referred to himself as the “Frog Prince” when approaching girls.

Kwok sees frogs as amphibians that are capable of living vividly either in water or on land and exploring the two different worlds freely. He identifies with this flexibility and when he lived abroad for a while in New York, his frog symbolism represented a bridge between East and West and the amphibious idea of being able to sail between cultures.

Frog King’s distinctive style of dress has also become a trademark of his work. His elaborate and colourful costumes have been described as “wearable sculpture”.

His Froggy Sunglasses Project became one of his most recognised pieces, in which members of the public were encouraged to wear a pair of sunglasses designed in the style of frog’s eyes for a series of photographs.

His creations take the form of “Frogtopia”, and usually consist of numerous colourful mixed-media installations and graffiti of his signatured frog icon. 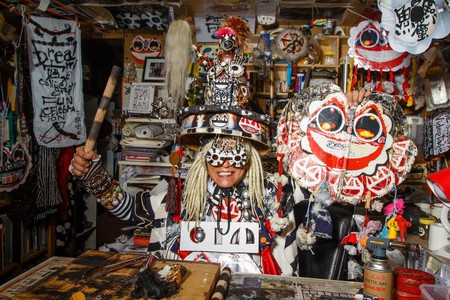 In 2001, he started his own “Frog King Kwok Museum”. Today his work is represented by 10 Chancery Lane Gallery in Hong Kong. To celebrate his 70th birthday the gallery hosted a three-month exhibition that highlighted the many ways in which Frog King has developed his ink practice over the last 50 years, having started in 1967.

For Art Basel 2018 in Hong Kong at the end of March, the gallery is going to showcase Kwok’s calligraphy and people will be able to take part in the Froggy Sunglasses Project.