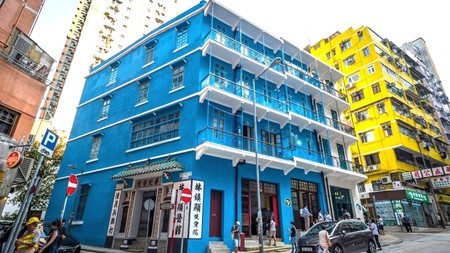 If you’re strolling around Hong Kong’s Wan Chai area you might be drawn to an eye-catching cluster of brightly coloured buildings, among them the Blue House. Aside from being a stark shade of blue, the building has become a significant historic landmark in the city’s most colourful street.

Hong Kong is not always the best at preserving its heritage. A densely packed city that is known for having the most expensive and competitive property market in the world is no stranger to demolishing the old to make way for the new.

However, one historic cluster of buildings known for their bright colours have stood the test of time. Located on Stone Nullah Lane in the city’s Wan Chai area, you can’t miss the Blue House – it’s a four-storey tenement building that was built in the 1920s with a mixture of Chinese and Western architectural features. It was named after its brilliant blue exterior. 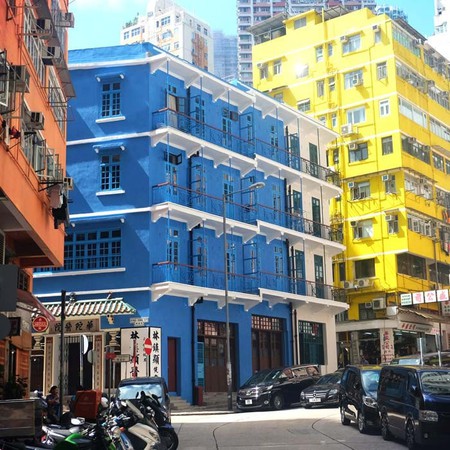 Now a grade one historic building, the Blue House is one of the few remaining examples of a tong lau: a style of residential building notable for balconies that were built in the late 19th century in Hong Kong and southern China.

Most recently, the Blue House was given the Award of Excellence – the highest level in four categories – by UNESCO at its Asia-Pacific Awards for Cultural Heritage Conservation. The building has come to symbolise a relatively rare urban conservation success story.

Aside from being a well-preserved piece of Hong Kong’s architecture, the Blue House consists of three interconnected buildings: Blue House, Yellow House and Orange House.

Both the Blue House and Yellow House have become something of a living museum. They are home to the ‘Hong Kong House of Stories‘, which hosts events and exhibitions that touch upon various aspects of Hong Kong’s history and development.

The Orange House is primarily a residential building featuring 20 residential flats. Collectively, the colourful cluster of buildings is also home to a community service centre and two restaurants run by social enterprises.