Top 10 Things To See And Do In Sheung Wan, Hong Kong 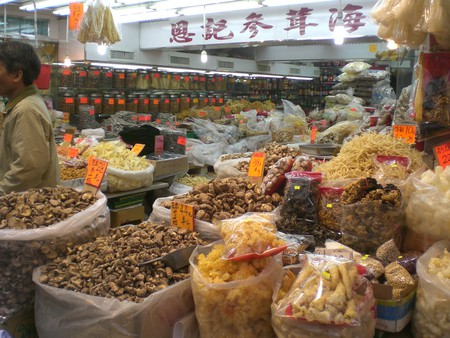 Whenever tour guide books introduce Hong Kong, they often only mention Tsim Sha Tsui, Causeway Bay, and Mong Kok where you can go sight seeing, shopping and satisfy your taste buds. Have you ever thought to go deeper into the history of the vibrant city? Just a 23-minute walk away from the financial hub, Sheung Wan is a world of wonder where the modern metropolis complement the colourful age-old traditions perfectly. Below are recommendations of the 10 best things you can do and see in Sheung Wan. 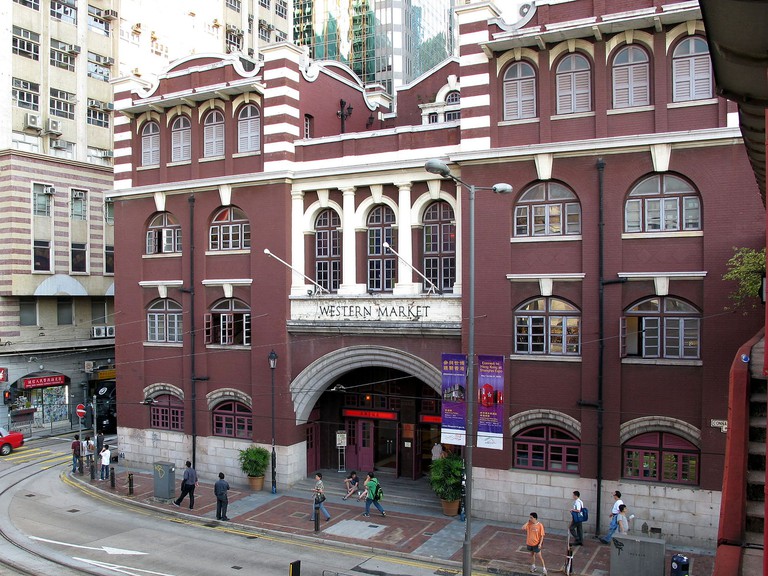 Western Market, Hong Kong | © WiNG / Wiki Commons
The four-story building was built in 1906 and is the oldest surviving market building in the city. It literally means ‘market’, though it doesn’t have many things to buy. However, it’s a good place to take pictures and you will be surprised how much Hong Kong architectures were heavily influenced by the British. The all-red building stands out from the Chinese streets with its Edwardian-style architecture that was popular in England from 1901 to 1918. Even inside, you will see colonial features, including vaulted ceilings and an English telephone phone booth.
Opening hours: Mon- Sun, 10 am – 12 am
Open In Google Maps
Western Market, 323 Des Voeux Road Central, Sheung Wan, Hong Kong Island, Hong Kong
Give us feedback

Walk along Wing Lok Street and Bonham Strand and you will find them lined with specialty shops selling rare and expensive dried seafood. The streets will be more lively and crowded during Chinese New Year because households scramble for dried seafood like black moss, dried snakeskin, dried sausage, and dried scallops for preparing a festive banquet. These are good areas to learn about Chinese-traditional eating habits. Keep in mind that most of these shops will be closed on Sundays and public holidays. 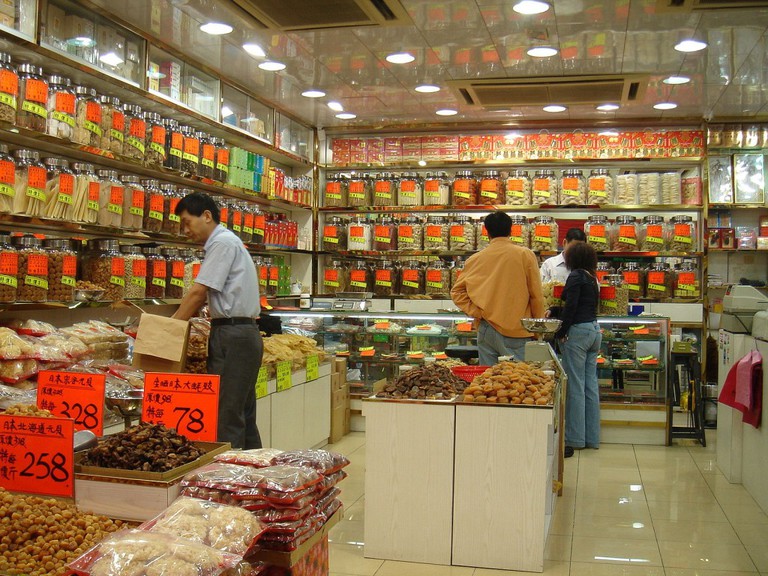 © mailer_diablo / Wiki Commons
Stroll down Ko Shing Street, also referred to Medicine Street, via Bonham Strand from Wing Lok Street, and you will see it packed with traditional Chinese medicine shops and dispensaries, which are much different than the ones in the West. Ko Shing Street is the heart of the wholesale Chinese herbal medicine trade in Hong Kong, where you can easily spot popular tonics like ginseng, bird’s nest products, and controversial shark fins. You can occasionally see shopkeepers in the age bracket of 60 years old and over swiftly working their fingers across abacuses to count the transaction amounts.
Open In Google Maps
Hong Kong, Hong Kong
Give us feedback

Hollywood Road (AKA Antique Street) and Upper Lascar Row (AKA Cat Street) are best-known for their curio and antiques shops selling inexpensive pottery, jewellery, ornaments, coins, and carvings. These streets are of great fun to haggle and hunt for old trinkets. Buyers are able to deliver their goods outside of Hong Kong with the assistance of sellers. 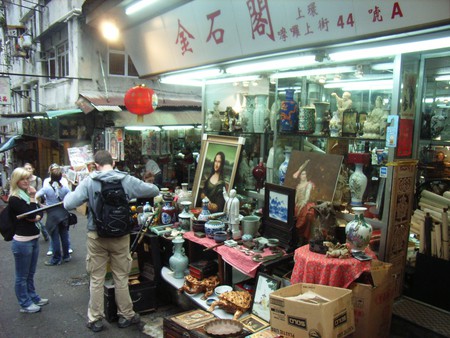 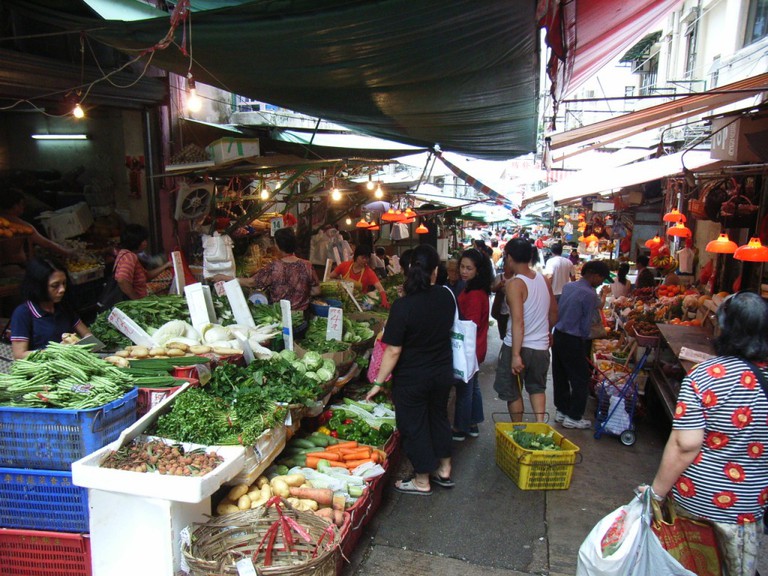 Graham Street Market, Hong Kong | © TangHon / Wiki Commons
Graham Street Market is one of the oldest continuously operating street markets in Hong Kong. The street is narrow but you can still find varieties of fresh fruits and vegetables, meats and seafood stalls as well as a deli line on both sides of the lane. It is so famous that it was featured in a scene from the 2001 film Rush Hour 2.
Open In Google Maps
14 Gage Street, Central, Hong Kong Island, Hong Kong
Give us feedback 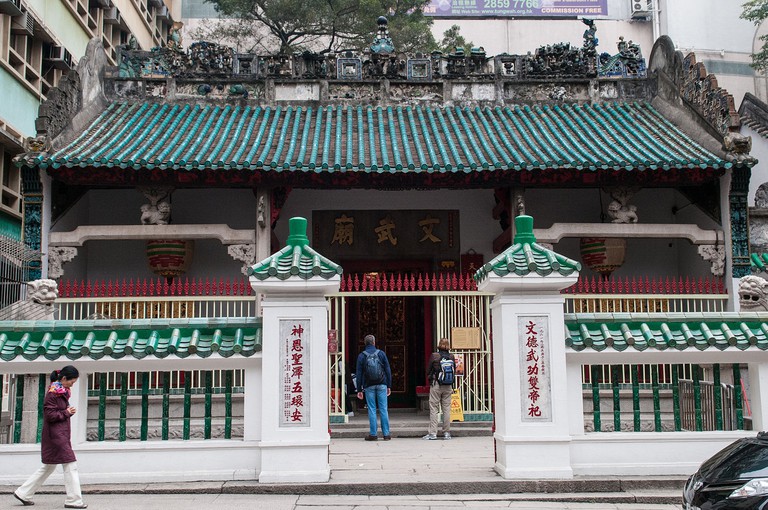 Man Mo Temple, Hong Kong | © Michal Osmenda / Wiki Commons
Situated at Hollywood Road, Man Mo Temple is one of the oldest temples in the city and it was mainly built to pay homage to the Taoist God of Literature (Man) and God of War (Mo), but still houses statues of Pau Kung, God of Justice, and Shing Wong, God of the City. A bronze bell dating back to 1847 was one of the historical relics in the temple and was preserved as a Declared Monument. When you enter into the temple, you will see incense coils, traditional wooden furnitures, colourful statues, and altars against the backdrop of the razzle-dazzle city.
Opening hours: Mon – Sun, 8 am – 6 pm
Open In Google Maps
Man Mo Temple Hollywood Road, Sheung Wan, Hong Kong Island, Hong Kong
+85225400350
Visit Website
Give us feedback 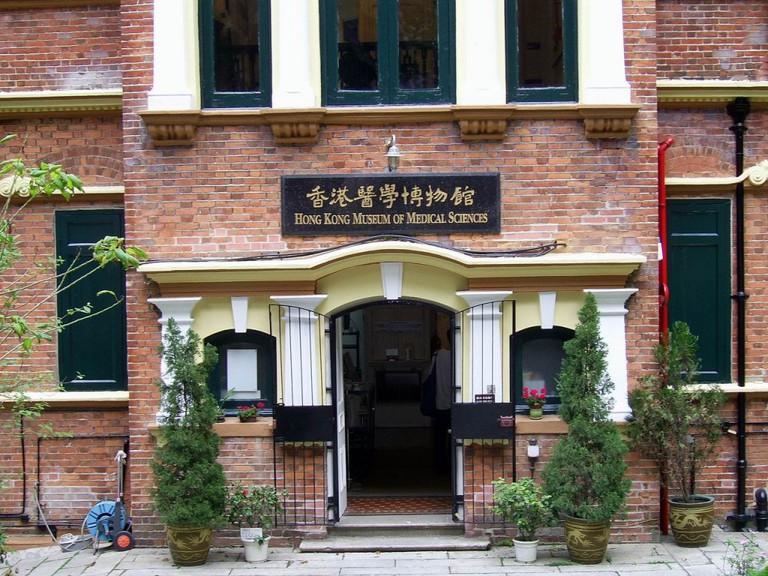 Hong Kong Museum of Medical Sciences, Hong Kong | © Chong Fat / Wiki Commons
The renovated three-story Edwardian-style building was established in 1996 and details the medical history of Hong Kong, from the 1894 bubonic plague epidemic to the 2003 SARS outbreak. There are only a handful of rooms, but they contain lots of real items that were great to see. The museum is a treasure trove of old photographs, medical equipments, and medical documents from the yesteryear of Hong Kong.
Opening hours: Tues-Sun, 1 pm -5 pm
Open In Google Maps
2 Caine Lane, Sheung Wan, Hong Kong Island, Hong Kong
+85225495123
Visit Website
Give us feedback

If you are interested in learning about Hong Kong history, you shouldn’t miss out on the greatest man in Chinese history – the founding father of Republic of China, Sun Yat-sen. Hong Kong was the cradle of his revolutionary thoughts and uprising plans and he studied and was baptised in the city as well. Follow the Yat-sen Historical Trail, which was set up in 1996 by the Central and Western District Council, and you can trace the life of Sun Yat-sen and other revolutionaries in the late Qing era. 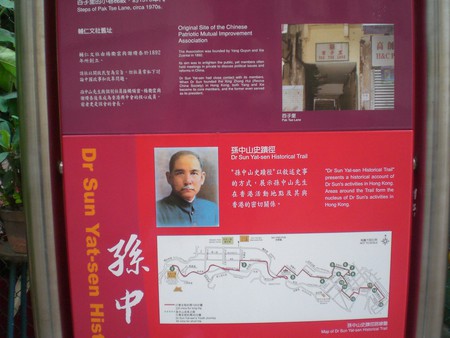 Hong Kong Tramways – affectionately called ‘ding ding’ by locals because of its bell sound mimicry for embarkation – are not precisely a Sheung Wan feature but are the best way to slow down the pace of life and sightsee. You can catch any Westbound tram heading towards Kennedy Town from Central or any stop with a fare costing only a few dollars for an adult. You will see dried seafood stalls and Chinese medicinal shops as well as traditional neon signs along the street. 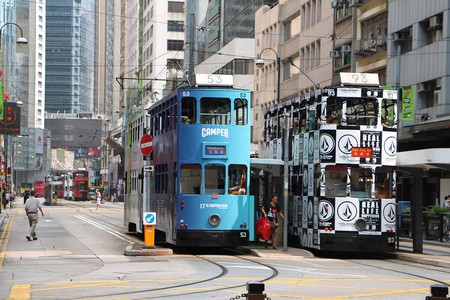 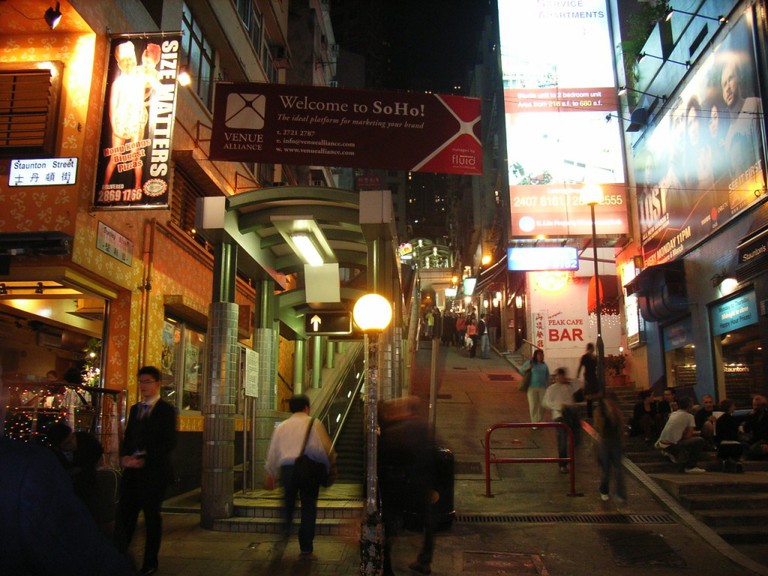 © Wiki Commons
The SoHo district is an entertainment zone located in central Hong Kong that borders Sheung Wan. The best feature is the escalator system, which was once ranked the longest escalator system in the world. The area consists of restaurants, bars, nightclubs, art galleries, and antique stores of Staunton Street and Elgin Street. It is also home to the first full-time comedy club in Asia – The TakeOut Comedy Club Hong Kong. The name is derived from its location: south of Hollywood Road.
Open In Google Maps
Hong Kong, Hong Kong
Give us feedback
Give us feedback