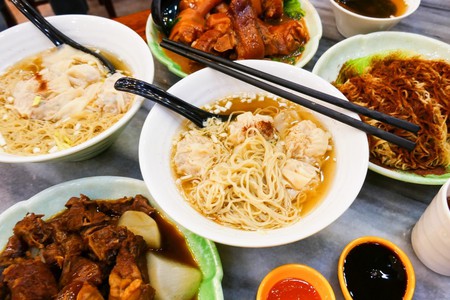 Jook Sing Mian aka ‘Bamboo Rod Noodles’ is a dying Cantonese art of noodle making. The name is due to the chef traditionally riding a bamboo log, bouncing up and down as if on a see-saw, to press the ingredients together. There are only a few remaining restaurants in Hong Kong which utilize the ancient craft.

Sadly, cooking jook sing noodles or “bamboo noodles” as they’re nicknamed, has become a dying art, rendering them one of the rarest types of noodles in China.

Jook Sing Mian (竹昇麵) or ‘Bamboo Rod Noodles’ as they are commonly referred to, are made by the chef riding a bamboo log, like a see-saw, in order to press the duck eggs, flour and other ingredients together. 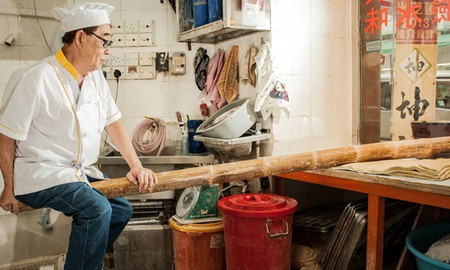 Mr. Lee, proprietor of Kwan Kee in Cheung Sha Wan, is one of the last remaining locals in Hong Kong that keeps the age-old art of jook sing “bamboo” noodle-making alive. Photo: Courtesy of Kwan Kee.

The application of machinery has nearly made this technique disappear, with only a few restaurants in Hong Kong and China’s Guangdong province still making the noodles in the traditional manner.

The bamboo-beating, is said to give a superior “elastic band” bounce to the noodles. It can take almost two hours to make a batch of noodles into just over 100 portions.

Much like how pasta is made, the chef starts by creating a well with flour and then brings out a tray of duck eggs and begins cracking them. He adds a few at a time, breaking them with his fingers and mixing them in with the flour. 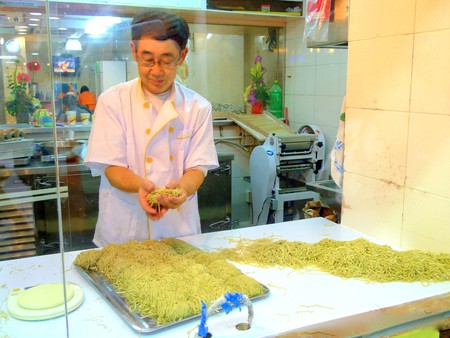 Around 50 eggs are used in the process; two-thirds are duck eggs to give the noodles flavour and colour, then the rest are chicken eggs. No water is used, just a bit of oil.

When the eggs are all mixed into the flour and the dough is the right consistency, this is where the fun part begins.

The dough is removed from the tray and a bamboo pole is put in place with a loop on the wall. The chef sits on the other end of the pole, bouncing up and down on the pole to flatten the dough.

The trick is to leverage the weight to knead the dough. It’s believed that using the bamboo pole in this manner is the secret to making a thin bed of perfectly pressed dough. 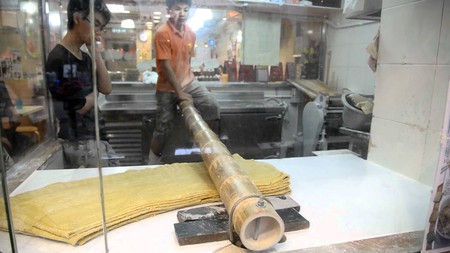 Following the see-saw ride on the bamboo pole, the dough is then placed in machines to thin it out further and cut it into fine noodles. Mr. Lee, proprietor of Kwan Kee in Cheung Sha Wan, is one of the last remaining locals in Hong Kong that keeps the age-old art of jook sing “bamboo” noodle-making alive.

In 2013, a CCTV documentary called A Bite of China featured Kwan Kee, sparking widespread interest in the restaurant and leading to long lines of customers wanting to get in.

Recently Mr. Lee has started teaching his younger sons the craft of making the noodles and has made a showcase out of it at his small restaurant in Cheung Sha Wan. Give him the dough and he will give you a show. You can eat it when it’s finished too.

Today, very few restaurants that make the noodles in this traditional manner remain. One of the noodle’s most popular combinations in a dish is jook-sing wonton noodles.

Where to try jook sing “bamboo” noodles in Hong Kong