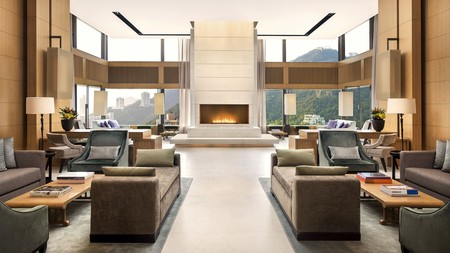 Hong Kong, a world centre for both business and design, is an innovator in luxury hospitality. The skyline of this towering city is best enjoyed from a swanky room at the top. From Michelin stars and bathtubs with views to cocktail bars and rooftop pools, these knockout five-star hotels truly deliver the high life – book your Hong Kong stay with Culture Trip. 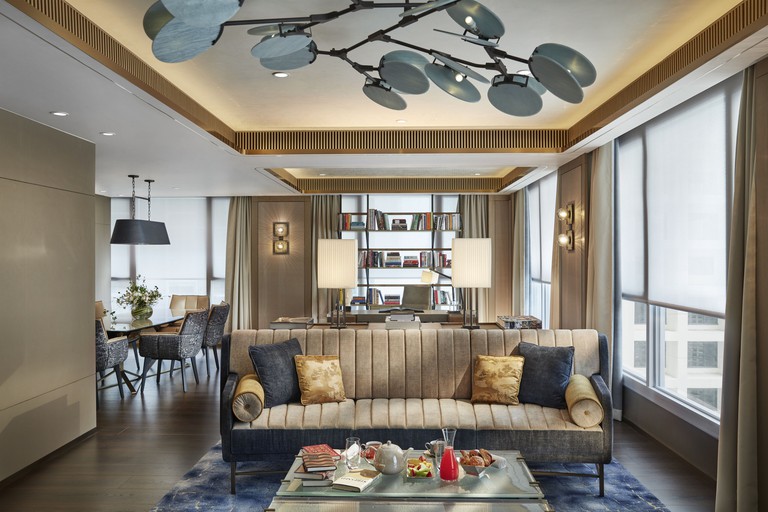 Courtesy of The Landmark Mandarin Oriental / Expedia
The little sister of the Mandarin Oriental, the Landmark pulls out all the stops for its place as one of the most exclusive hotels in the world. Extravagant design, including a multi-storey chandelier at the centre of a winding staircase, is met with modern details, such as in-room iPads and a heavenly fragrance trickling through the air conditioning. From sushi to a speakeasy, the hotel has enough bars and restaurants to keep you there your entire holiday. 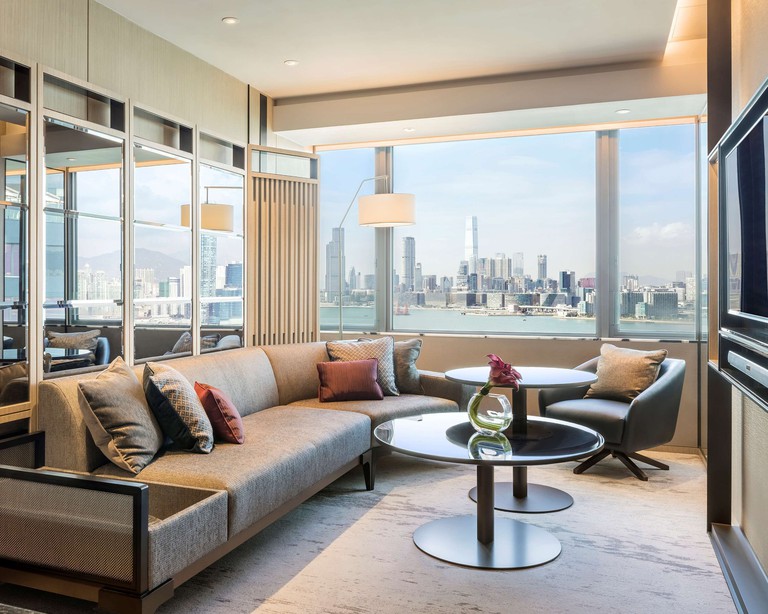 Courtesy of Hyatt Centric Victoria Harbour / Expedia
The hotel basks in views of Victoria Harbour and east Kowloon, but the best place to enjoy them is from the marble-panelled bathtubs of the sleek deluxe harbour-view rooms. Spend an afternoon at the 23rd-floor pool before grazing on pan-Asian food at the rooftop restaurant. For more local flavour, head to the street-food centre opposite the Hyatt. 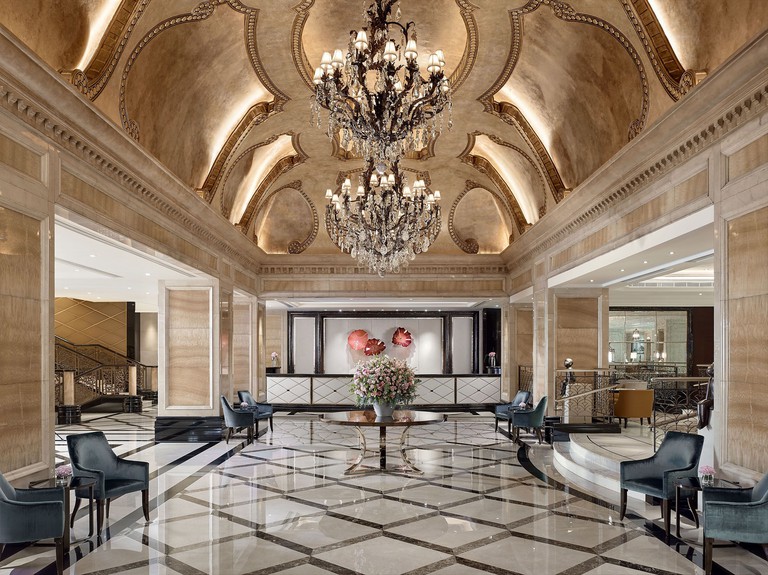 Courtesy of The Langham / Expedia
Two bygone eras meet at the Langham, inspired by the Victorian grandeur of its London counterpart and the opulent Chinese Tang dynasty. The jewel in the crown is the world-renowned Cantonese restaurant, three-Michelin-starred T’ang Court, set in a lavish red room. Cream columns give a palatial feel to the rooftop pool, and, on every floor, Service Stylists (personal butlers) glide among the rooms. Upgrade to a city-view room for a view of the bright lights of Kowloon. 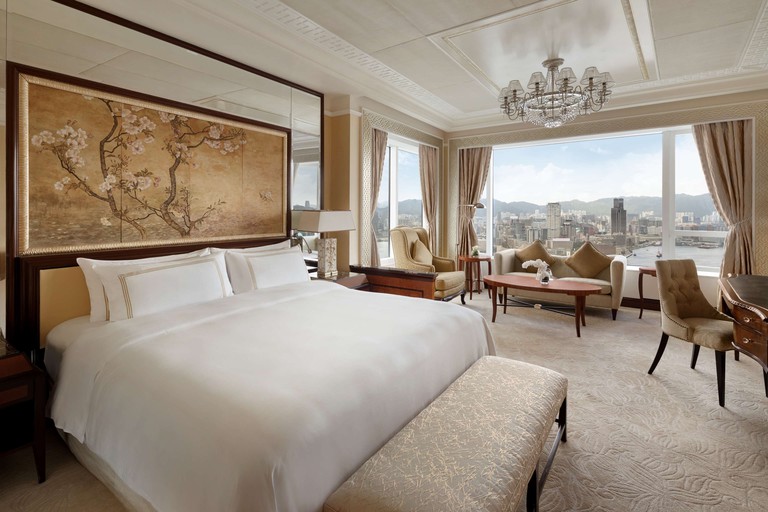 Courtesy of Island Shangri-La / Expedia
Island Shangri-La operates on a grand scale, with 719 paintings, eight restaurants (including one Michelin-starred), a 140-year-old banyan tree and, in the atrium, a 16-storey landscape silk painting deemed the largest in the world. Horizon Club rooms, on the highest floors, come with access to a lofty lounge on the 56th floor, open until 11pm and serving free cocktails and canapes. 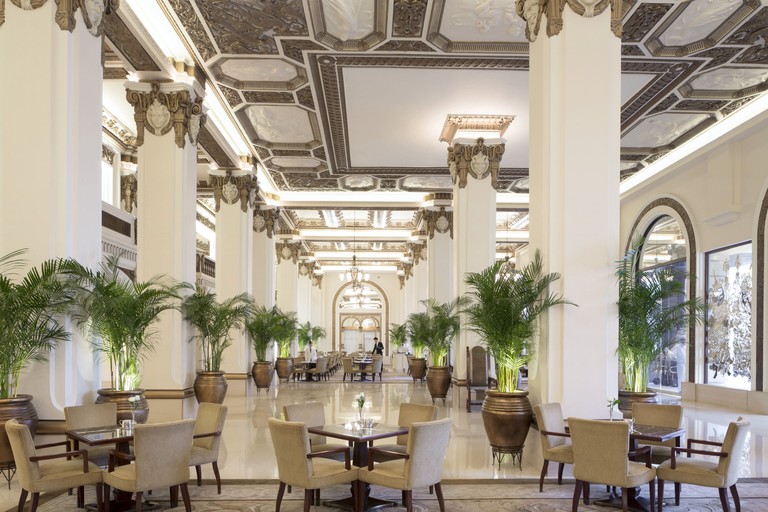 They don’t call it the Grande Dame of the Far East for nothing. The Peninsula is one of the most iconic five-star luxury hotels in Hong Kong, if not Asia. It opened in 1928, when the city was still a British colony, and has evolved to represent the best of East-meets-West hospitality. Expect old-school elegance and impeccable service; it’s luxurious but not snobby. Located in the heart of Tsim Sha Tsui, the hotel is on the doorstep of major attractions, and rooms offer sweeping Victoria Harbour views. Book one of the green Rolls-Royces for an elegant ride around the city. Afternoon tea here has become a local institution – a great excuse to visit and soak in the atmosphere, even if you’re not planning to stay. 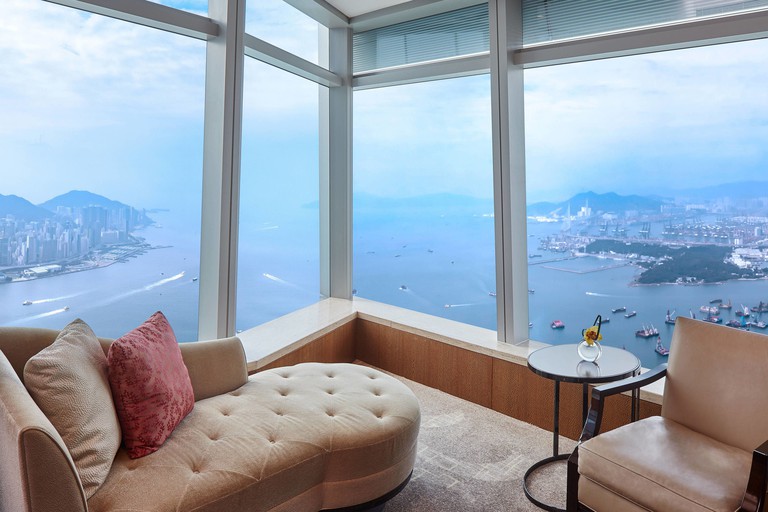 Luxury is literally taken to new heights at the Ritz-Carlton. Occupying the 102nd to 118th floors of the tallest building in Hong Kong, it takes the honour of the highest hotel in the world. Add to that the highest bar in the world, Ozone, located on the 118th floor, and you’ve got the quintessential “high-life” experience. Michelin-starred restaurants, rooms with spectacular views and five-star Ritz-Carlton hospitality complete the elevated luxury experience. 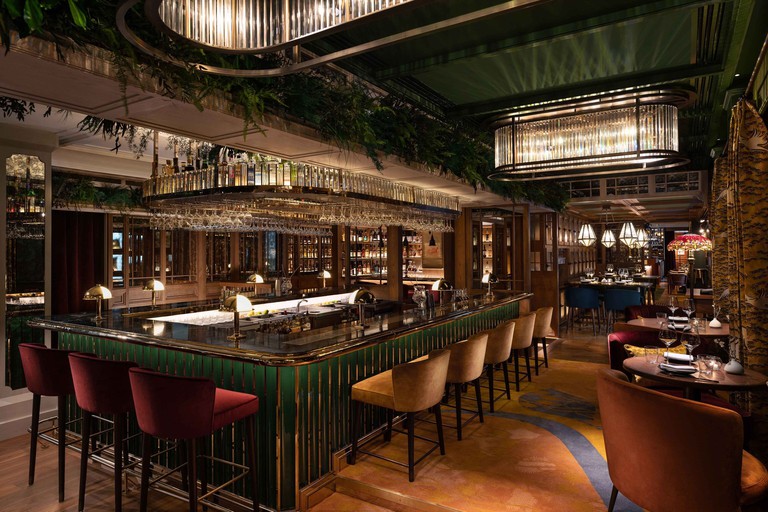 Mandarin Oriental is known internationally as a world leader in luxury hospitality, but it’s this Hong Kong outpost where the brand’s journey first began. The original still dazzles, with 501 rooms and suites offering magnificent harbour or city views – although the pull of the nine eateries (two of which are Michelin-starred) and the award-winning spa may mean you don’t spend much time in them. 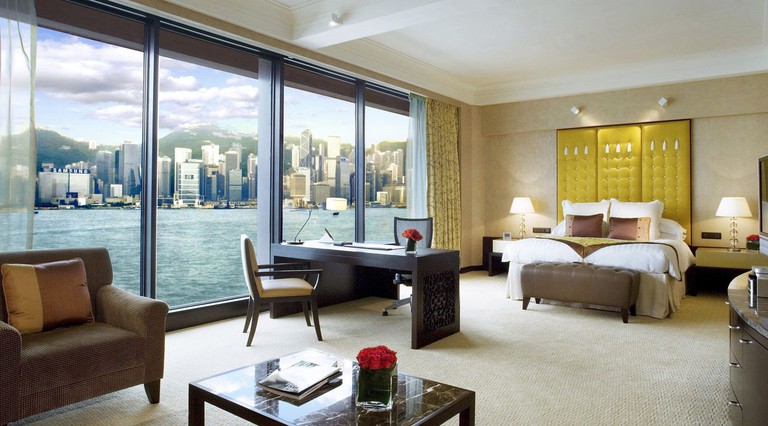 Located on the Kowloon waterfront, InterContinental Hong Kong overlooks Victoria Harbour. The lobby lounge, with floor-to-ceiling windows, is the best place for a drink or bite while you admire the views, especially at night, when the city is illuminated. For the ultimate in luxury, the presidential suite is the largest in the city, with a rooftop infinity pool and a Jacuzzi. Restaurants include the Michelin-starred Yan Toh Heen. 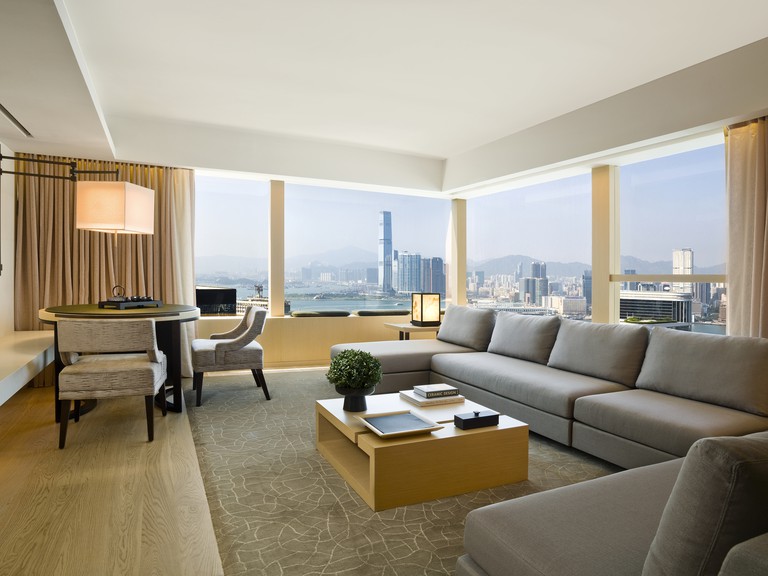 Courtesy of The Upper House

This luxury boutique hotel in the heart of Hong Kong Island has some of the most spacious rooms in the city. Standard rooms start at 68sqm (730sqft), with island and harbour views, while the 114sqm (1,227sqft) suites feature expansive harbour vistas. The gorgeous bathrooms also feature large standalone limestone-clad baths. The in-house restaurant, Cafe Gray Deluxe, serves modern European cuisine and offers one of the best afternoon-tea experiences in town. As the hotel is centrally located, there’s a slew of restaurants and attractions on your doorstep. Popular dining and nightlife spots Lan Kwai Fong and SoHo are only one Metro stop away. 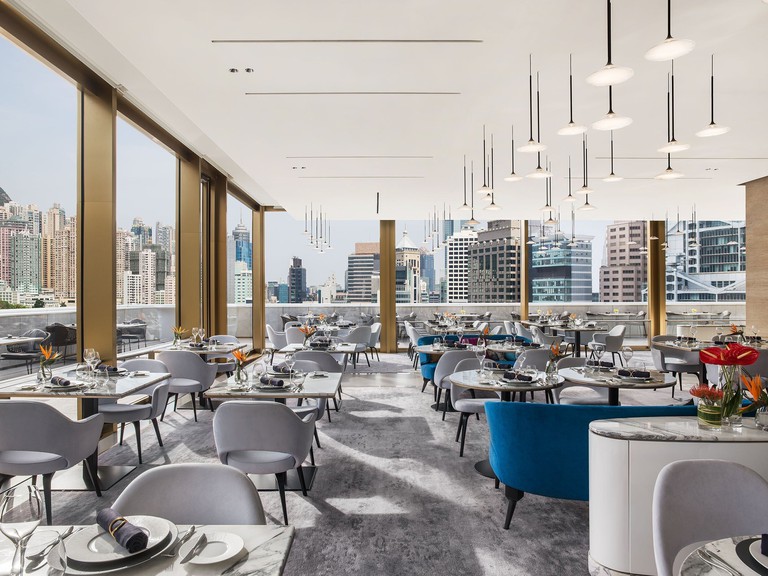 Courtesy of The Murray / Expedia

Housed in what was a prominent government building in the 1960s, The Murray has been redesigned into one of the best-looking hotels in the city. The spacious 336 suites and rooms are decked in warm contemporary tones and peppered with state-of-the-art tech. The five-star hotel is also home to first-class dining options, including the trendy rooftop restaurant and bar, Popinjays. 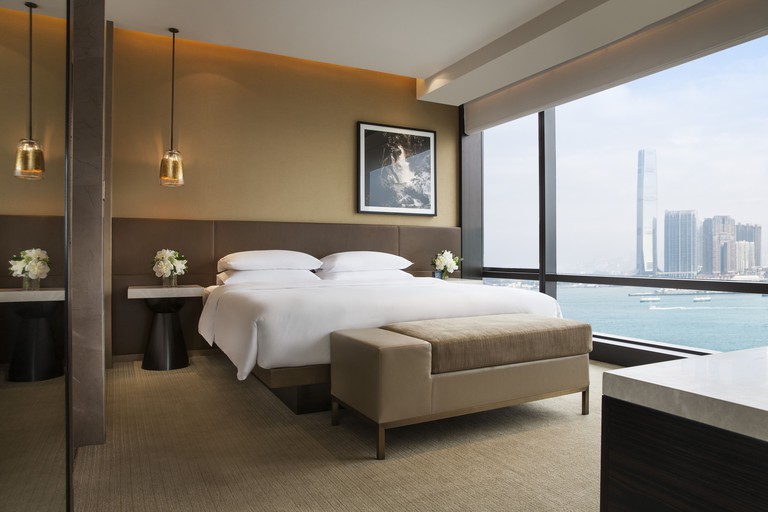 When international dignitaries, heads of state and celebrities come to town, many head to the Grand Hyatt on Hong Kong Island’s waterfront. The 545 spacious rooms and suites offer commanding views of the Hong Kong skyline and Victoria Harbour. There are also two presidential suites (among the largest in the city), 10 restaurants and bars, a luxury spa and 22 event venues. 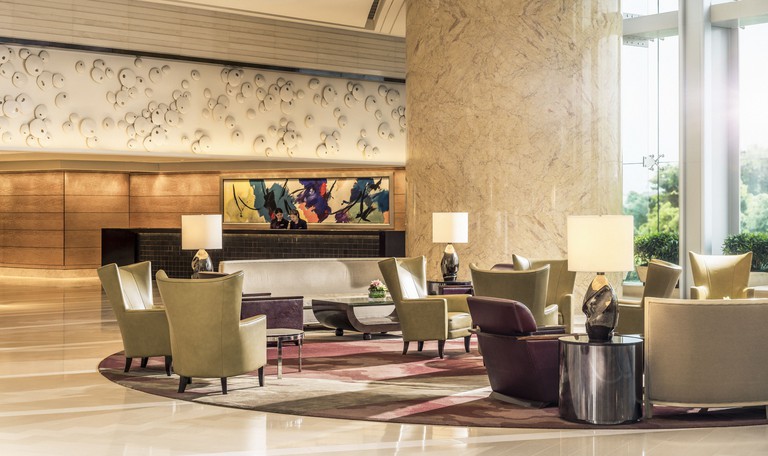 If you’re a fan of fine dining, you’ve come to the right place. This Four Seasons is home to two three-Michelin-starred restaurants: French eatery Caprice and Lung King – the first Chinese restaurant in the world to earn three Michelin stars. The four outdoor pools are also among the best in the city. The lap pool, whirlpool and plunge pool are great, but the star is the sixth-floor infinity pool with underwater speakers which appears to spill into Victoria Harbour. Generously sized rooms and suites offer some of the best harbour views in the city, and the convenient location offers a direct link to the IFC shopping mall, Metro and airport express service.