The Best Hong Kong Egg Waffles And Where To Find Them 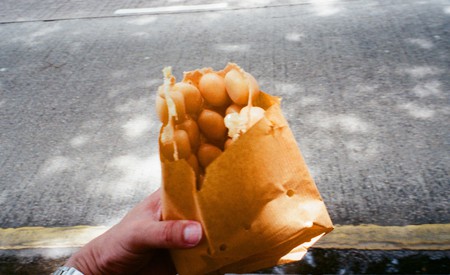 The egg waffle, one of Hong Kong’s most iconic and well-loved street snacks, is a quintessentially Hong Kong food to try. These fluffy, golden cakes can be found all over the city. Some vendors opt for a no-nonsense, classic egg waffle while others serve the snack with an innovative modern twist. We’ve rounded up the six best places to hit up for egg waffles in Hong Kong.

Snack Bar, Chinese
Facebook
Email
Twitter
Pinterest
Copy link
Share
Map View
This joint gets long queues and rave reviews for a reason, Master Low-Key’s crispy, heavenly egg waffles are richly flavored and so aromatic that you’ll smell them before you see them. It’s one of the few egg waffle vendors to have to use a ticket number system to manage the traffic.
Open In Google Maps
B3號舖地下, 廣信樓 東大街, 筲箕灣, 香港島, Hong Kong
+85255924100
Visit Website
Give us feedback

Oddies pairs traditional Hong Kong egg waffles with Italian gelato, which turns out to be a match made in heaven. Their signature bestseller is the Night Wolf, which contains a chocolate-chip flavored egg waffle in a cup containing 66% dark chocolate, banana ice cream and passion fruit panna cotta. Expect a long queue!