The 10 Best Hong Kong Artists and Where To Find Them 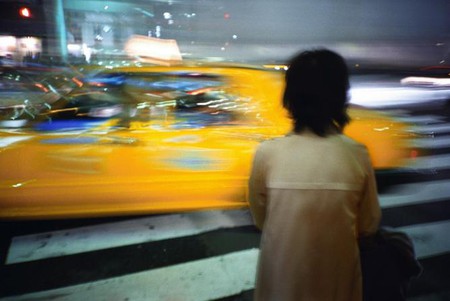 Art Gallery
Facebook
Email
Twitter
Pinterest
Copy link
Share
Map View
Born in 1973 in Hong Kong, but raised in America, Paul Chan is an artist, writer and publisher. His artworks consist of video installations, projections and animations, showcasing a wide variety of multimedia influences, as well as literary and philosophical influences. His works are said to be inspired by Samuel Beckett, Theodor Adorno and Henry Darger. In more recent years, Paul Chan’s work has become more political in its subject matter. Themes of geopolitics, war and violence saturate his works, providing a critical commentary on the world today. His works have been exhibited globally, in locations such as The Serpentine Gallery in London and The Museum of Modern Art in New York, and he has represented Hong Kong at the Venice Biennale and Documenta. During a hiatus from art-making, Paul Chan founded Badlands Unlimited in 2010, an art and ebook publishing company, which is based in New York. Notable works by Paul Chan include his 18 minute animation Happiness (Finally) After 35,000 Years of Civilization from 2002, which was the first work by Chan to be shown in a gallery (the Greene Naftali Gallery), and his 7 Lights projected animation series, which he began in 2005, and debuted in 2007 in the Serpentine Gallery. More recently, Chan embarked on a six-month long exhibition of his work in Schaulager, Basel. He has received a number of awards, including the Hugo Boss Prize in 2014.
Open In Google Maps
508 West 26th Street, Manhattan New York, New York, 10001, USA
+12124637770
Visit Website
Give us feedback 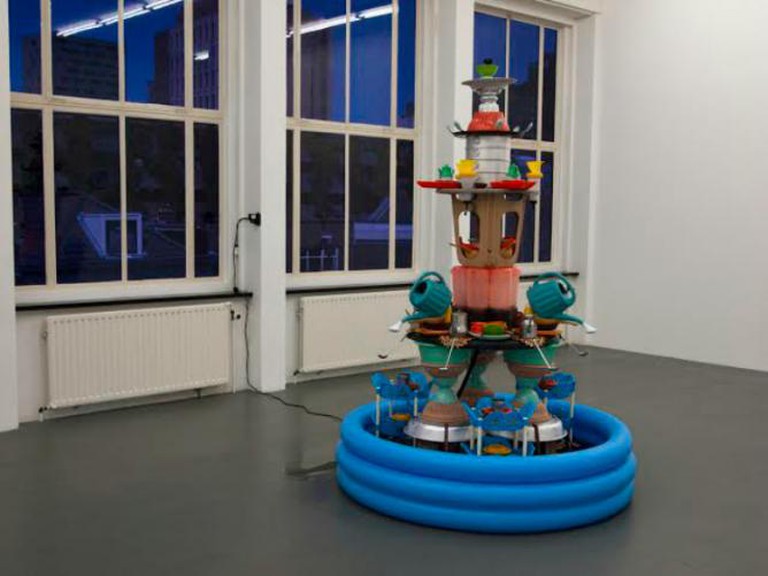 Fountain | © Adrian Wong
One of Hong Kong’s prominent painters of the moment, Lai Cheuk Wah Sarah’s artworks are immediately recognisable for their pale colour palette and abstract subject matter. Her paintings also focus on the mundane, and everyday objects and scenarios that are often overlooked. Lai graduated in Fine Art from the Chinese University of Hong Kong in 2007. That year also saw the artist winning a number of awards, such as the Ramon Woon Creative Prize and the Cheng’s Fine Arts Award in Western Painting. Her works have been exhibited in various galleries in Hong Kong, such as Gallery Exit. Examples of works by Lai include Spotting the light onto a light (2012), How to cut butter into a perfect cube (2013) and Lines (2012).
Open In Google Maps
Hong Kong, Hong Kong
Give us feedback 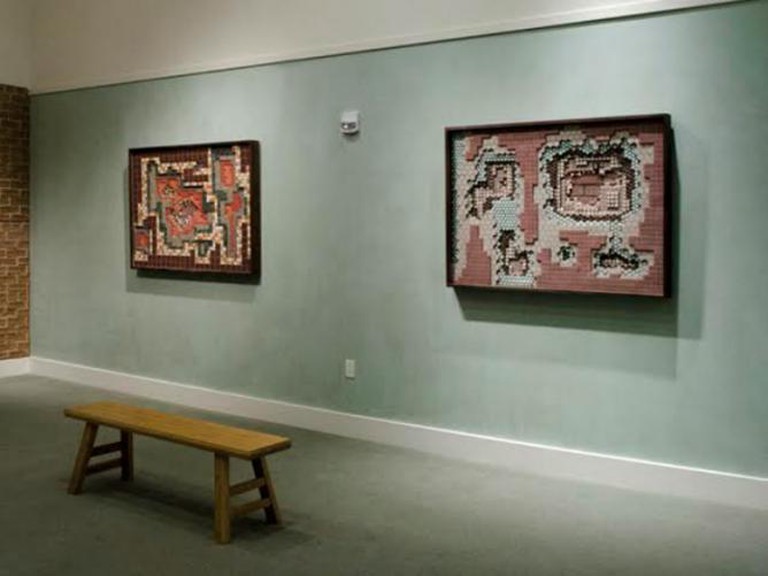 Untitled Walls | © Adrian Wong
Born in Chicago, Adrian Wong has become one of Hong Kong’s most prolific artists working in multimedia. He holds a master’s degree in research psychology from Stanford University, and this influences his approach to art-making. He also lectures in critical theory and teaches sculpture. He is based both in Hong Kong and also Los Angeles. Adrian Wong is also the co-founder and Director of Embassy Projects, an art studio and experimental workspace. Wong’s works vary between installations, sculptures and video art pieces, revealing a whole range of subject matter and themes. Popular culture, the environment and society are just some of the topics portrayed through his pieces. Notable pieces include Untitled (Grate I/II: Shan Mei Playground/ Grand Fortune Mansion from 2012 and Bless All Ye Who Enter Here from 2007. His artworks have been featured in a number of bienniale, festivals and art events. More recently, Adrian Wong was commissioned to create a bar for the Art Basel in 2013 in Hong Kong. He was also awarded the Sovereign Asian Art Prize in 2013.
Open In Google Maps
Hong Kong, Hong Kong
Give us feedback 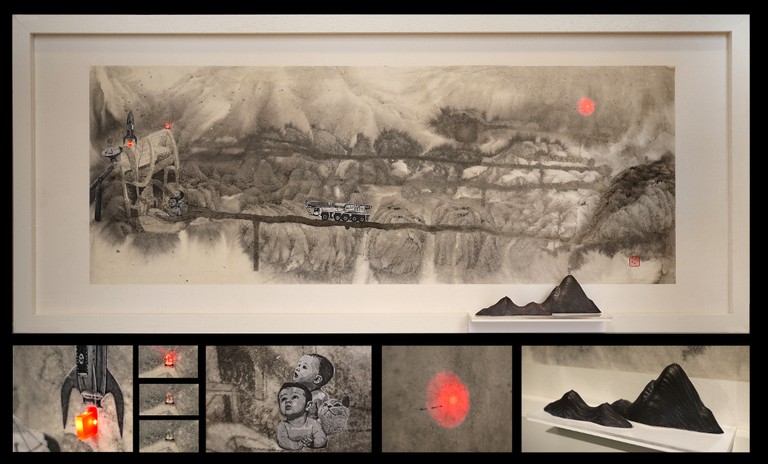 Flourish of Human World 3 by Wong Chung-yu, 2017. Ink and colour on paper, collage, LED. | Image courtesy of the artist and Hanart TZ Gallery
Chow Chun-fai is one of Hong Kong’s leading performance and visual artists. His work actively engages in social and political issues, making him an often controversial figure within Hong Kong’s art world. Chow Chun-fai is the Chairman of Fotanian Artist Village in Fo Tan. His first major work was inspired by his time spent working as a Taxi Driver, when his father became ill. His painting series Hong Kong Taxi (2003-5) is a reflection on the city’s landscapes, and was created using enamel and oil paint on canvas and board. Other important works include Last Supper, Renaissance Trilogy I from 2005 and his Painting on Movie series from 2008. His artworks have been exhibited globally, from Beijing to Verona. More recent exhibitions include I Have Something to Sayand Reproduction of Reproduction,both at Hanart.
Open In Google Maps
2/F, 美安工業大廈, 17-21號 工業街, 葵涌, 新界, Hong Kong
+85225269019
Visit Website
Give us feedback 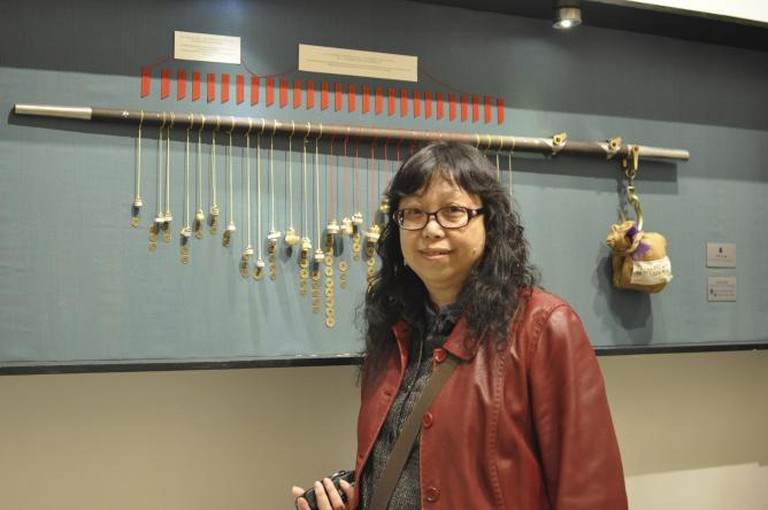 Linda Lai Chiu Han's work is exhibited at the Asia Art Archive | © Linda Lai Chiu Han
Linda Lai Chiu-han is not only an artist, but is also an academic, curator and art historian. Her art practice consists of experimental video art and interactive media pieces that reflect on cultural history, and her research in experimental historiography. She is an Associate Professor at the School of Creative Media at the City University of Hong Kong. Linda Lai Chiu-han started the university’s first sonic art course. She is also the founder and Artistic Director of the Writing Machine Collective. Her artworks have been exhibited widely in Hong Kong as well as internationally, in cities such as Barcelona and London. Selected works include 1906-1989-2012/ Guangzhou-Hong Kong-Shanghai-Anji, her mixed media installation which was commissioned for the 9th Shanghai Biennale, which revealed a mixture of themes from childhood memory to the postal history of Hong Kong, and PUSH: the Quest for a Voice, In Search of a Body and interactive, digital installation. She is also the author of a number of art books such as Crypto-glyph: Dialogues in Many Tongues in the Hidden Crevices of an Open City and [Re] fabrication: Choi Yan-chi’s 30 Years, the paths for interdisciplinarity in art.
Open In Google Maps
11樓, 荷李活商業中心 荷李活道, 太平山, 香港島, Hong Kong
+85228441112
Visit Website
Give us feedback 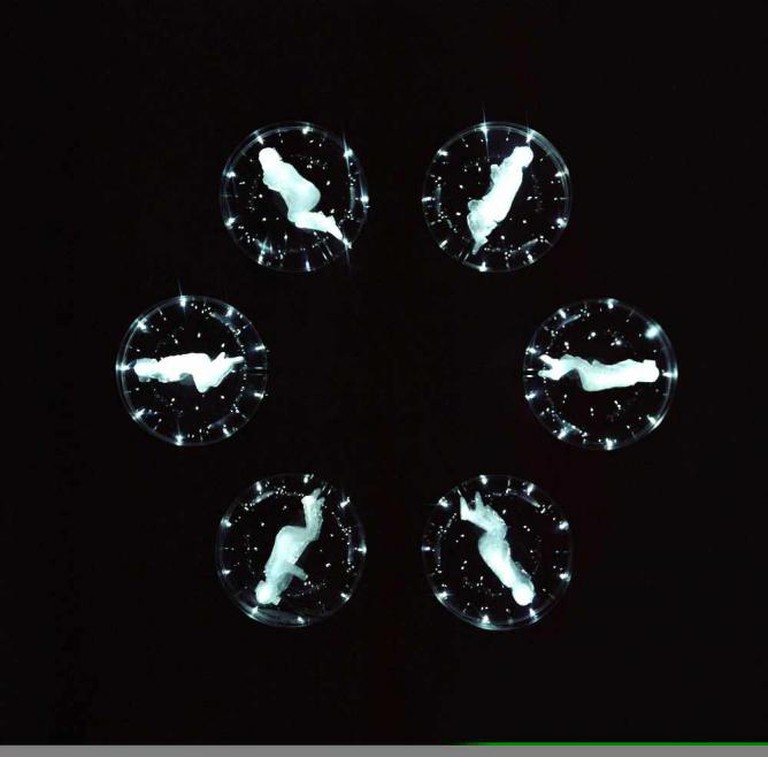 Inside Devil's Advocate | © Amy Wan Man Cheung
A prolific conceptual artist, Amy Wan Man Cheung creates large scale works which oscillate between fantasy worlds and reflections on real life. Amy Wan Man Cheung studied Fine Art at Goldsmiths College in London, and received an MFA from the Slade School of Fine Arts of the University of London. She represented Hong Kong at the Venice Biennale in 2007 with her work Devil’s Advocate: A Song And A Landscape. She also received the Outstanding Young Artist Award from the Hong Kong Arts Development Council that same year. Other key works include Down the Rabbit Hole, ‘TAXI!’ says Alice (2004), Ivory Parables Amid an Amnesiac’s Skin (2005), Atom Ocean: Once we are Dead we Don’t Have to Worry About Dying Anymore (2006), and Ashes unto Pearl (2008). More recently, she has been working with psychologist Prof. Philip Zimbardo of the Stanford Prison Experiment on a piece entitled Imagine Heroand Hankie Bank,which is an immersive theatre and participatory fashion show, which took place in an abandoned Citibank.
Open In Google Maps
1 Man Lam Road, Sha Tin, New Territories, Hong Kong
+85221808188
Visit Website
Give us feedback

Museum
Facebook
Email
Twitter
Pinterest
Copy link
Share
Map View
Wong Wai Yin pushes the boundaries of art-making, creating works through a variety of media, from painting to sculpture to collage. Her works have been praised for their investigations of authenticity, and they frequently probe viewers to question the world around them. Key artworks are Man’s Future Fund, a collaborative project from 2014 with Kwan Sheung Chi, and To defend the core values is the core of the core values (2012), also made in collaboration with Kwan Sheung Chi. Her work has been showcased throughout Hong Kong, as well as around the world in Japan, Singapore and the US. She was also the founder of the Observation Society in Guangzhou. Recent shows include Becoming a Different Person Might be Hard in iPRECIATION in 2011, and a collection of works at Asia Art Archive the same year, both in Hong Kong.
Open In Google Maps
10 Salisbury Road, Tsim Sha Tsui, Kowloon, Hong Kong
Visit Website
Give us feedback 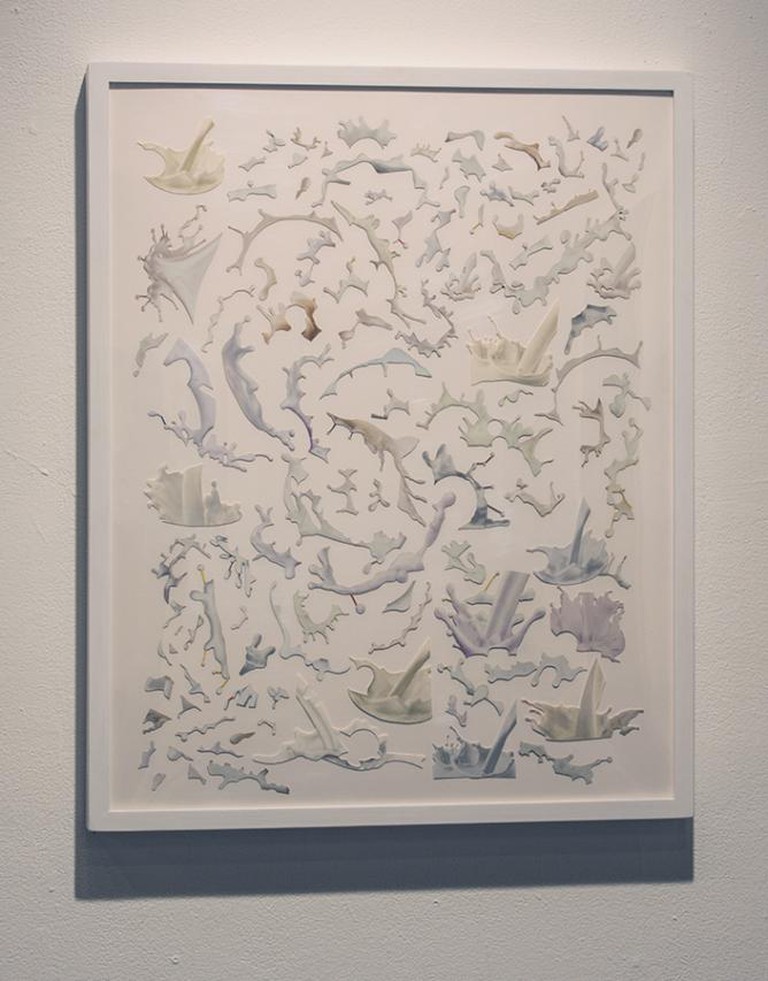 Milk, Splash Series | © Magdalen Wong
Although he had a lucrative career as a designer and advertising executive, Stanley Wong decided to change direction, and to become an artist in order to free himself from Hong Kong’s business lifestyle. He studied the work of Zhu Da, a Buddhist monk and painter, and converted to Buddhism himself. He assumed the pseudonym ‘anothermountainman’ and has since become a prominent name in Hong Kong’s art sphere. He works for charities and teaches for free in many schools in Hong Kong and mainland China. He has received a number of awards including Best Artist (Visual Arts) in 2011 and the Hong Kong Contemporary Art Award in 2012. His Lanweiseries was collected the M+ Museum, which is a photographic project from 2006 to 2012. He is also known for his redwhiteblueseries of works, which consists of installations, photographs and graphic designs.
Open In Google Maps
Hong Kong, Hong Kong
Give us feedback 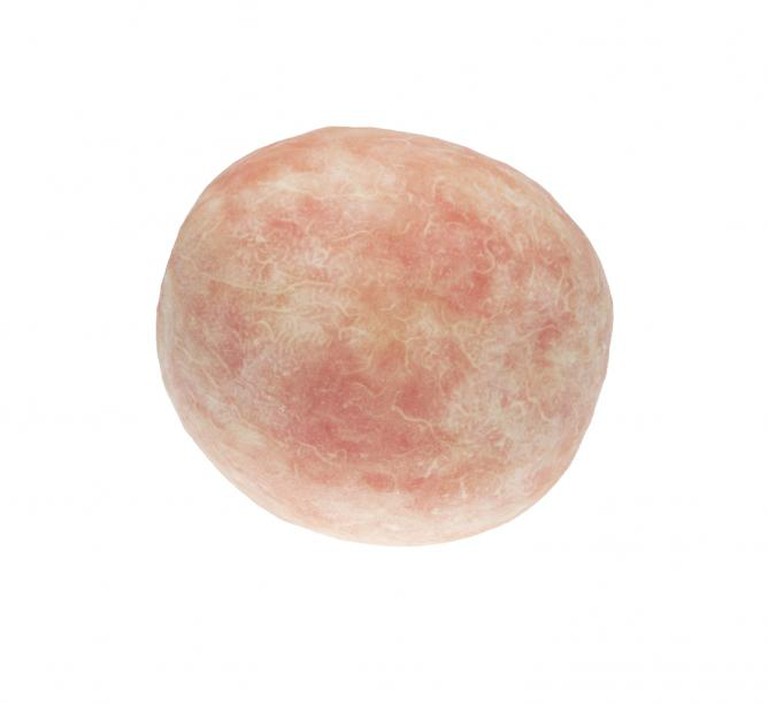 Watermelon, Peeled Series | © Magdalen Wong
Working through a variety of media, from photography to drawing, Magdalen Wong is a multi-discipline artist making her name known not only in Hong Kong, but also worldwide. Since returning to Hong Kong in 2006, her works focus on mundane objects and sensual imagery, taking her inspiration from shops and stores, as well as the internet and Japanese animation. Notable works include her Peeled photograph series from 2010 and her video installation mmm wow from 2012 and her photographic collage entitled Milk Collectionfrom 2010. She is a part of the US based art group ‘i.e. art group’ which create and curate exhibitions. Magdalen currently lectures at the Academy of Visual Arts at the Hong Kong Baptist University. In 2005, she won the Hayward Prize from the American Austrian Foundation in Salzburg. Recent exhibitions include Sunrise Sunsetin 2011 in the Corner Gallery, Seoul, and A Flight of Fancy at the Osage Open Gallery in Hong Kong.
Open In Google Maps
Hong Kong, Hong Kong
Give us feedback 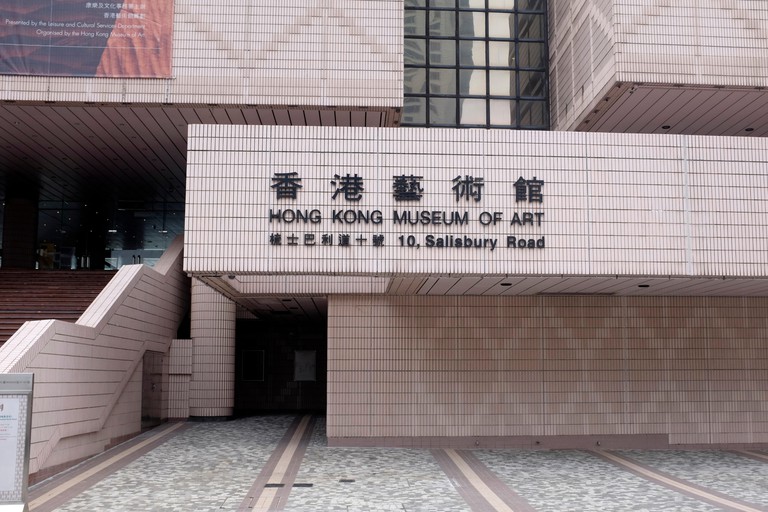 Coming from a background of Fine Art and Book Art, Tsang Kin-Wah’s works have received critical acclaim for his innovative use of language and text. His resulting installations immerse the viewer in a world of paint, video and photography that explores the idea of the sacred, with many of his works drawing on the Bible. Examples of these include his Ecce Homo Trilogy series and his ongoing Seven Seals project. He has exhibited internationally, in places such as the Mori Art Museum in Tokyo and the Chinese Arts Centre in Manchester. He has received a number of awards, such as the Tokyo TDC Prize in 2007, Sovereign Asian Art Prize in 2005 and he was the winner of the Prize of Excellence at the Hong Kong Art Biennial in 2001.