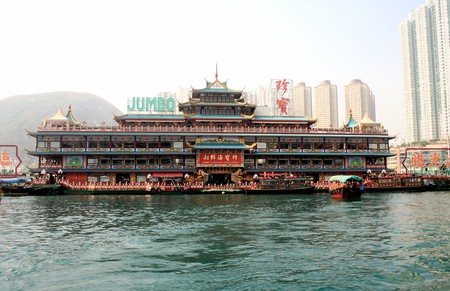 The two restaurants are managed by the conglomerate Jumbo Kingdom, a tourist destination with shopping, entertainment and dining venues. They are connected to each other via a walkway – and despite being described as ‘floating’ restaurants, they are moored by concrete, so diners don’t have to worry about getting seasick. 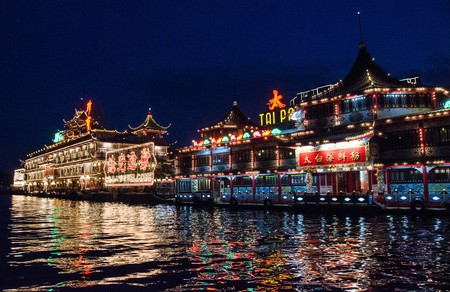 The oldest part of the Jumbo Kingdom is Tai Pak Restaurant, which was constructed in 1957. At the time, floating banquet halls experienced a huge surge in popularity, and at the peak of the craze there were more than ten such floating restaurants in Aberdeen Harbour, although Tai Pak was then the largest of them all.

In the 60s, the owner of Tai Pak conceived of building an even bigger floating restaurant, and construction commenced in 1971. However, that year a huge fire devastated the construction site, killing 34 and injuring 42. Consequently, the owner lost the will to continue the project, and agreed to sell it to two Hong Kong business magnates, Stanley Ho and Cheng Yu-tung.

The Jumbo Floating Restaurant opened in October 1976, at a cost of HK$30 million. It was designed to imitate imperial Chinese architecture, with handcrafted ornaments and murals alone costing HK$6 million. Traditional dragons and pagodas decorate the façade, and at 76 meters long and three storys tall, it remains the largest floating restaurant in the world. 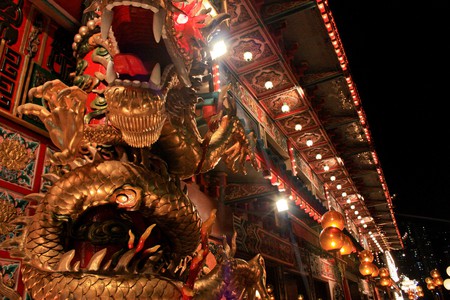 The Jumbo restaurant can accommodate more than 2,000 diners at once. It looks especially stunning at night when its lights and neon signs are reflected in the water. It houses two restaurants – one is the Dragon Court Restaurant, which serves Cantonese cuisine, seafood and dimsum inside an elegant Ming dynasty-inspired interior. The other is the Top Deck, an al fresco Western and Asian restaurant and bar that is renowned for its excellent Sunday brunch.

In 2003, Jumbo Kingdom underwent a multimillion-dollar renovation, transforming it into a theme park with entertainment and shopping venues including a cooking school, a Chinese tea garden and more.