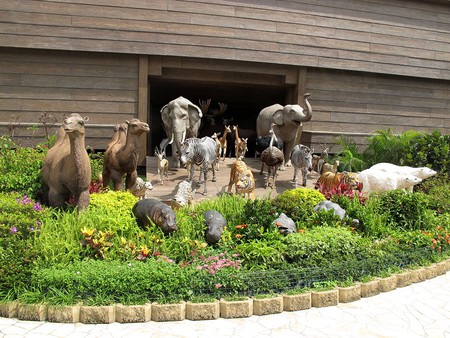 Noah’s Ark is a biblical theme park in Ma Wan. It contains a ‘life-sized’ replica of Noah’s Ark (the largest in the world), complete with 67 pairs of sculptures displayed outdoors. The Ark houses a five-floor museum and youth hostel. The park is aimed at children and promotes the creationist narrative described in the Old Testament.

It may seem surprising to find a Christian theme park in Hong Kong, where only about 11 percent of the population is Christian. Nonetheless, the Ark was developed by Sun Hung Kai Properties, which is owned by devout billionaire brothers Thomas and Raymond Kwok.

Originally, the developers planned to create a more conventional park with themed rides. However, it was decided that there was too much competition from existing giants such as Disneyland and Ocean Park. Instead, they went for something more unique. Noah’s Ark opened in 2009, located right next to the Tsing Ma Bridge on the Ma Wan waterfront.

According to the park, the Ark is built ‘to scale’ in accordance with the dimensions of the original biblical vessel. The Ark is 450 feet long and the interior covers 27,000 square feet of floor space. In addition, there’s the Ark Garden, an outdoor display of 67 life-size pairs of animals (including very large ones such as rhinoceroses, tigers, polar bears, and elephants), as well as waterfalls, ponds, and plants.

Inside, the Ark features a number of interactive games and galleries aimed at teaching children about life, culture, science, history, and music. The Noah’s Ark story is weaved into presentations on the environment and climate.

On of the most impressive elements of the Ark is the Ark Expo, a multimedia experience involving films, videos and exhibits. It contains a 180-degree widescreen theater that introduces visitors to the story of the Great Flood, with an emphasis on acceptance of Christ and the teachings of the Bible. In addition, visitors can see a collection of ark models and a large meteorite, one of the largest to be exhibited in Hong Kong.

The park has received some criticism for not being up front about how strongly it espouses a creationist worldview, possibly misleading parents about what might be in store for their children. Their website claims that the park aims to ‘teach love, social harmony, and care for the environment,’ but does not mention creationism.

By WiNG/CC BY-SA 3.0/Wikimedia Commons
Give us feedback