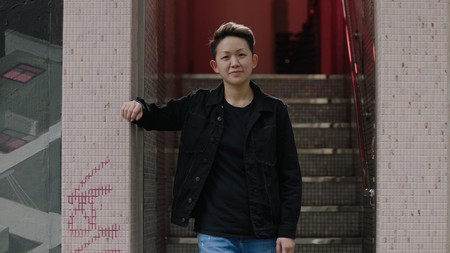 Chef May Chow picks the songs that capture the rapid transformation of SoHo in Hong Kong from a residential area to the hottest place to hang out.

May Chow is such a big fan of SoHo that she’s opened two restaurants in the Hong Kong neighbourhood.

After finding acclaim with her first, Little Bao, the chef launched Happy Paradise in 2017. Her food is known for being an inventive take on traditional Chinese cuisine, and SoHo, with its modern and eclectic mix of entertainment, is the perfect spot for her restaurants.

Chow, who was named Asia’s Best Female Chef 2017 by 50 Best Restaurants, has always enjoyed the multiculturalism of the vibrant district. “When I was younger, SoHo was the place where you felt you were in a very Western part of the city. It was Sunday brunches and eating Italian food. It was almost like being on holiday outside the normal local scene of Hong Kong.”

May Chow on her Soho playlist

SoHo was only formed in 1993 and used to be a residential area. Hong Kong used to be a British colony. Rebecca Pan sang either Chinese songs with English lyrics or English songs with Chinese lyrics. She’s always mixing Western and Chinese instruments as well. She performed all around the world. One of her songs was called ‘My Hong Kong’. In SoHo, [for] her generation, she would have been the first idol for local people living here.

Hacken Lee – ‘Past Love as a Dream’

There was no cantopop in the 1950s. Then, it was still very much Chinese opera singing. Tam Peng Mun emerged around the end of that transition in the 1960s. This is a modern version of his song by Hacken Lee.

The Beatles – ‘Eight Days a Week’

The Beatles came to Hong Kong around 1964. Why do I keep picking the 1960s? Because I live here now and I see a lot of old people around me who are still living in SoHo. They’re around 70 or 80. So I believe, in their 20s, they were listening to this kind of music. This was their Hong Kong. In SoHo, people would’ve been blasting this on their radio and in their homes.

There is a Chinese remake of this Beatles song by Chan Po-chu, the first female cantopop idol in the 1960s. It’s fun. It doesn’t feel like a copy. It belongs to a certain era of time when we were being assimilated to Western culture. Hong Kong was really international, even in the 1960s.

In 1993, the longest outdoor escalator in the world was built in Hong Kong. This was when SoHo became SoHo. This is how proficient Hong Kong is: within three years, SoHo became the hottest place for restaurants, bars and entertainment. Suddenly, there was a huge influx of people. Instead of 10 or 20 years, it only took them three years to completely change it, and that’s purely because of this escalator. So I chose this tongue-in-cheek because when they talked about this area, they said people would never walk so high. It’s too far!

The Mamas & the Papas – ‘California Dreamin’’ and Faye Wong – ‘Dreams’

‘California Dreamin’’ and ‘Dreams’ were in Wong Kar-wai’s film Chungking Express in 1994, one year after the escalator was built. In the movie, they film on the escalator, but shooting into apartments. You see these people living inside. If you look at the director’s choice of music, there was a sense of imperialism, of romance, and this dreamy idea of what Hong Kong was and wasn’t. I love the movie and the songs really represent the tension between cross[ed] cultures, the positive and the negative. Christopher Doyle, who was the cinematographer, shot Happy Paradise with Anthony Bourdain before [Bourdain] passed away, so it’s all interconnected in a way.

My experience of SoHo as I grew up is the day and night. People used to use the escalator during the daytime when it was sunny and it had a really good brunch vibe. That’s the daytime vibe of SoHo. The Commodores’ song is a way of saying this.

It used to be stereotypical Western restaurants serving Sunday brunch. You were going to Italian restaurants and they’d be playing Italian music. A French bistro would be playing French music. There was a restaurant called Yard Bird that did Japanese yakitori and they loved hip-hop. They were into skateboarding. Suddenly, the whole scene of restaurants changed in SoHo. It was no longer about fitting into certain concepts. Chefs are starting to love Hong Kong, showcase the local ingredients and have that international eye.

I think it sums up SoHo today. The energy, the speed. When we talk about restaurants in SoHo, I know people who eat at six restaurants in a night. We’re talking about: “Let’s stop by for some yakitori, drop by Little Bao for a bao and then head over to The Old Man for cocktails.” This is all within a two-hour time frame. In SoHo, the restaurants are smaller. It’s more intimate. SoHo is a five- to 10-minute walk from one end to the other.