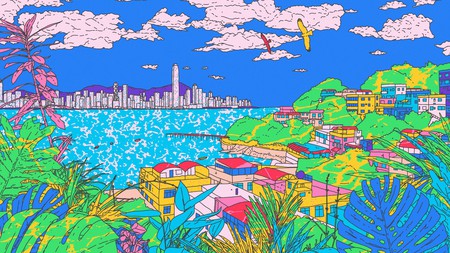 All-night outdoor raves, idyllic biking trails and a thriving artistic community – here’s how Lamma Island became a refuge for three hippies who went in search of something beyond the standard Hong Kong experience.

Think of Hong Kong and you might imagine a skyscraper-laden financial and economic behemoth, with a neon sign for every noodle shop and a noodle shop for every hungry mouth. You’ll think of Bruce Lee and that incredible cross-harbour skyline, and if you know your food, possibly sweet and sour pork, dripping with mouthwatering sauce.

But would you think of all-night beach parties? Or breathtaking mountain-biking trails? Artistic communities more intent on painting golden sunsets than on chasing the capitalistic gold rush?

Lamma Island is one of Hong Kong’s 263 outlying islands and the antithesis of the steel and glass high-rise version of the city. There are no cars and no buildings above three storeys, and it’s home to some of the best seafood in the region.

Barely five minutes into my conversation with Nick ‘The Bookman’, Lamma’s most recognisable resident, he’s arguing that aliens definitely exist and are probably using the moon (which is hollow, was created in the future and time-shifted back to the present) as a spaceship for their expeditions to Earth. He’s meant to be discussing life on the island, so his comments feel somewhat ‘out there’. But it’s not a total non sequitur. He’s just written a post for the local blog about the books he’s read about such theories. And he’s read a lot. “I own about 5,000 books,” he says. “About 90 of them are autographed by the authors. They might be worth some money one day, so if we fall on hard times we could sell them off.”

But while Nick has made his name, and a little money, from books, it’s music that really energizes his conversation and his life on Lamma. The island puts on several large-scale community events over the course of each year, and if you stay beyond sunset, when the tourist hordes usually depart, you’ll bear witness to a kind of full-moon beach party in miniature, with Nick DJ-ing at most of them.

“We throw some pretty good parties here,” he says with a smile. “I’m playing at one tomorrow night in fact at the windmill, kicking it all off. Twenty bucks at the door, bring a few beers and we’ll go all night.”

He has created 64 mixes over the years and has done so old school. “I’m the only one still using CDs – everyone else is using USB sticks. I like psychedelic tunes, ’60s and ’70s and ambient dub and trance, a bit of folk music too. I don’t want to drive people away! Though I don’t give a damn if people dance or not to be honest.”

That kind of attitude, along with his Gandalf beard, eccentric opinions and willingness to divulge them to anyone who stops close by, does no harm to Lamma’s hippie reputation. “I’m proud of it in a way as it strikes at the higher ideals,” he says. “Yes, people smoke a bit of dope – we do have some good parties – but there are no crackheads. I can leave my books out here on the stand, and if a book’s missing there’s always a few dollars in its place.”

He hasn’t left Hong Kong since 1986, due to owing taxes that he can’t afford to pay. But he has no intention of leaving anyway. “Lamma’s been good to me. It’s a nice place to live. I would wander around the Earth and still come back to Lamma.”

Chungking Mansions is one of Hong Kong’s most infamous buildings, notorious for its cheap rents, illicit activities and unsavoury characters. Tell a local you’re heading to Chungking Mansions and you’ll be met with either a knowing smile or a suspicious scowl. But that didn’t put off Shaun Horrocks, who moved straight into one of the small bedsit-style apartments when he first arrived in Hong Kong in 1994 to start a career as a graphic designer, having been persuaded by a friend that good times awaited.

Within a month, though, he had moved to Lamma, convinced its green, windswept hills and cool sea breezes were more his thing. “Over on Hong Kong Island you’re in a thriving metropolis, but when you get here you can breathe,” he says, sitting in one of the island’s bars as the sea, just a few feet away, fizzes on the sand. “Ten minutes from where I live I’m in the hills. Moving here was an easy decision.”

The outdoor life is a major draw for many of Lamma’s immigrant residents who haven’t been able to acclimatise to Central Hong Kong’s dense, high-rise living. Horrocks’s mountain-biking lifestyle fits in well here too. Twice a year he and his friends take to the trails, overgrown since the last season, to clear them out. “We hack back all the undergrowth, and not just for bikes but for hikers, runners and dog walkers too.”

Legally, hacking back vegetation on what is government-owned land is a bit of a grey area. The fact that Horrocks can keep doing it speaks to Lamma’s somewhat off-the-grid existence. “As Lamma is not a part of the country parks there is no mandate as to what can and can’t be done,” he says. “The key issue is not to be disruptive and to be respectful of the graves.”

Traditional gravesites can often be seen on Lamma, in town on the sides of the main thoroughfares and also in the forested areas. “Many locals including Chow Yun-fat [a famed Hong Kong actor who was born on Lamma] really appreciate us keeping the trails open so that they can visit ancestral graves that are not easy to get to.”

Being out in the hills also means Horrocks knows Lamma’s other, less sociable residents better than most – including wild pigs, snakes and the giant golden orb weaver spiders that emerge during the hotter months. Wild pigs swim over to Lamma from the southern edge of Hong Kong Island and often cause havoc to the trails when digging for bulbs and food. And anyone who spends any time walking Lamma’s rural routes will have seen the large, menacing spiders in their huge webs hanging in the trees.

But that’s part of the appeal. “Ten minutes out on your bike and you’re in the wilderness. It’s a forgotten, unknown part of Hong Kong. But Lamma’s great. You can start each day with a swim at the beach, and instead of sirens and noises of people coughing you can hear birds and insects. Perfect.”

Drawn by the cheaper rents and laid-back vibe, artists and musicians have been attracted to Lamma Island for decades. Today that thread still runs strong through the community. The Lamma Art Collective is one of the bigger initiatives, comprising a gallery and events space designed to promote local talent. Smaller ones include art-therapy workshops and locally made handicraft stores.

Agnes Ngim is one person who hopes to reignite her artistic aspirations here. “I stopped painting after I had kids. Was just too busy. But since I came here I’ve been thinking about getting back to it. My target is to be a full-time art teacher here on Lamma.”

Ngim arrived on Lamma after bouncing around Southeast Asia. Back then she was single and freelance, and the buzz of Central Hong Kong was a draw. But after she got married and had a daughter, Lamma’s appeal came into its own. “When I first came to Hong Kong I liked it,” she says. “It was a big city, very globalized. But after a while I felt like I was suffocated. You don’t get to breathe. Lamma is more laid-back, and I enjoy the greenery and fresh air. It’s all about the lifestyle and the slower pace of things.”

She started a weekly art class for some of the kids in the area. “My art classes have no rules, so for me it’s a very different mindset compared to my job as a graphic designer. It makes me happy, and the kids are happy, so it’s good.”

“It’s about being part of a bigger community that’s like you,” says Ngim. “Especially when you have kids, the difference between Lamma and Hong Kong becomes more obvious. Here we have a closer relationship with our neighbours, we have playgroups, we have fresh air. You can’t find this lifestyle any other place in Hong Kong.”