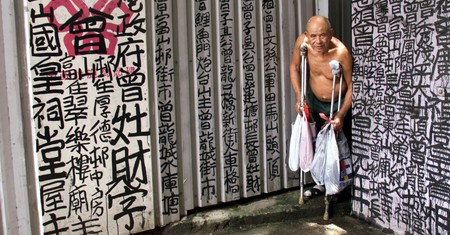 Depending on whom you ask, Tsang Tsou Choi was either a prolific street artist or a vandal. Roaming the streets with his painting kit (stained brushes and a Pot Noodle cup for his ink) tied in plastic bags to his crutches, the self-styled King of Kowloon was often mistaken for a homeless man.

Take the Star Ferry across Victoria Harbour from Central, Hong Kong to Tsim Sha Tsui. When you arrive at the arcade of Tsim Sha Tsui’s Star Ferry Pier, look for a concrete column encased in perspex. Scrawled in fading black ink is one of the last remaining works of Tsang Tsou Choi (1921–2007), the legendary King of Kowloon. 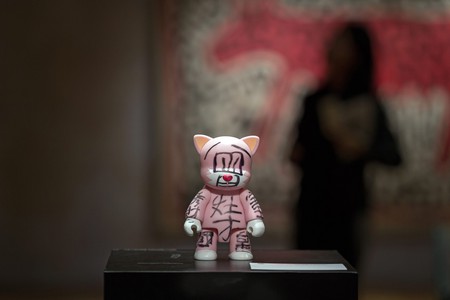 The King spent 60 years plastering the walls of Hong Kong with his cries of indignation. The tagging behind the perspex at Tsim Sha Tsui, although rare, is a typical missive. It asserts Tsang’s sovereignty over Kowloon, China and, for good measure, even England.

Tsang crowned himself the King of Kowloon. He claimed to have discovered documents in a temple that showed that his ancestors had owned land there. No one has verified those documents, but Tsang maintained his family’s land was stolen when the British occupied the area in the late 19th century. As the rightful heir to the land, Tsang demanded it back.

Besides signing his fanciful moniker “King of Kowloon”, he often scrawled foul language against the Queen of England, whom he considered a usurper of his land. After Hong Kong was returned to Chinese rule in 1997, Tsang turned his words against China instead. For decades, both the government and the weather washed Tsang’s work away, forcing him to be even more prolific.

When the former British colony was returned to China, people romanticised Tsang and his works as a symbol of Hong Kong’s collective search for cultural identity. It was as though his claims of sovereignty echoed a broader longing for autonomy. But Clarke doesn’t believe Tsang was speaking for the people. Instead, Clarke thinks Tsang was just speaking out about his own marginality. 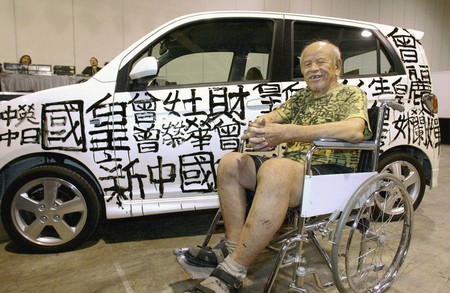 Tsang himself was cryptic about his own motivations. Joanne Shen, a filmmaker who shot a documentary about the King of Kowloon, captured a moment on film when Tsang was interrupted at work and forced to move on. Tsang went angrily on his way, shouting with all the entitled indignation of a king. When asked why he continues to write, Tsan replied, “To show people.”

The coming of fame

When Tsang rose to prominence in the 1990s, his graffiti was still as unique as it was virulent. His first exhibition, in 1997, made him an instant cult icon. He inspired other artists and fashion designers, and even featured in an advert for Swipe cleaning fluid – the type that could wash his own work away. In 2004, one year after his work featured in the Venice Biennale, Sotheby’s auctioned one of his pieces and it fetched a handsome $7,050.

Lau Kin Wai, art curator and friend of the King, remembers a different side to the formidable Tsang Tsou Choi. “He was a very nice guy, and he was very considerate,” says Lau, who remembers a shy man who would sit quietly and write if in the company of too many people. Nevertheless, the King enjoyed the warmth of the spotlight. It was a warmth not replicated at home: he was estranged from his eight children, three of whom had already died when Tsang passed away in 2007.

“Tsang’s family felt frustrated with him, because they felt that what he was doing wasn’t normal, and it shamed them,” explains Lau. “He loved his family, but his family rejected him, or even hated him. So you could interpret his work in light of that, too.” 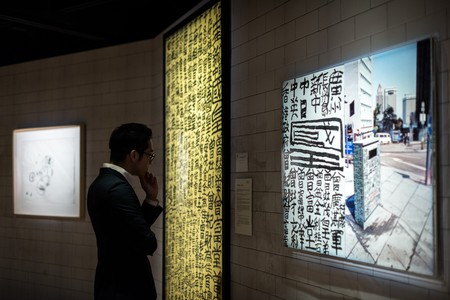 Family features prominently in Tsang’s work. He would often detail his lineage, listing the names of his ancestors all the way back to the original landowner, to demonstrate his rightful inheritance of the land in Kowloon. Perhaps the constant repetition of his family line was cathartic for him.

Misfortune plagued Tsang’s life. He was crippled when a dumpster fell on him when he worked at a waste sorting centre, and he was also involved in a near-fatal car accident. In his old age, Tsang gasped with the strain of standing straight to paint the top of a wall. Yet something kept driving him to go out and write.

With all his fame, it’s easy to think of Tsang as an artist. His work is still occasionally exhibited today, and it is evidently deemed important enough to be kept preserved on the pier in Tsim Sha Tsui. But beneath all that, Tsang was just a poor and lonely man asking to be heard. It’s harder to think of him that way, because it’s a sad reminder that there are a million other marginalised people in Hong Kong whose stories are never told. 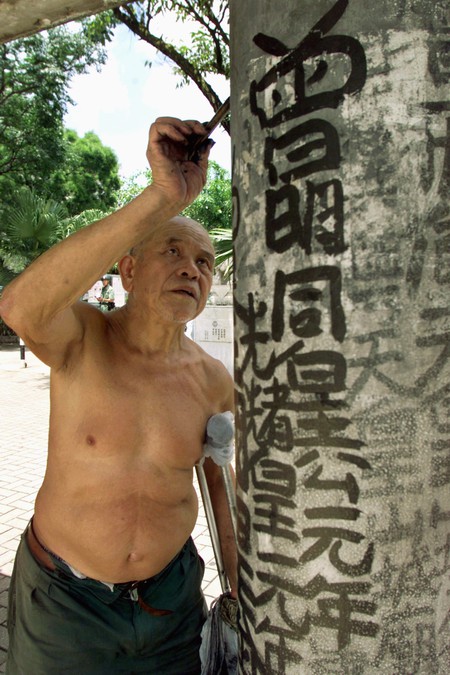 This is an updated version of an article originally written by Sally Gao.