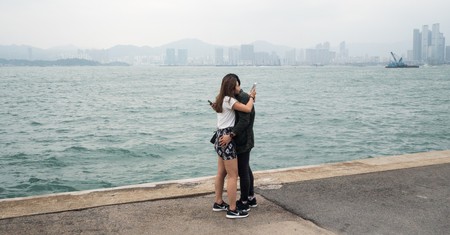 A couple is sharing an embrace while checking their phones at the "Instagram Pier", Hong Kong | © Pierfrancesco Celada

An unlovely freight dock in Hong Kong’s Sai Wan district has been drawing a growing stream of local Instagrammers. Culture Trip discovers what “Instagram Pier” says about the young people who go there – and about Hong Kong itself. 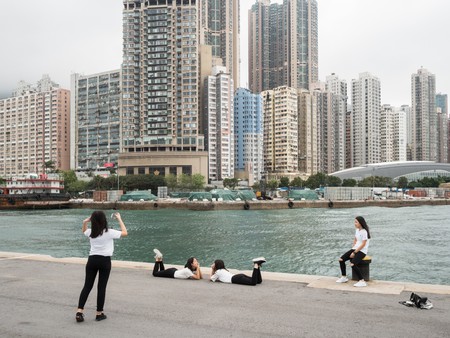 A group of young girls photographing themselves at the "Instagram Pier", Hong Kong | © Pierfrancesco Celada

It’s a Friday evening and Ma Alvin Ma, a 24-year-old mobile phone salesman, is at the West District Public Cargo Depot in Sai Wan with a group of friends – along with his Olympus OM-D Mark 3. He’s here to capture impressions of the site, which he’ll then share on Instagram.

And they’re some impressions. Docked along the greyish asphalt pier are mammoth cargo barges in bright yellow and red. Near one of the boats, an elderly angler sips on a packet of Vitasoy as he plucks a small baitfish from a blue bucket by his side. On the horizon looms Tsing Ma Bridge, the 11th-longest suspension bridge in the world. Further along the pier, enormous cranes look as if they’re challenging the residential and office towers along Des Veoux Road – the road that runs parallel to the Cargo Depot – to a “Who’s taller?” contest. 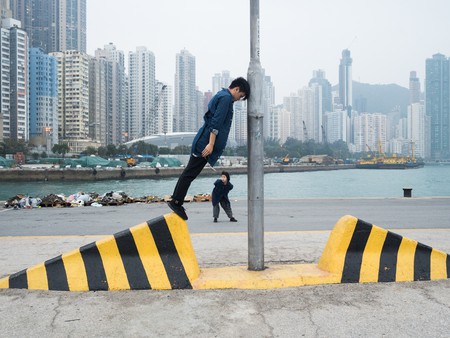 A couple photographing themselves on a lamppost at the "Instagram Pier", Hong Kong | © Pierfrancesco Celada

“Hong Kong is a city of industry. All we do here is work, work, work. I think that’s why the industrial equipment speaks to the youth of Hong Kong,” says Ma, who lives in a less-than-500-square-foot Kowloon apartment with his parents and two younger siblings. “The machines go nowhere. They do their job and they remain parked here for the rest of the time – just like us,” he chuckles. 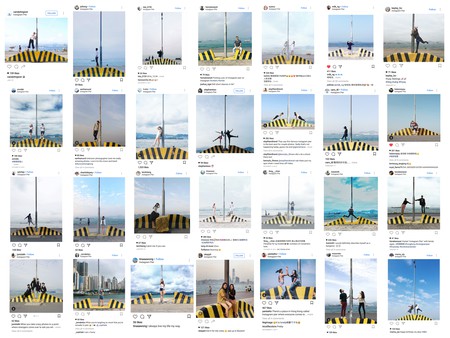 With its stacks of green, red, blue and grey oil drums, massive blocks of concrete, cargo pallets, towering bundles of bamboo poles, graffiti-covered shipping containers, old lampposts and bumblebee-striped caution barriers, you can see what Ma means when he calls the waterfront strip “ugly but interesting”. These elements come together to produce an industrial urban scene that he believes expresses well the disgruntled exhaustion of Hong Kong’s youth. Indeed, so many come to snap and post now that the nickname “Instagram Pier” has gained traction.

“I heard about this place from newspapers and online, and there are so many hashtags and Instagram posts,” says Ma. Even though the pier looks crowded enough that you might think people are arriving for a concert, Ma says one of the reasons he likes it here is because there’s more space than in many other parts of Hong Kong, which is one of the most densely populated cities in the world. 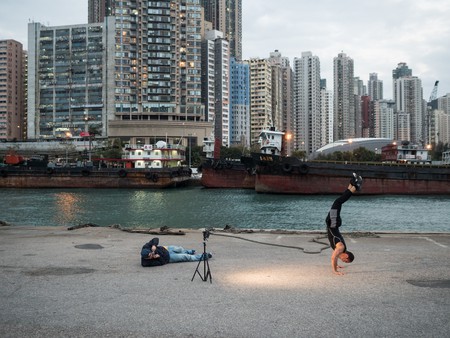 A man is balancing on his hands for a photoshoot at the "Instagram Pier", Hong Kong | © Pierfrancesco Celada

Public open spaces are rare in Hong Kong. According to a 2017 study by Hong Kong public policy think tank Civic Exchange, the average open space available for each Hongkonger is about two square metres – the size of a toilet cubicle. 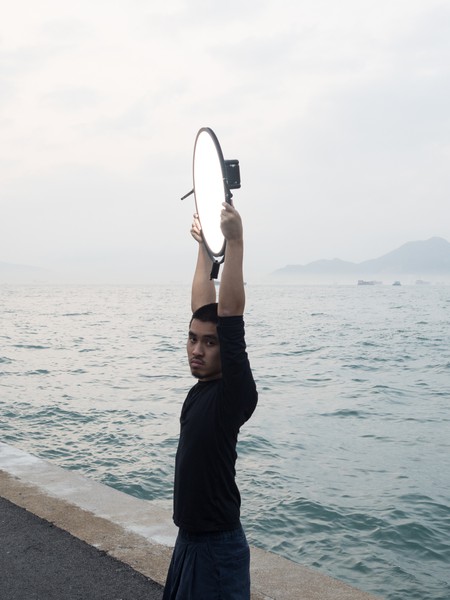 A man posing with a reflector at the "Instagram Pier", Hong Kong | © Pierfrancesco Celada

So when the small and medium-sized enterprises using West District Public Cargo Depot were squeezed out of business by large transportation corporations, the pier caught on as a spot for sunset-watching, morning and after-work jogs, dog walking, fishing, skateboarding – and photo-taking. This was from around 2010 onwards. Come 2013 it was named one of Hong Kong’s best public spaces in the first ever “Hong Kong Best Public Space” award organised by the local non-profit organisation Hong Kong Public Space Initiative. 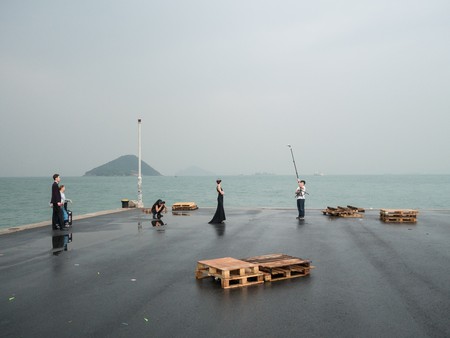 A wedding photo shoot at the pier, in the background is Green island at the "Instagram Pier", Hong Kong | © Pierfrancesco Celada

In 2014 and 2015, new MTR subway stations opened up in Sai Wan – in Kennedy Town, near Hong Kong University in Shek Tong Tsui, and in Sai Ying Pun – which made the pier much more accessible. The new subway stops led to steady gentrification of the Sai Wan District, with more locals and visitors to the area looking for photo opportunities. 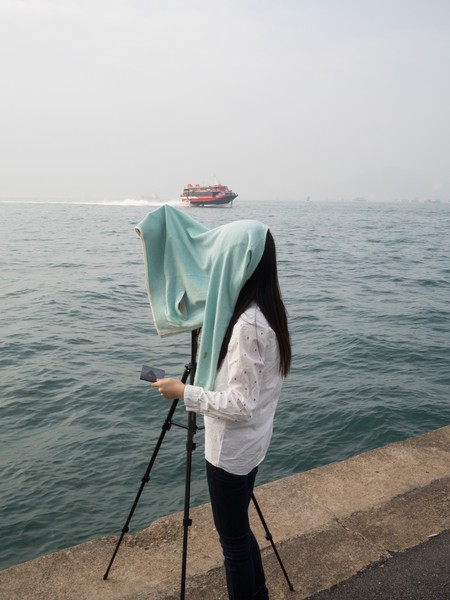 A photographer on the "Instagram Pier", Hong Kong | © Pierfrancesco Celada

Kathy Chan, a 24-year-old Hong Kong MTR employee and her part-time photographer boyfriend Fong Cheung have arrived armed with a Sony A7R2 camera. They’d taken the subway from Hung Hom in Kowloon (where they live) to HKU station, then walked for about 20 minutes to the Pier. It’s one of those rare autumn evenings when the sky is clear and the air is crisp, but Chan says they’d hoped for rain earlier in the day. “A lot of people like to come here right after a rainstorm: when the ground is wet, there are deep puddles that reflect the high-rise buildings to the north, and the sea to the south and west, and this makes for amazing photographs. Some people call this pier ‘Mirror of the Sky’,” she says. 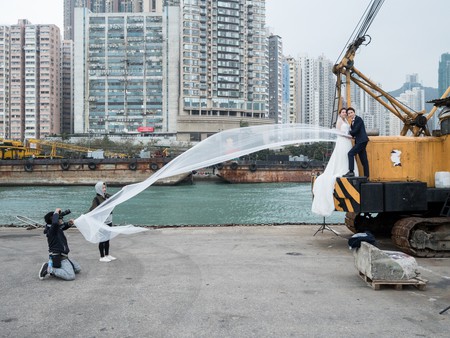 A couple pose for a wedding photoshoot on a crane at the "Instagram Pier", Hong Kong | © Pierfrancesco Celada

Fong adds that even without the reflections, there are still many interesting images to capture at Instagram Pier. “This spot is very photogenic because you have the sea on one side and all the tall buildings of the city on the other.” She hopes to get a few shots of fishermen and dockworkers loading or unloading cargo from the pier. 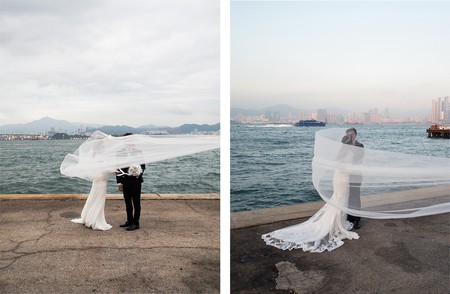 Dorothy Law and Catherine Lo, two 17-year-old local students, are posing in front of a shipping container with a giant Hello Kitty spray-painted on it. Law explains that the pier became popular among youngsters sometime in 2015 and that many of their school friends come here to make short films or music videos on the weekends. “In Hong Kong, there are not many opportunities to see different scenes besides the city with all the high-rise buildings cramped together. I think that’s why this place is so special. We learnt about it through Instagram sites like @insta_pier,” says Lo. 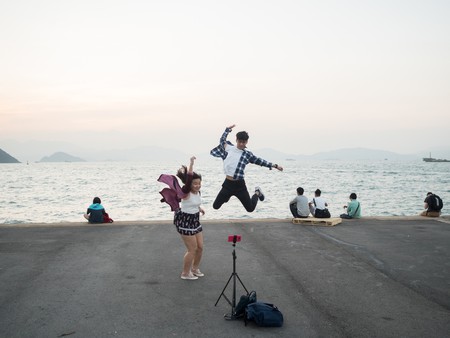 A couple is jumping for a selfie at the "Instagram Pier", Hong Kong | © Pierfrancesco Celada

It’s not all about Instagram at Instagram Pier, though. School teacher Zhou Xu Lan, on a two-day holiday from Guangzhou, says she’s come all this way because she saw the pier in the movie Transformers: Age of Extinction, plus all her friends have told her about it. While she was snapping away, she met and chatted with another group of youngsters from Guangzhou whom she might join for a bite later. “This is not a typically beautiful place,” she says. “But there’s something very unique about it. It is so colourful and very cool, and you can enjoy the sea breeze. Because there are so many young people here, the atmosphere is really quite fun and lively.” 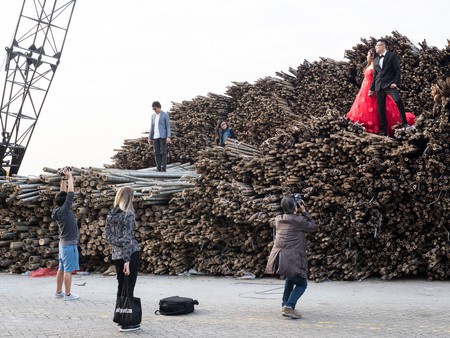 Backstage of a wedding photoshoot over a bamboo deposit at the "Instagram Pier", Hong Kong | © Pierfrancesco Celada
Give us feedback