How To Celebrate Chinese New Year in Hong Kong 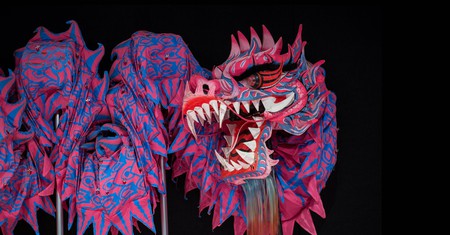 Chinese New Year is Hong Kong’s biggest annual celebration. A hive of festivities take place during this period; from parades and fireworks to horse racing and traditional dragon dances, there’s bound to be something you’ll enjoy. Here’s a roundup of when, where and how to celebrate the year of the pig in Hong Kong.

This year, Chinese New Year falls on Tuesday, 5 February, and marks the start of the year of the pig. In Hong Kong, the national holiday typically takes place from the first to the third day of the first lunar month, which means that the festivities this year will run from 5 – 7 February.

How to celebrate Chinese New Year in Hong Kong

The Chinese New Year Night Parade in Hong Kong is the liveliest and most colourful celebration of the year. The parade typically features a mix of colourful floats, acrobats, costumed lions, dragon dancers, drummers and, of course, firecrackers. Street performers warm up the crowds from around 6pm. The parade route winds along Nathan Road, Salisbury Road, Canton Road and Haiphong Road. Be sure to arrive early to get a good spot! 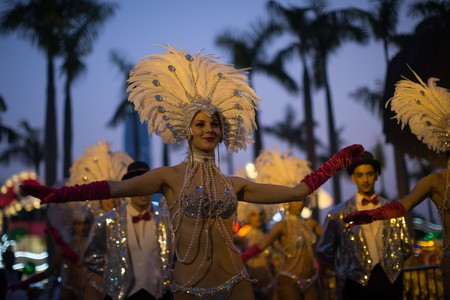 Watch the fireworks display from the harbour

The Chinese New Year fireworks display is the biggest fireworks spectacular of the year in Hong Kong. The captivating 23-minute display takes place on the second day of the Lunar New Year. You can watch the fireworks from either side of the harbour in Tsim Sha Tsui or Central and Wan Chai. You can also watch the displays on the water by boat or from The Peak.

Alternatively, skip the crowds by reserving a spot at a restaurant or bar with a harbour view. A number of restaurants with ‘front row seats’ are even offering special Chinese New Year fireworks menus to help you celebrate in style. Options include Felix, located on the 28th floor of the Peninsula Hotel; Aqua, perched on the 29th floor of One Peking; and the two-Michelin-star Yan Toh Heen at the InterContinental. 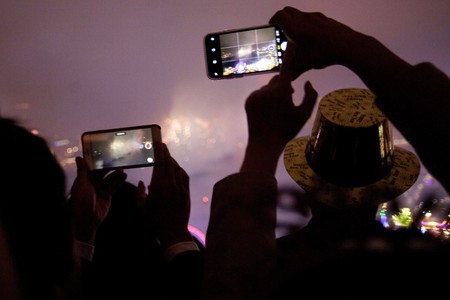 Revellers take photos of fireworks as they light up Victoria Harbour to celebrate the arrival of the new year 2018, Hong Kong | © Alex Hofford/EPA-EFE/REX/Shutterstock

Horse racing continues to draw the biggest sporting crowds in Hong Kong, and Chinese New Year Race Day is the most popular day of them all. The Sha Tin Racecourse pulls out all the stops for the 100,000 plus fans that turn out for this annual event. The main race is the Chinese New Year Cup, but there are also traditional lion dances, performances and a raffle with prizes of up to HK$290,000 (£28,250). General admission to the event is HK$10 (£1). Tourists with their passports on hand can gain access to the Members Enclosure for HK$130 (£12.60). 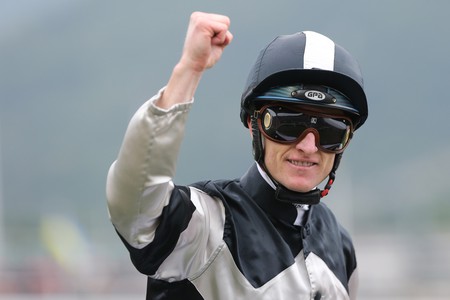 Shopping in Hong Kong is good all year round, but the city puts on some of the best sales during the run-up to Chinese New Year. Prices are slashed considerably in Hong Kong’s malls. Some stores even give out vouchers in red lai see packets (good luck money envelopes). In Hong Kong’s numerous street markets, you can find an endless array of festive items and trinkets. You can pick up pig-themed decorations at Tai Yuen Street Market in Wan Chai, Ladies Market in Mong Kok and the Temple Street Night Market in Yau Ma Tei. 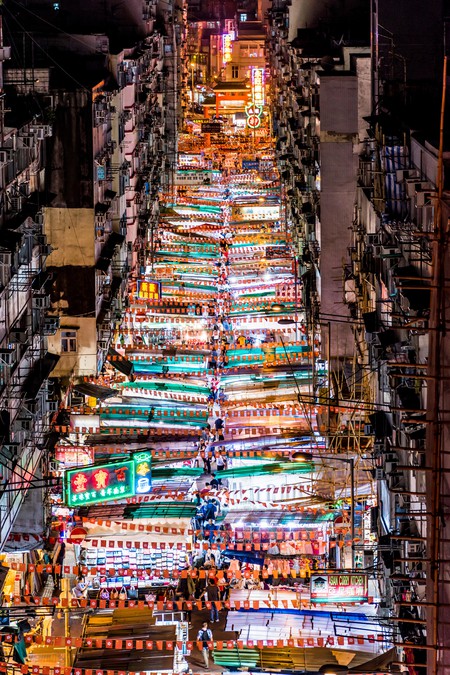 Visit a flower market in Victoria or Fa Hui Park

Between Wednesday, 30 January, and Tuesday, 5 February, you’ll have the opportunity to visit one of the city’s delightful pop-up flower markets, where you’ll find stalls selling decorations, flowers and potted plants. While all sorts of colourful flowers will be sold, orchids, peonies and potted orange trees are the most popular because they are considered auspicious. We recommend visiting the market at Victoria Park in Causeway Bay, or the one at Fa Hui Park in Mong Kok. 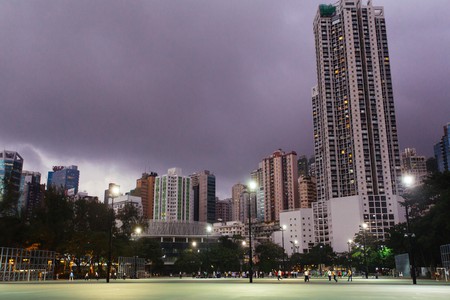 Think there’s nothing special about a lantern? You’d be surprised. The lanterns exhibited during Chinese New Year are massive, colourful and come in impossibly complicated shapes and sizes. The lantern carnival at the Hong Kong Cultural Centre Piazza takes place from 6pm to 11pm, from 25 January to 24 February. 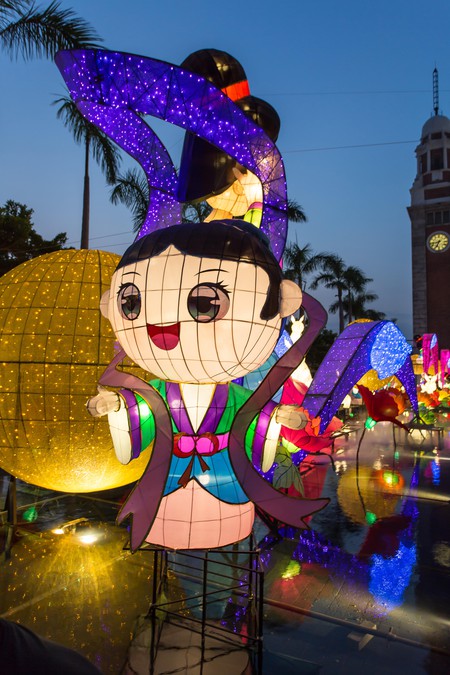 Chinese New Year is the busiest time for Hong Kong’s temples, where locals flock in the thousands to thank the gods for the past year and pray for good fortune in the new one. Some of the largest and most popular temples include Wong Tai Sin Temple, Man Mo Temple and the Lam Tsuen Wishing Trees, where the floats from the Night Parade will be on display. 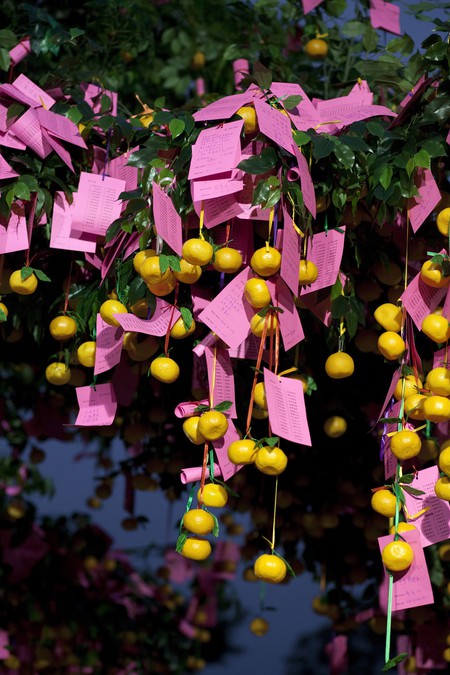 Wishes on Joss Paper Tied to Plastic Oranges Hang in the Branches of a Wishing Tree in Lam Tsuen, Hong Kong | © Jerome Favre/EPA/REX/Shutterstock

What to eat during Chinese New Year in Hong Kong

There are several auspicious foods that Hongkongers like to eat during Chinese New Year. These foods are believed to bring good luck and prosperity.

Steamed glutinous rice cake: sounding similar to ‘higher year’ in Chinese, it’s traditional to eat steamed glutinous rice cake each year to symbolise raising oneself higher.
Black moss: in Cantonese, it is called fat choi, which sounds like ‘prosperity’.
Tongyuen: these sweet glutinous rice balls are a popular dessert eaten during Chinese New Year. The word tongyuen sounds like ‘reunion’, which fits the time of year when coming together as a family is considered most important.
Dried oysters: in Cantonese, it is ho si, which sounds similar to ‘good business’.
Pig trotter: this, or sometimes a pork knuckle, represents getting extra financial income.

In addition to these auspicious foods, most Hong Kong families will come together on Chinese New Year’s Eve for the annual reunion dinner (tuen nin dinner) that takes the form of a big feast to commemorate the past year. It is considered the most important family get-together of the year. 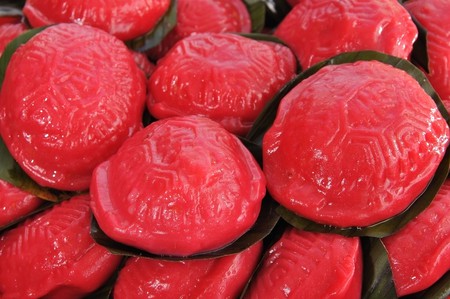 How to say ‘Happy New Year’ in Cantonese

In Hong Kong, where Cantonese is the official language, the common way to say ‘Happy New Year’ is gong hei fat choy, which literally means ‘wishing you great happiness and prosperity’.

This is an updated version of an article originally created by Sally Gao. 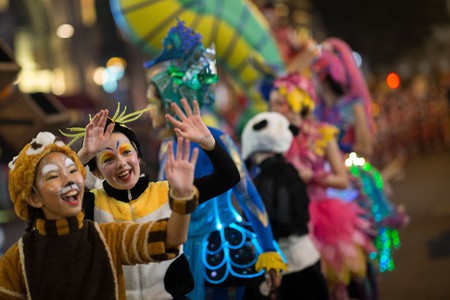