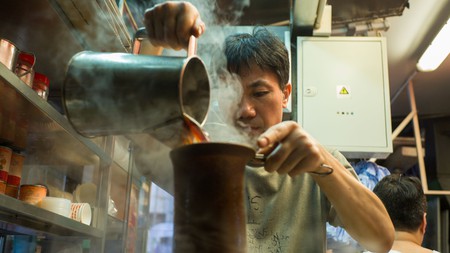 It is no exaggeration to say that Hong Kong exists because of the British obsession with tea. Their lust for it was so intense it led to not one, but two wars. These conflicts resulted in China ceding Hong Kong to British rule in 1842. Since then, the once sleepy fishing village has transformed into a bustling international hub. However, Hong Kong’s creation has much earlier origins, in a story that’s deeply intertwined with the world’s love for tea.

Tea: Made in China

The great monk Bodhidharma was seven years into his planned nine years of wall-gazing meditation when, at one point, he got sleepy and nodded off. When he awoke, he was so mad with himself that he ripped off his own eyelids, determined never to let it happen again. As the flaps of skin hit the floor, the first ever tea plants sprouted into existence…

At least that’s how one Chinese legend describes the origin of tea. A less gruesome mythology says that tea was discovered by accident. In 2732 BCE, Emperor Shenong was about to drink some boiled water, when leaves from a nearby tree blew into his cup. He took a sip, and was pleasantly surprised by the aromatic taste. He described a warm feeling as the drink flowed through his body.

Whatever the actual origins, it’s known that China has been cultivating and drinking tea for thousands of years. To begin with, it was drunk by the imperial elite as a way to alleviate fatigue. But during the Tang dynasty (400 to 900 CE) it spread to the masses, switching status from being a medicinal brew, to a daily refreshment shared among family and friends. Tea became enshrined as one of the seven essentials of Chinese life – a list of basic household necessities for health and spiritual growth. Tea plantations spread across the country and merchants got filthy rich. 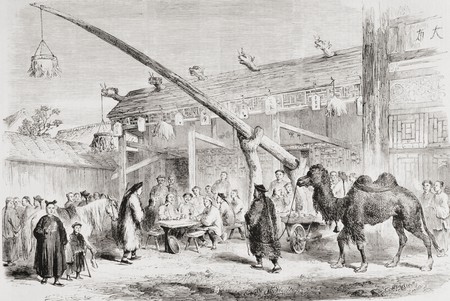 An illustration of a tea house in Beijing in the mid-19th century, from L’Univers illustré in 1866 | © Universal History Archive / Universal Images Group via Getty Images

Due to China’s secretive society, tea did not spread to the west for centuries. Emperors typically saw the Chinese way of life as being superior, and sought to limit foreign influence, fearing a destabilising influence. Europeans would have to wait until the 1600s before they could get their first sip. First imported by Dutch merchants, tea soon found its way to British shores.

Tea arrives in Britain and makes a splash

The first person to sell the drink in England was Thomas Garway, which he served from his London coffeehouse in 1657. He had to print pamphlets educating the public on its virtues, which he declared to be “most wholesome, preserving in perfect health until extreme Old Age”, as well as being able to “helpeth the headache” and “maketh the body active and lusty”.

Branding tea as a cure-all tonic worked. Upper-class gentlemen drank tea in coffeehouses, and the queen made it her drink of choice, thereby popularising it with the female aristocracy. Tea became a status symbol, a sign of wealth and respectability. A tea drinker would be expected to be refined, dignified and polite – quintessential qualities of a proper Brit. 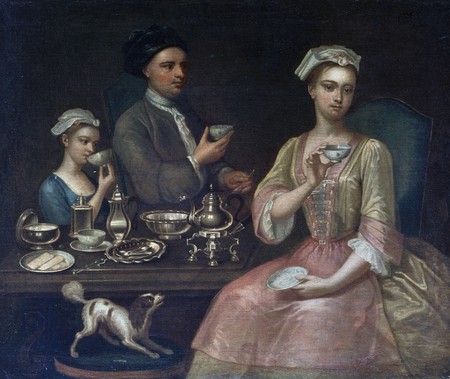 Once tea became an affordable luxury for the rising middle class, its popularity soared. Members of the working class would even buy second-hand tea leaves from the bourgeois, letting the leaves steep longer to compensate.

By 1800, Britain was importing 20 million pounds of the stuff from China every year. Import duty alone accounted for 10 percent of British revenue. They couldn’t get enough. But there was one problem: money. After the costly American Revolution, Britain was strapped for cash. They had very little silver left, which was the only payment China would accept.

To satisfy their thirst for tea, the British had to get creative.

Britain would become global drug dealers to feed their own addiction. Opium – the plant from which heroin derives – was grown in Indian colonies and smuggled into China. Unsurprisingly, demand went through the roof. Chinese officials, troops and citizens got hooked, smoking away the days in opium dens. The government decided it had to get rid of the drug. Opium was seized and burned, and the British were pushed out of China. They retreated to a small, barren island – a sparse backwater of hamlets and fishing communities that would eventually come to be known as Hong Kong. 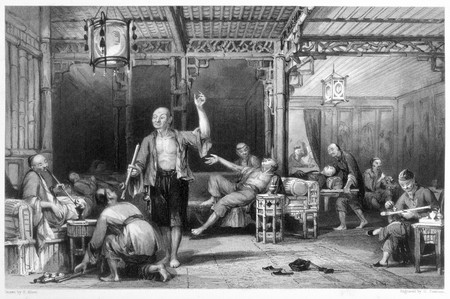 Tensions between Britain and China were high. After failed negotiations and escalating skirmishes, the British fired on the walled city of Canton in 1840, so beginning the first of the two armed conflicts known as the Opium Wars. China lost both, and in the ensuing negotiations, Britain was granted sovereign rule over Hong Kong for the next 156 years.

Across this tumultuous period, the commodity that started it all went through some big changes. Tea transformed as it passed hands from Chinese merchants to British gentry, back to Hong Kong locals.

The first big innovation was the shift from green to black. Both types of tea come from the same leaf, but black tea is fermented, giving it a stronger flavour and also increasing its shelf-life – perfect for shipping long distances. Before long, black tea overtook green in popularity in Britain.

To balance out the bitterness of black tea, some Brits began adding milk and sugar – though the rationale behind this was beyond improving the flavour. In the case of milk, people would pour it into the cup before the tea to prevent weak china cracking under the boiled water. Others have suggested that unscrupulous bosses would add milk to their workers’ tea to make the drink cool down quicker, thus reducing break times. 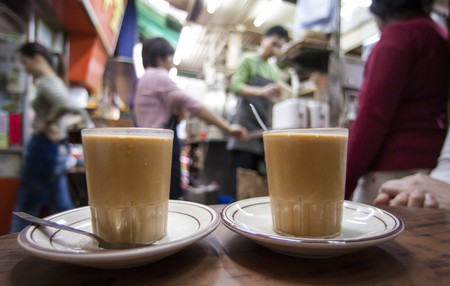 As for the addition of sugar, it was a status flex. Tea was initially consumed by the upper classes, so it only made sense to combine it with sugar, another ostentatious luxury at the time. Hosts would allow guests to add their own sugar to their drink, flaunting their wealth for all to see. All this tea decadence culminated with Anna Russel, the seventh Duchess of Bedford. To stave off hunger pangs before dinner, she would order a mini meal to be served to her boudoir in secret, consisting of tea, bread, butter, cakes, biscuits, scones and other niceties. When exposed, she was not ridiculed as feared, but instead her practise caught on and became known as afternoon tea.

British colonialists took these tea customs to Hong Kong. For a long time, their tea was served exclusively in hotels or high end restaurants – out of reach for most locals. But by the end of the Second World War, British habits began to finally trickle down into Hong Kong street culture. In 1950, cha chaan tengs began popping up. Informal, cheap and no-nonsense, these diners would serve Hong Kong-style Western cuisine to the masses. Here, after a history spanning thousands of years, crossing the continent and coming back, tea would be changed once more.

Lai cha is Hong Kong’s take on British tea with milk and sugar. Brewed with Ceylon and a secret mix of other types of black tea. It also goes by silk stocking milk tea, or pantyhose tea, because a sackcloth resembling tights is used to filter the leaves. This step is what gives the tea its velvety mouth-feel. 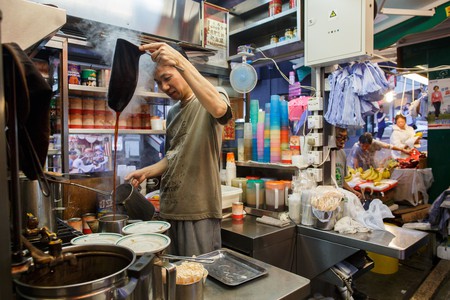 The brew is then mixed with milk, usually evaporated or condensed. This switch happened because fresh milk was not widely available in post-war 1950s Hong Kong. Tinned food and drink was used instead. 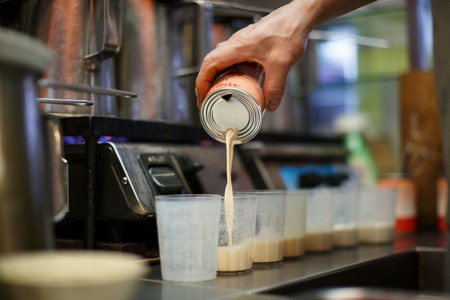 Typically served in a glass – yes, a glass – the final result is a rich and comforting drink that tastes uniquely sweet. The tea flavour is strong and packs a caffeine punch, yet it goes down smooth. Enjoy it with a crumbly pineapple bun – the Asian scone – slathered in butter to complete the modern Cantonese take on afternoon tea. 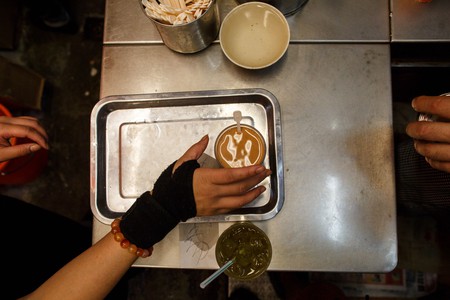 The city gulps down this drink 2.5 million times a day. Its historical importance has been recognised by the local government, who have put it on Hong Kong’s list of items of Intangible Cultural Heritage. Made in Hong Kong, passed through Great Britain and steeped in ancient Chinese tradition, it is the combined efforts of emperors, rulers, royals, merchants, farmers and common folk – all looking for a refreshing pick-me-up to break up the day.