How Downtown Abbey Sparked a Wave of Chinese Butlers 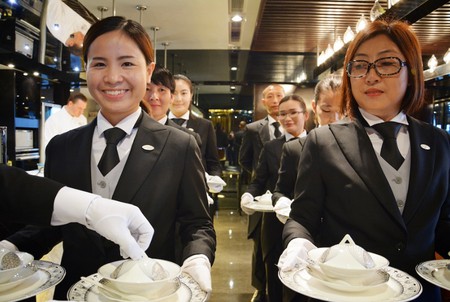 UK television show Downton Abbey has been a phenomenal success in China. It’s even been credited with triggering a boom in demand amongst China’s wealthy families for homegrown butlers trained in the ways of a British manor.

It seems butlers are back, at least they are in China.

For many, the thought of having a butler may seem antiquated and a tradition only kept alive through movies and television shows. However, it’s the phenomenal success of these shows, such as the UK period drama Downton Abbey, that has sparked a recent butler boom in the country.

In fact, China now has the fastest-growing market in the world for butlers – with a desire for them to be much like Downton Abbey’s own Mr Carson.

Subtitled episodes of Downtown Abbey were watched by a staggering 160 million viewers in China, fuelling the demand for the services of butlers trained in the ways of a British stately home. 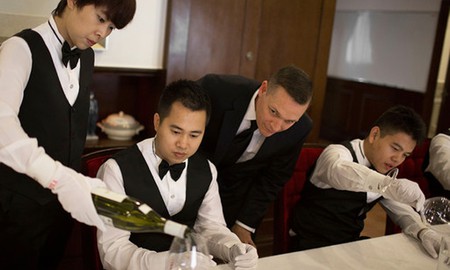 “It seems whenever I’m asked what it is I do here in China and I reply that I’m a professional butler, people will smile and say ‘Oh, just like Downton Abbey… Mr. Carson!'” Says Christopher Noble, head instructor at Jeeves Training in China.

For more than a decade, butler training schools in China have been in business, but the number of recruits and demand for butlers has risen sharply in recent years.

“The recent butler boom here in China, is in my opinion, the direct correlation between the wealthy and travel,” says Noble. “Simply put, the middle and upper classes are travelling more today than ever before. The Chinese are being exposed to and experiencing Western culture and more of them want to have the finest of service in their own home.”

They operate like a butler boot camp of sorts, giving lessons on the minutiae of everything from managing homes, to dinner service, to packing luggage and opening car doors. 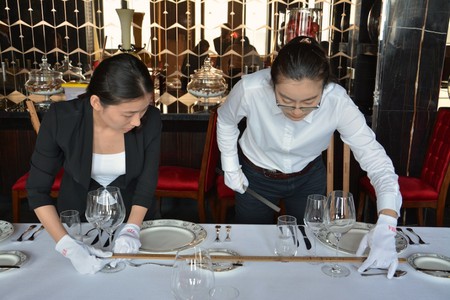 For many of the butler students, the old school service that they’ve seen on Downton Abbey is the standard they measure themselves against. In fact, many will watch and re-watch episodes of the show for tips on how to perform their duties.

Upon graduating from the training academy, the butlers hope to attach themselves to China’s growing number of superrich.

According to the Hurun Rich Report, as of 2016, China is now home to 609 billionaires, more than any other country in the world. For many of the country’s rich, having their own butler is seen as the ultimate status symbol.

Typically, a butler in China can expect to earn monthly wages of $3,000 or much higher as personal butlers, depending on experience.

“Butlers in China can make a great living undoubtedly,” says Noble. “I do see that the highest salaries being paid are for students that have professional butler training in their background.”

Commonly, a butler will be either in a live-in position or live-out. A live-out position most often includes an apartment and all expenses covered by the employer.

“Some of the great aspects of working as a butler are enjoying living and working in an environment of the rich and famous,” says Noble.

“The wealthy have acquired the finest of everything. As a butler we take great pride in maintaining as well as using some or all of these items. Such as fine linen, ceramics, art work, porcelain, gold, silver and diamonds, not to mention luxury automobiles, private jets and yachts, the list is endless.”

However, whilst the job may have its occasional perks, it can often be highly unglamorous, involve huge sacrifice and be a lot more demanding than many other service jobs.

Whereas traditionally, butlers were regarded as respected managers of the household and above most menial tasks, Chinese employers often treat butlers as expensive lackeys who should be on call 24 hours a day. 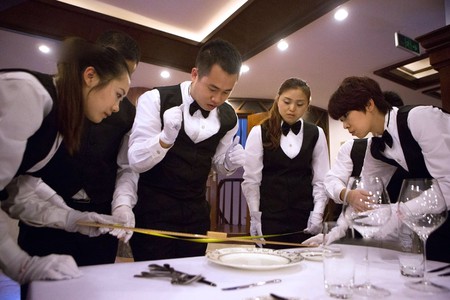 Whilst it’s hard to estimate just how many butlers are currently working in China, it could well reach into the hundreds of thousands in the country’s more prosperous southern cities. A growing trend is for luxury real-estate firms to sometimes bundle butler services in with the homes they sell.

In any case, the butler boom looks set to continue as a growing number of wealthy Chinese families regard having a butler as a sign of good taste.

Meanwhile, Downton Abbey may have aired its final episode in 2015, but if Mr Carson is looking for work, he’ll have no shortage of offers in China.