A Guide to Hong Kong’s Neighbourhoods 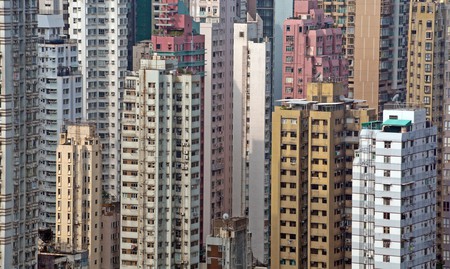 Hong Kong is one of the most cosmopolitan cities in Asia, and each of its neighbourhoods contributes to this rich mosaic. Whether the nightclubs of Lan Kwai Fong take your fancy or the markets of Mong Kok are more your thing, there’s always something to see and do here.

The city of Hong Kong comes in two parts: there’s Kowloon, which is more traditional, and there’s Hong Kong Island, which is the glitzier side of town. Kowloon is filled with dai pai dongs, cha chaan tengs and traditional seafood and Chinese medicine shops, and also offers easy access to mainland China via Shenzhen. If you’re after a bit of luxury and a pulsing nightlife scene, the island side is where you should be headed – here you’ll also find easy access routes to the region’s many outlying islands. From the soaring skyline of Central to the bustling markets of Mong Kok, these are the corners of Hong Kong every traveller should seek out and explore.

Take a quick glance at Central’s glittering skyscrapers and it would be easy to dismiss Hong Kong’s financial hub as boring. But beneath the canopy of this concrete jungle lies some of the city’s most exciting (and exclusive) bars, restaurants and modern-art galleries. Perched on the north shore of Hong Kong Island, the district’s transport links are as good as you’d expect from a place named ‘Central’ – this is where you’ll find the Victoria Peak Tram, the Mid-Levels Escalator and the Star Ferry. 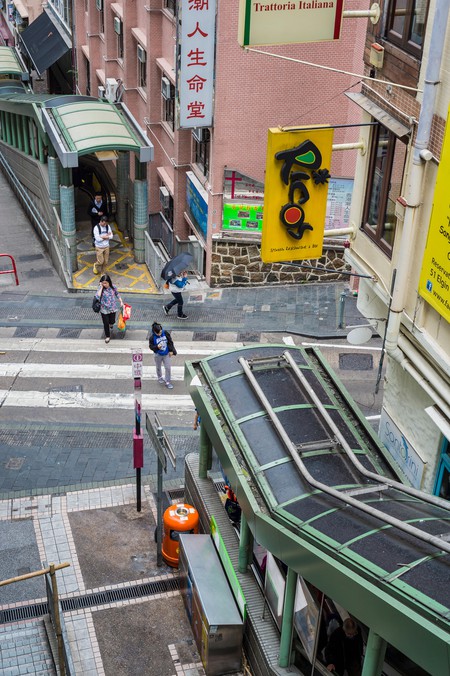 If suits own Central, then hipsters control Sheung Wan. Sitting in the shadow of Central’s high-rises just west of Hong Kong’s towering business district, Sheung Wan was a typical residential neighbourhood until it began to modernise rapidly in recent years, welcoming a wave of trendy coffee shops, bohemian vintage stores and cutting-edge eateries to its streets. Here, you can shop for antiques on Hollywood Road; visit Man Ho Temple, one of the oldest in Hong Kong; and take photos of the street art in PoHo, the area around Po Hing Fong and Tai Ping Shan Street. 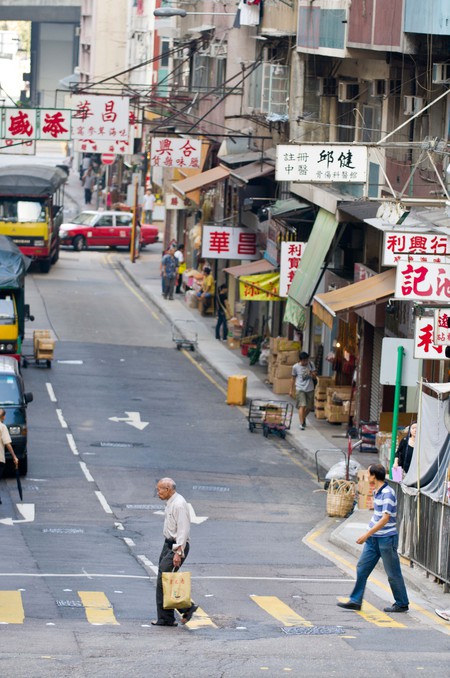 SoHo is another spot favoured by Hong Kong’s arty crowd. Sandwiched between Central and Mid-Levels and sitting next door to the craziness that is Lan Kwai Fong, SoHo is short for South of Hollywood Road and covers the area between Staunton and Elgin Streets. All along the Mid-levels Escalator route are where cool new bars, restaurants, boutiques, comedy clubs, galleries, design stores and cafés seem to spring up every day. 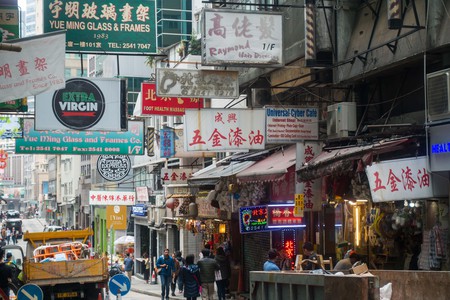 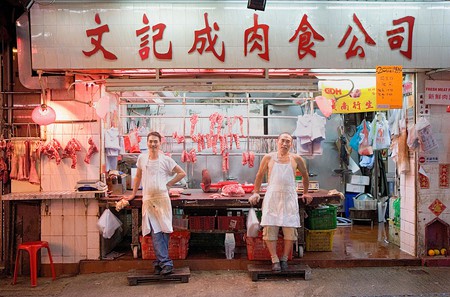 Welcome to Hong Kong’s party central. Home to more than 100 bars, Lan Kwai Fong has a venue for everyone. Young professionals, expats, backpackers, cashed-up locals, yuppies and anyone else thirsty for a drink or three converge on this part of town on the weekend, flooding legendary nightspots like Club Qing, Levels and Cé La Vi. 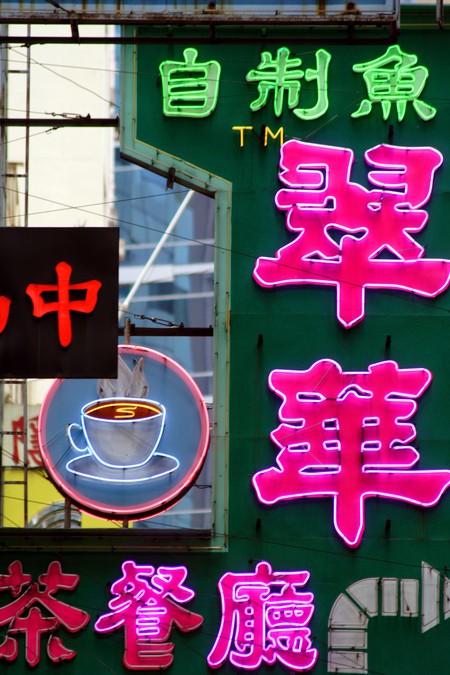 This district might be mainly residential, but the Mid-Levels boasts some of Hong Kong’s best views from the slopes of Victoria Peak. Hop on one of the 20 escalators or three ‘travelators’ snaking between the glitzy apartment blocks to escape the Central smog and enjoy some fresh air in one of the mountainside parks, then climb even higher to the summit of Victoria Peak for peerless vistas over Hong Kong. On the way back down, make sure to stop off in one of the many boutiques, bars and bistros that line the escalator route. 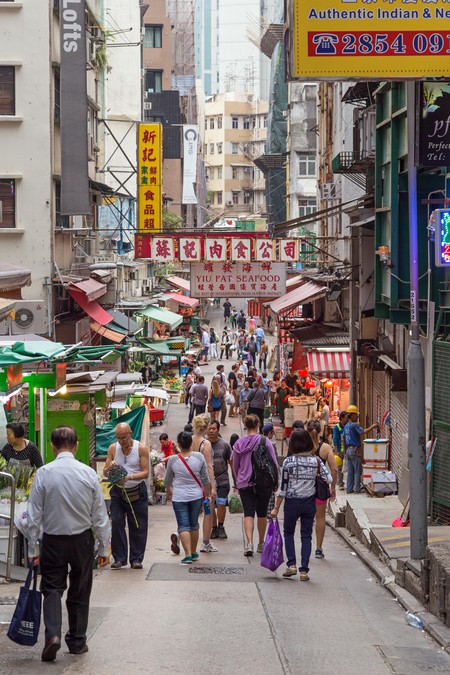 Wan Chai used to be infamous for its red-light district, but the sleaze and smut has made way for stylish hotels and cultural centres. Occupying the waterfront east of Central, Wan Chai has traded raunchy sailors and boozy bars for the avant-garde Hong Kong Arts Center, the world-class Academy for Performing Arts, and the iconic Hong Kong Convention and Exhibition Center. Just east of Wan Chai sits Causeway Bay – an area teeming with department stores – and to the south is Happy Valley, home to one of the most famous horse-racing tracks on the planet. 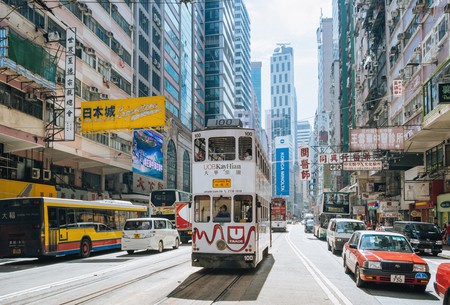 Jump on the Star Ferry across Victoria Harbour to reach one of Hong Kong’s liveliest neighbourhoods on the southern tip of the Kowloon Peninsula. Tsim Sha Tsui is one stop that every visitor should add to their Hong Kong itinerary. Take in Nathan Road’s neon-lit Golden Mile, the Avenue of Stars – China’s answer to the Hollywood Walk of Fame – and gargantuan shopping malls such as K11 and Harbour City. This neighbourhood has a veritable smorgasbord of upmarket dining options: visitors can choose from Michelin-star fine dining, traditional Cantonese cuisine and international fare from pretty much everywhere around the world. 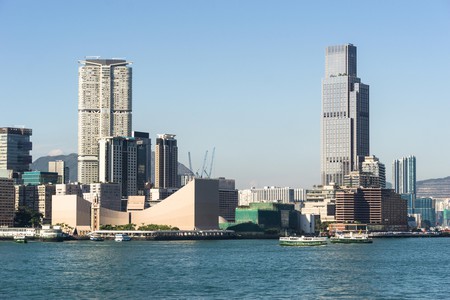 Stroll through the serene Kowloon Park to reach Jordan, a winding web of busy markets, alleyways and street stalls. Bordered by the ultra-modern skyscrapers of Tsim Sha Tsui and Mong Kok, Jordan has somehow clung to its ‘old Hong Kong’ feel: the alleys are crowded with an eclectic collection of traditional herbalists, feng shui masters, and hole-in-the-wall eateries serving hot pots and dim sum to diners sitting on plastic stools along the street. By day, travellers should explore the historic Tin Hau Temple – where fishermen flock to worship the Goddess of the Sea and pray for their protection at sea – and by night, bargain hunters can head to Temple Street Night Market to test their haggling skills. While you’re in the area don’t skip Yau Ma Tei, the neighbourhood next door, where you’ll find the quirky Jade Market and more great restaurants. 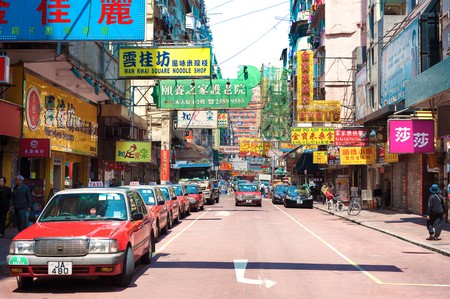 Mong Kok is all about one thing: markets, and lots of them. The air here is filled with the smells of food wafting from the stalls on Sai Yeung Choi, Dundas, Fa Yuen and Soy Streets – perfect for satisfying your hunger after a long day exploring the Ladies’ Market or the district’s specialist markets dedicated to birds, flowers and even goldfish. Hipsters should venture further north to Sham Shui Po, an up-and-coming food and shopping hub. 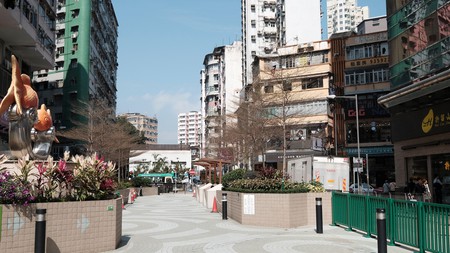 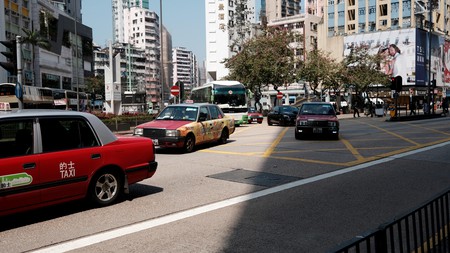 Sitting on 40 hectares (100 acres) of land that has been reclaimed from Victoria Harbour, West Kowloon is Hong Kong’s newest neighbourhood. Investments of over $20 billion Hong Kong dollars (£1.9 billion) will be pumped into creating 17 arts and cultural venues, including the flagship M+ museum. It already houses the city’s tallest building, the glistening International Commerce Centre, where visitors can experience the vertigo-inducing sky100 observation deck. Watch this space. 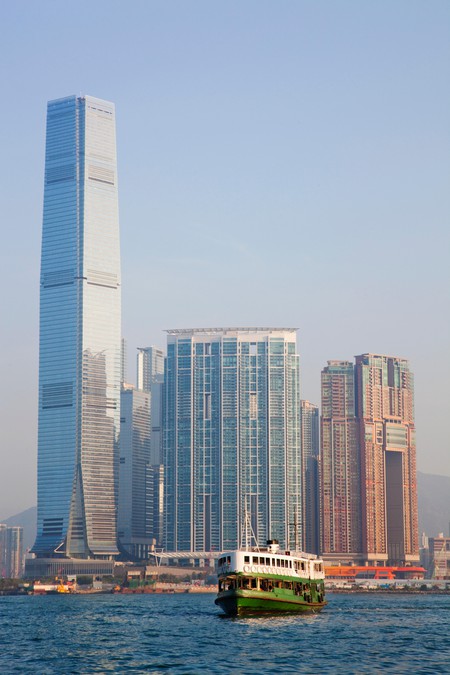 This is an updated version of a story created by Sally Gao.