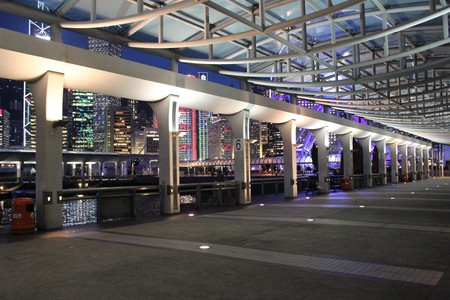 Hong Kong boasts some of the world’s most exciting architecture and a vibrant community of young, adventurous designers and artists. It’s no surprise therefore, that the city lays claim to an array of design-focused restaurants, in which the architecture and interiors are every bit as exciting as the food. Located everywhere from boutique hotels to revivified heritage buildings, these are the top 10 design restaurants in Hong Kong. 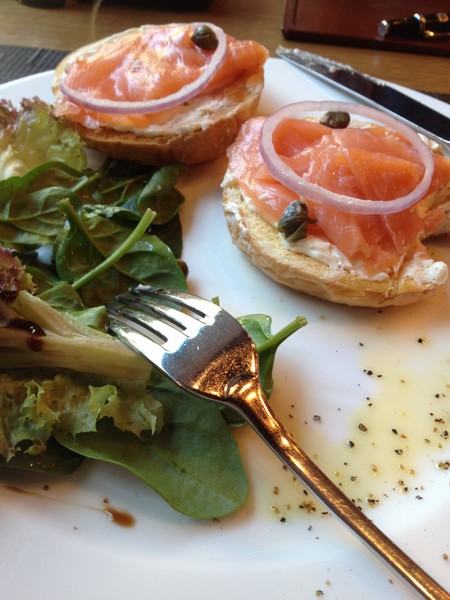 Above and Beyond at Hotel Icon

At the Terence Conran designed Hotel Icon, you’re spoiled for choice when it comes to design-focused restaurants, as all three of the hotel’s dining venues are the work of London-based Sir Terence. Its restaurant Above and Beyond however – on the 28th floor – that offers the best design and dining experience. With the air of an old-fashioned gentleman’s club, gorgeous harbor views and artworks by Hong Kong’s most celebrated contemporary artists (curated by local designer Freeman Lau), the restaurant combines the Hong Kong love of business with great design. The rest of the Hotel is just as impressive, with its gravity-defying wood, glass helical staircase and indoor vertical garden – the largest in Asia.
Open In Google Maps
17 Science Museum Road, Tsim Sha Tsui, Kowloon, Hong Kong
+85234001318
Visit Website
Give us feedback

Restaurant, European, $$$
Facebook
Email
Twitter
Pinterest
Copy link
Share
Map View
The work of interiors guru Joyce Wang, who also worked on the Hollywood Roosevelt Hotel, AMMO is one of Hong Kong’s most exciting new design-focused restaurants. Located in Asia Society Hong Kong, a contemporary culture hub, the space is dominated by a breath-taking floating spiral staircase, inspired by Jean-Luc Godard’s surreal movie Alphaville, which hangs mid-air like a work of art rather than connecting to the floor. Surrounded by verdant gardens and with three of the four walls composed entirely of glass, AMMO itself stands for ‘Asia, Modern, Museum and Original’.
Open In Google Maps
9 Justice Drive, Admiralty, Hong Kong Island, Hong Kong
+85225379888
Visit Website
Give us feedback 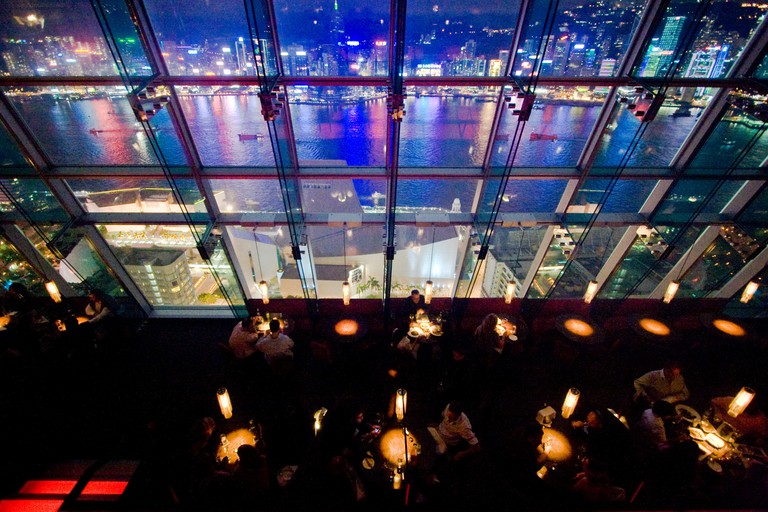 Enjoy one of Hong Kong’s most stunning harbour views at Aqua | © dbimages / Alamy Stock Photo
If you want an incredible view of Hong Kong’s harbor, one of the world’s most striking modern waterways, then make your way up to the 29th floor penthouse of One Peking Road, where you’ll find Aqua. Part of a conglomeration that stretches from London to Beijing, the restaurant serves international cuisine and stand-out sushi. But it’s the design that keeps the customers coming back — revivified in 2011 by London design firm David Collins Studio, the two-story dining room is ribbed with iron girders and boasts floor-to-ceiling glass walls looking out across Victoria Harbor. On the lower level, the dining room is bedecked in dark blues with subtle nods to nautical aesthetics, while the upper bar area allows guests to sip cocktails whilst enjoying unimpeded views of the water below.
Open In Google Maps
One Peking Peking Road, Tsim Sha Tsui, Kowloon, Hong Kong
+85234272288
Visit Website
Give us feedback

Named after New York’s first Chinese convenience store, at 32 Mott Street, Mott 32 in Central takes the ‘East meets West’ concept as its guiding light. Located in the bowels of the Standard Chartered Building, the restaurant’s decor marries icons of both Chinese and American design and is the work of Joyce Wang. Wang met the challenge head on, creating false light sources and breaking the basement space into more intimate areas. The stark spiral staircase and industrial chandeliers of the entrance lobby are reminiscent of New York loft design. This is combined with minimalist Asian elements, such as the wall of Chinese calligraphy pens. In 2014, the restaurant received the World Interior of the Year Award. 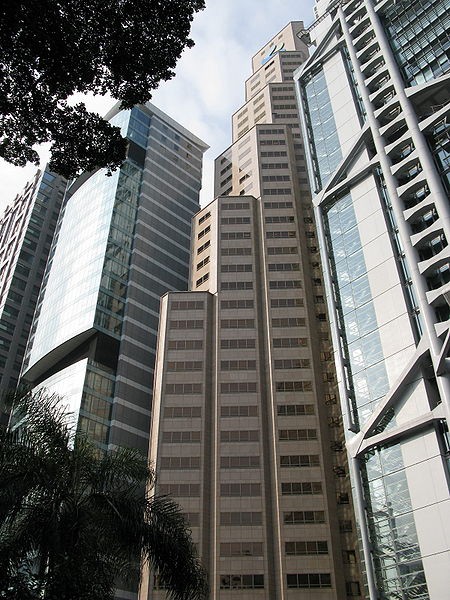 A wildly popular local venue, Cafe Gray Deluxe is located on the top floor of Upper House, one of the city’s fanciest design hotels. The restaurant and cafe, boasting a Michelin star, provides diners with amazing views over Victoria Harbour and its twinkling skyscrapers. The restaurant’s interiors mirror the minimalism of Upper House, which was designed by Hong Kong-born interiors expert Andre Fu; working with creamy marble floors and walls, cashmere furnishings and rotating contemporary art installations, Upper House is the epitome of Hong Kong cool and reservations at Cafe Gray Deluxe have to be made weeks in advance. 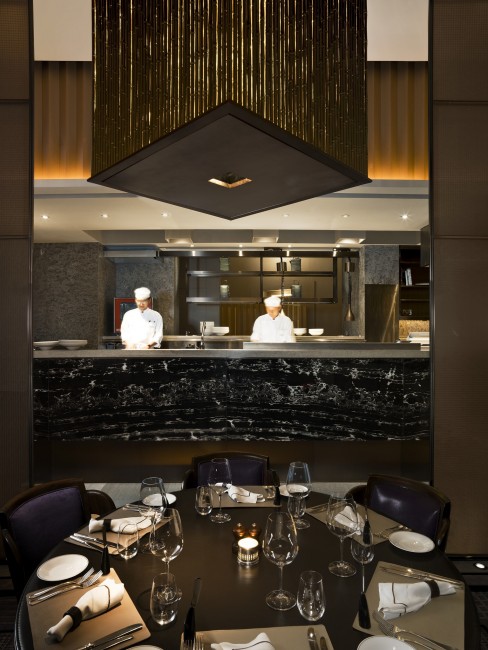 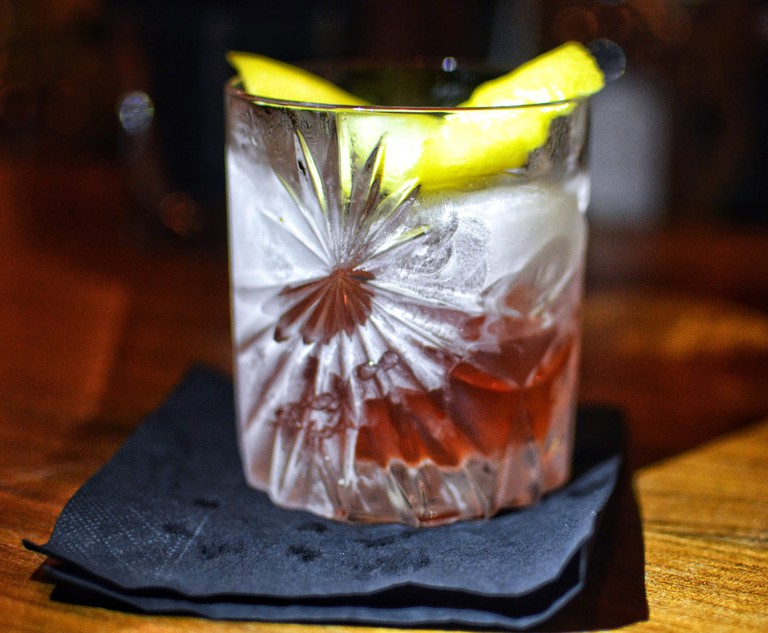 Inspired by the ‘great cities’ of the early 20th century – think Shanghai, Paris and London – Lily & Bloom aims to capture the excitement of urban street life. To this end, New York design firm AvroKO created a space that is urban, eclectic and a little bit gritty, but with a sophisticated edge. With tiled interior walls, wrought iron fixtures and decadent red leather banquette seating, the atmosphere is redolent of a Prohibition-era speakeasy. Don’t forget to check out the enormous steam punk chandeliers that dangle from one story to another across the open space. 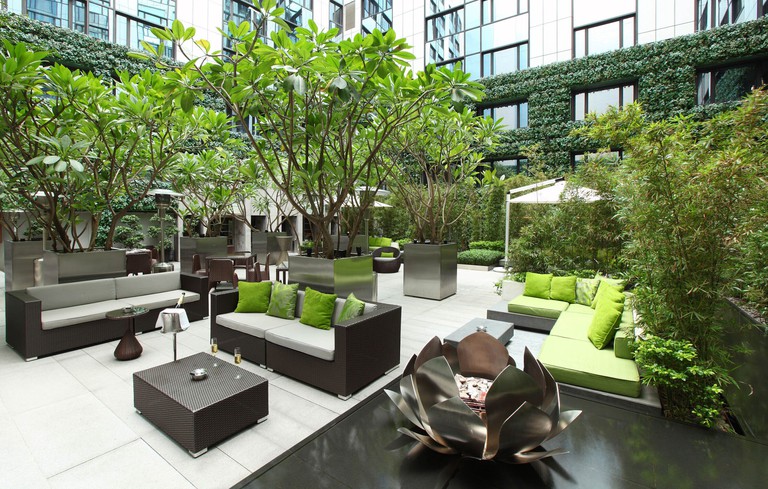 Courtesy of The Mira Hong Kong / Expedia
View Rooms
The Mira Hong Kong is a design destination in itself. Full of iconic features such as Arne Jacobsen Egg Chairs, the Tsim Sha Tsui venue has won accolades for its adventurous, youthful interiors, which are the handiwork of Miami designer Charles Allem. The hotel’s entrance hall is one of the city’s most striking modern spaces, with an undulating white-finned ceiling giving the effect of a space-age cathedral, while futuristic sculptures and lighting fittings augment the effect. The Mira’s various restaurants are similarly stylish, with Michelin-recommended ‘Cuisine Cuisine’ amplified by its incredible bauble chandelier – which fills the entire ceiling – and rooftop bar ‘Vibes’, with its bamboo groves, running waterways and blooming Frangipani trees.
EVERYTHING YOU NEED TO KNOW 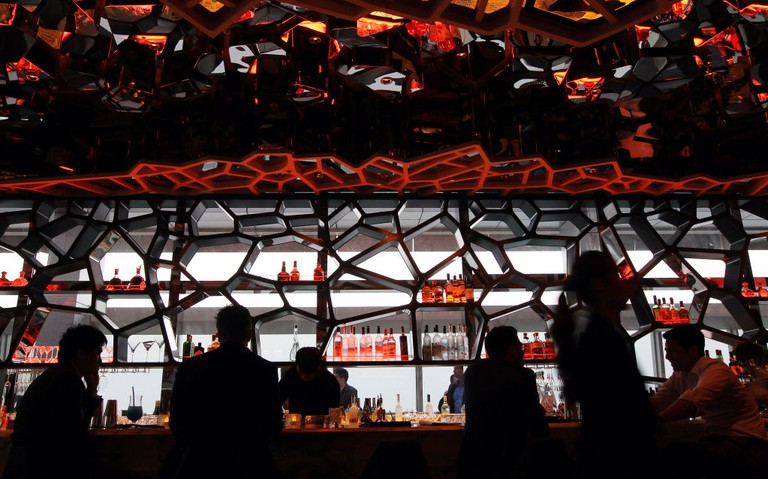 © South China Morning Post / Getty Images
The Ozone Bar is Asia’s highest bar. Perched on the 118th floor of the Ritz Carlton, Ozone’s design is even more breath-taking than its elevation. Japanese designer Masamichi Katayama surrendered the space to fantasy, creating an ‘edenic experiment – a man-made environment of nature in an imaginary world.’ Playing with organic forms such as honeycombs, spider webs and rock formations, Masamichi created a cavern-like space where diners are challenged by huge columns reminiscent of internal organs and marble fixtures that seem to have been barely quarried from the earth. The aim, says Masamichi, was to create ‘a place that is full of surprises and excitement at every turn.’
Open In Google Maps
International Commerce Centre (ICC), 1 Austin Road West, Tsim Sha Tsui, Kowloon, Hong Kong
+85222632270
Visit Website
Give us feedback

Bar, Restaurant, Chinese, $$$
Facebook
Email
Twitter
Pinterest
Copy link
Share
Map View
In a city that is constantly regenerating, sometimes at the expense of its architectural heritage, The Pawn is one of Hong Kong’s rare examples of a heritage building put to excellent use. A former pawnshop from the turn of the 19th century, the edifice now houses The Pawn, a restaurant and bar spanning three storeys with views over buzzing Wan Chai. Thanks to the design vision of local contemporary artist Stanley Wong, who works under the name anothermountainman, The Pawn boasts design features such as traditional Chinese shutters and neon signage, an integral part of Hong Kong’s aesthetic heritage. Even the wallpaper is visually arrested, having been designed by Tsang Kin-wah, one of the city’s best-known art practitioners. Although The Pawn recently underwent a large-scale interior overhaul, it remains true to its heritage and uses traditional Hong Kong design elements to stunning effect.
Open In Google Maps
Wan Chai, Hong Kong Island, Hong Kong
+85228663444
Visit Website
Give us feedback

Restaurant, Chinese, $$$
Facebook
Email
Twitter
Pinterest
Copy link
Share
Map View
This family-owned chiu chow restaurant has been a fixture on the Causeway Bay dining circuit for 45 years, but in 2013 the eatery was given a new lease of life thanks to a designer makeover by NC Design and Architecture. Playing fast and loose with perspective, the design team wrapped the space in 75 undulating bamboo strips running around the walls, disorientating distance and compressing width; the effect is similar to looking down the wrong end of a telescope, as the space lengthens before your eyes. With a 1960s-inspired colour scheme of olive, navy and gold, as well as a bamboo vaulted dining room, the interiors aim to reflect Pak Loh Chiu Chow’s traditional menu. The VIP Room allowed the design team to be particularly playful: located right in the middle of the public dining area, the bamboo-covered VIP space is contradictorily concealed in plain sight, offering diners tantalising glimpses of the exclusivity within.
Open In Google Maps
Tsim Sha Tsui, Kowloon, Hong Kong
+85236919168
Visit Website
Give us feedback
Give us feedback