He grew up in abject poverty; at just eight years old, he worked odd jobs until his fingers bled. But now, Hong Kong’s premiere jeweler, Wallace Chan handles some of the most expensive jewels in the world.

Originally from the Fujian Province, Chan has outgrown his humble beginnings. Since 2001, he is the creator of what The New York Times has called “playful, whimsical, even humorous” fine art pieces. But more than exquisite jewelry, people can expect “love and happiness,” from a piece of Wallace Chan jewelry. He says “each creation is my own child and my creations are praises of life.” Certainly, this is a man who appreciates the art of style.

One of the most intimate accessories – jewelry is worn next to often times bare skin – jewels can teach people about the inner mechanisms of their souls. Explains Chan over email, “Who are we? We are the past, the present and the future. The past and the present together create our future. I can not say my jewelry can teach people anything. I try to give each piece a story about our past and present–some meanings to be passed on to our future.”

Touched by the unique charm of gemstones, Chan is known for fusing a profound knowledge of metallurgy and gemology to become one with the stone, or as he puts it, to “enter” it. He explains, “I am fascinated by the colors, textures, crystal structures and symbolism of gemstones and particularly amazed by their interactions with light.” 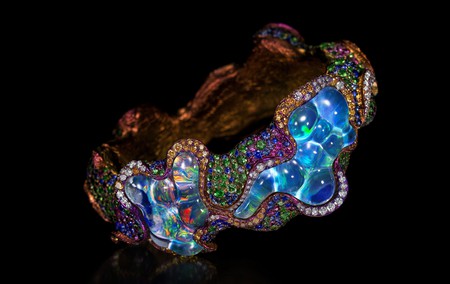 Culture Trip: What attracted you to work with gemstones in the first place?

Wallace Chan: My affinity with gemstones began when I was 16 years old. It was 1973. Coming from a poor family and not being able to receive a formal education I started working at a young age and soon realized that I had to acquire a skill to secure my future. My uncle was an ivory carver and he introduced me to work at a gemstone carver’s workshop. That was how the journey began. As a child who was curious about almost everything, I was attracted to gemstones. They inspired me and intrigued me. However, I left the workshop after nine months because I grew tired of repetitive, low-quality and profit-driven productions. I then started working on my own. At the beginning, I worked on malachite and jade, soon I moved on to crystal and topaz because they are transparent and allowed me to converse with light, and from there I continued my exploration, eventually getting my hands on all kinds of materials.

CT: How does one “enter the gemstone” and, as you’ve said previously, become one with it?

WC: A high level of concentration leads you into the worlds of others and that is how I enter the world of a gemstone. There is no gate to the path of enlightenment but love. When you love, nature returns you with love.

WC: Science and spirituality go hand in hand. Citing a simple example, the cutting, polishing and setting of a gemstone involve science, but the emotions, symbolic meanings and connotations it carries are all spiritual. The full potential of a gemstone can only be achieved when both science and spirituality work in unison. Science serves people to make life easy, smooth and efficient so to allow a greater spiritual pursuit than before.

In most cases, art has a strong focus on the spirituality, but it is my belief that science and technology open up for art a world of infinite possibilities. Take the use of metal in jewelry as an example. As metal plays an important role in jewelry, I spend a lot of time on metallurgical research and experiment in addition to artistic creation. After I read about the use of titanium in the medical field and aerospace technology in newspaper, I started to experiment with titanium and found a way to use it in jewelry making. Titanium is biocompatible, light but hard with a strong memory, making it a perfect companion for gemstones. The use of technology brings out the diverse colors in titanium, which also enriches the artistic nature of gemstones and jewelry design. 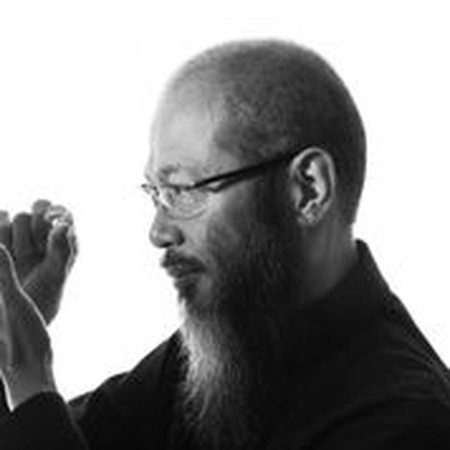 CT: How are gemstones graded?

WC: In general, the grading focuses on the color, clarity, cut and carat. Provenance is taken into consideration, too. But each kind of gemstone has a different set of standards. For example, there are different systems used for grading jade, sapphire and diamond. But to me, each piece of gemstone is beautiful in its own way, just like human beings. The market will always have certain trends, but it is also important that we take into account other values, such as emotional, cultural and historical implications.

CT: What are some of your favorite gemstones to work with and why?

WC: It is never easy to answer this question as I have many favorites; basically I love all kinds of stones. To create freely you must be free of all biases. But I particularly like gemstones with unusual characters as I am touched by their unique charm.

CT: Your work has taken you all over the world. What city has brought you the most inspiration, and why?

WC: I am constantly inspired no matter where I am but traveling does fire up my imagination. Many years ago, I travelled to Moscow for work. At that time I felt like I was traveling too much and I really missed my workshop–and then I saw the Kremlin. I thought to myself that if I were a fish swimming all the time, how nice it would be to carry a beautiful home with me wherever I go. So when I finally returned to my workshop I created a brooch named Fish’s Dream. On the fish’s ametrine belly, I carved the Kremlin using intaglio.

2016 has been a fruitful year. I travelled to Maastricht, London, and New York for exhibitions and talks. Each city has a different vibe. Maastricht is all about art–quiet, tranquil, slow-paced and historical. London is energetic with art, fashion and culture all in one. New York is a lot like Hong Kong, a fast-living city, but people there are so open and direct that from interacting with them at the events I was able to learn a lot about them in a short time. So for me, every city is inspirational.

CT: Can you define the “Wallace Cut” for our readers?

WC: The Wallace Cut is a gemstone carving technique I invented in 1987. This technique combines precise faceting and 360-degree intaglio to achieve 3-dimensional engraving. A hole is drilled into the back of a stone and then an image is carved. The image, when viewed from the front, will be reflected multiple times.

I came across a number of challenges during the invention process. One of the challenges is the lack of suitable tools. I had to work in a factory as an apprentice for six months in order to learn about the mechanics it took to invent the tools. I then modified a dental drill to meet my needs. Then came another challenge: the heat generated by the dental drill would crack the stone. My solution was to carve under water, which itself was not easy. I had to take the stone out of water after each carve to check it and dry it before I put it back under water to make another carve.

It took me two-and-a-half years to invent and perfect the Wallace Cut. I surrendered completely to the magic of light and shadow, and found great joy in it.

CT: You’ve said that jewelry is a carrier of heritage. Can you explain?

WC: Jewelry is one of the oldest forms of art in human history. From a piece of jewelry we can discover a lot of things, like why certain kinds of materials are more popular in a certain era, how technology and craftsmanship have evolved, influences of other cultures. [Jewelry also asks,] what is the connection between the current owner and the previous owners of a particular piece? When you examine a piece, you are listening to the stories it has to tell.

Let me use my creation “A Tale of Two Dragons”, a pair of brooches, as an example. 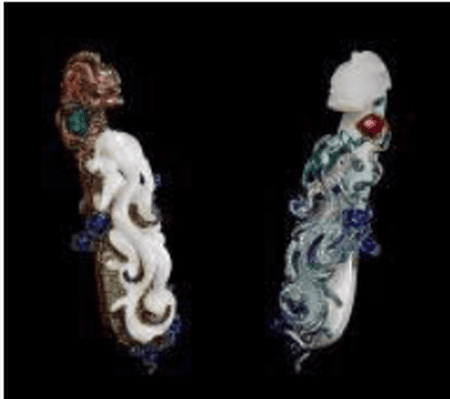 I sliced a piece of Qing dynasty (1736-1795) white jade dragon belt buckle into two halves and doubled the parts, mirroring the white jade dragon father and son with gemstones and titanium. The motif of this belt buckle depicts a dragon educating his son, which is one of the most popular motifs in China as most parents wish for their offsprings to be dragon-like. A belt buckle bearing this motif is often a gift from parent to son or from the old to the young.

In China, people started to make belt buckles out of metal or white jade as early as 221 BC. Royalties, scholars and swordsmen regarded the belt buckle as an essential accessory and a symbol of high social status. By the time of Ming and Qing dynasty (1368-1912), it became an art object for the royal and princely courts of China. Emperor Kangxi of the Qing dynasty once gave an inkstone depicting this dragon-educating-son motif to his son who later succeeded him and became Emperor.

When I saw the original white jade dragon belt buckle, I felt a sense of nostalgia. It was as if the white jade was waving at me and asking me to bring it home to breathe new life into it. And so I did. I turned it into a pair of brooches to pass on its history and the spirit of our times. 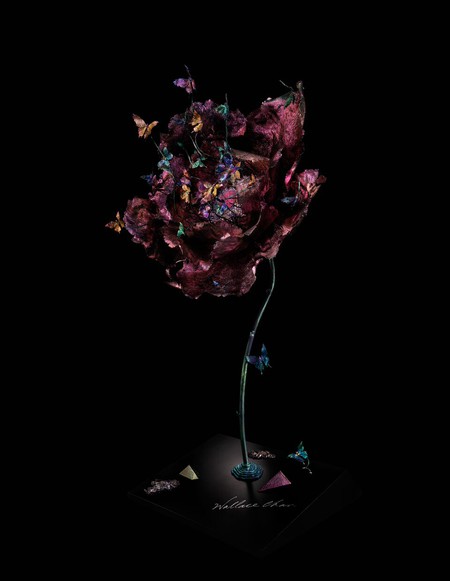 CT: Jewelry is an intimate purchase, as its worn directly on the body is most occasions. How can you tell if a gemstone works with your personal chemistry? 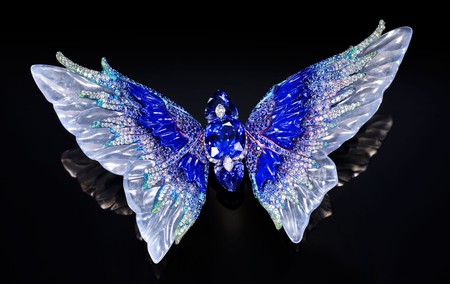 WC: The answer can be intuition—but in my opinion intuition is a result of experiences. Now I can make judgments quickly because I spent more than four decades gaining experiences. But very often a piece of jewelry is not simply about a single piece of gemstone. When you have a main stone, you need to look for its perfect companions. You need to try out various colors and textures in order to find the right balance and harmony. Since a piece of jewelry is made to be worn, it is extremely important for it to be ergonomically correct–a lot of it is about fighting against the gravity, finding a way around it and testing for the perfect proportion. A piece of jewelry has to be comfortable to wear or it fails.

CT: As you come from humble beginnings, can you describe what it was like to exhibit at Christie’s?

WC: I am grateful for each exhibition opportunity over the years, including TEFAF Maastricht, Masterpiece London, TEFAF New York, the Christie’s, and the Biennale des Antiquaires in Paris. It was a wonderful experience exhibiting at the Christie’s. The platform was prestigious and the audience was knowledgable about art. I was given a space where I could curate the exhibition as I liked with maximum amount of freedom. Besides the jewelry pieces, carvings and sculptures, I created my own showcases and lightings for the exhibition. It was also a non-commercial exhibition which I really appreciated.