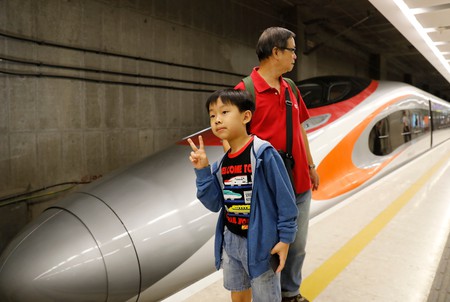 A new high-speed rail link between Hong Kong and mainland China will make it faster than ever to journey between the two, but the project has caused controversy among Hongkongers looking to protect the territory’s autonomy.

Hong Kong and mainland China just got a little closer. In September 2018, an Express Rail Link opened, providing a path from the former British colony to the southern Chinese city of Guangzhou in 40 minutes, less than half the time older trains take for the same journey. The trains will reach maximum speeds of 186 miles per hour (300 kilometers per hour) during the trip.

The project cost almost $11 billion – and was delivered several years late – but it’s a major attempt by the Chinese government to forge a powerful economic cluster of 11 cities in the south of the country. This new rail line will connect Hong Kong to the domestic high-speed network in China, making it much faster to reach cities like Shenzhen, the technology hub of the country, and the capital, Beijing.

China’s high-speed rail network has grown rapidly throughout the vast country since construction began back in 2008. Since then, 15,500 miles (25,000 kilometers) of track have been laid, and an estimated 4 million passengers commute on 4,000 bullet trains every day, according to numbers from China Railway.

The Chinese government is also building a bridge – set to become the world’s largest structure to cross a sea – that will connect Hong Kong to Zhuhai and Macau, the gambling epicenter of China. According to the Highways Department, the driving time between Zhuhai and the Hong Kong airport will be cut from four hours to 45 minutes.

This newest addition in Hong Kong comes with political baggage. The West Kowloon Station, built as part of the linkup to China, will include a joint checkpoint where Chinese officials will be able to enforce the law of the mainland on Hong Kong soil. 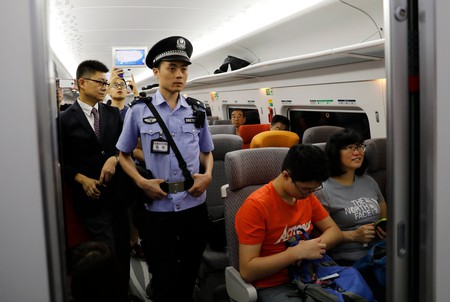 A Chinese police officer patrols a train during the first day of service of the Hong Kong Section of the Guangzhou-Shenzhen-Hong Kong Express Rail Link, in Hong Kong, China, 23 September 2018. | © Tyrone Siu/POOL/EPA-EFE/REX/Shutterstock

The United Kingdom handed Hong Kong back to China in 1997 in an agreement that left the territory with its own laws, protections for rights and freedoms and a stipulation that most laws of mainland China could not be applied to those living in Hong Kong. The territory’s semi-autonomy was guaranteed for 50 years.

The agreement surrounding the new rail link effectively means a strip of land in the middle of Hong Kong will be governed entirely under China’s laws. The Hong Kong Bar Association has opposed the move, and the new infrastructure has been described by more than one political commentator as a “Trojan train,” looking to subtly introduce mainland laws to the territory. Protests also took place outside the station during the opening ceremony in September.

Despite disagreements over the legality of the checkpoints at the station, local residents have expressed happiness at the convenience of the service in local press. China’s extensive network of high-speed rail was always intended to include Hong Kong, as the government attempts to make a giant country just a little smaller.