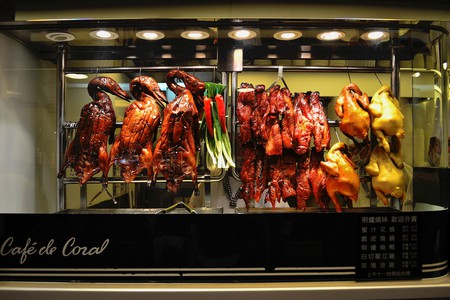 Hong Kong-style roasted meat — locally known as siu mei (燒味) — is a must-try for visitors to the city. The succulent, flavorful meats can be found in streetside shops all over the city as well as in upscale Chinese restaurants.

Siu mei shops are instantly recognizable by their window displays, which feature large slices of meat as well as whole chickens and ducks hanging from wires. Typically, the chef can be seen in the open kitchen, wielding a large butcher’s knife and chopping the meat to order. 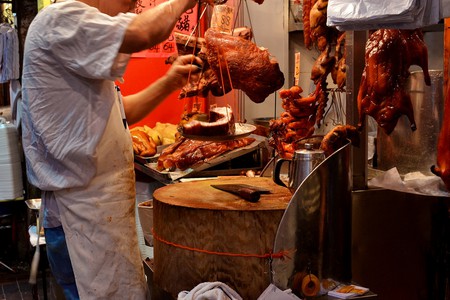 Each type of meat (pork, duck, goose, etc.) is served with its own distinct sauce. Typically, a box containing two types of siu mei over a bed of steaming hot rice and a side of veggies only costs around $25HKD, making it one of the cheapest meals that can be had in the city. Here are some of the common types of siu mei.

This is by far the most popular type of siu mei. Char siu consists of strips of boneless pork shoulder roasted over a spit. In the process, the strips of meat are coated in a sweet sauce consisting of soy sauce, fermented soybeans, garlic, hoisin sauce, and wine.

Good char siu tends to be incredibly tender, juicy, and fragrant. The sauce gives the meat its red hue, as well as its richly sweet and umami-laden flavor. 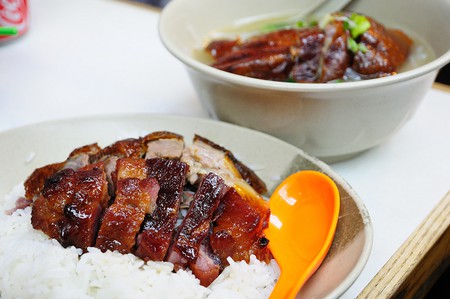 Siu yuk is roasted at high temperature until the skin is crispy and brittle. The meat is then cut into bite-sized cubes, to better let the diner enjoy the contrast between the crunchy skin and delicate, moist meat below. 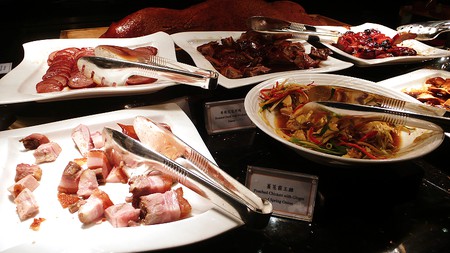 Roasted suckling pig is seen on restaurant banquet menus, not hole-in-the-wall siu mei restaurants. The pig in question is an unweaned piglet aged between two and six weeks old. The fanciest kinds are served whole (including the head), while the body is chopped into edible pieces. Suckling pig is distinctive for its incredibly light and crunchy skin, which falls away from the succulent meat as you bite into it. 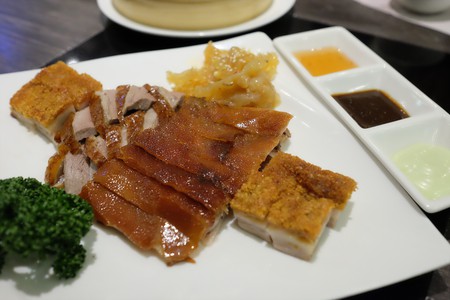 When preparing roasted goose or duck, the whole bird is stuffed (the mixture typically includes ginger, star anise, and five-spice powder) and then roasted inside a charcoal-fired stove. The resulting dish usually has a crispy skin with a bright sheen and juicy meat, and is served with plum sauce or a sweet and sour sauce. Duck is usually used as a cheaper substitute for goose. 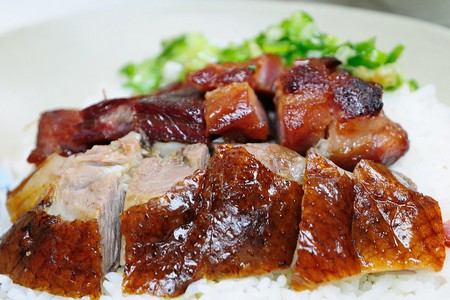 Both these dishes are steamed, not roasted, but are often still classified with siu mei because they tend to be sold alongside the other meats listed here. Soy sauce chicken is marinated in soy sauce beforehand, while steamed chicken or “white cut chicken” is unseasoned, and is typically served with a minced garlic and scallion sauce to bring a fresh edge to the meat.

Dennis Wong/CC BY 2.0/Wikimedia Commons
Give us feedback