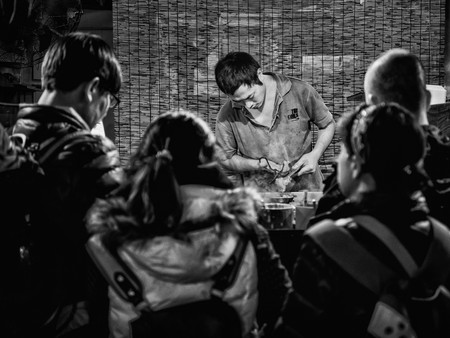 We bring you a two-part guide to the unique street food scene in Hong Kong. Roaming the streets and stumbling across the Dai Pai Dongs serving traditional Cantonese snacks is a favorite past time for locals and travelers alike. On sticks or in a polystyrene pot, stinky or sweet, these delicacies range from the traditional to the outrageously unusual; they are one of a kind, utterly delicious and there is something for everyone – adventurous or not. Venture through any of the main neighborhoods in Hong Kong and you’ll instantly come across street vendors selling these mouth-watering snacks. So, here’s part-one of our round-up of the dishes you have to try when in this exceptional metropolis and food heaven.

In the 1960s it is said that hawkers would shoulder two buckets of tofu pudding with a flat bamboo pole through the streets. As time went on, production of Dou Hau moved into factories to be sold primarily in tofu shops. This pudding can be served hot or cold and is usually accompanied with either syrup or brown sugar. If opting for the hot dish, many people recommend switching to the brown sugar topping as the sandy texture contrasts exquisitely with the smoothness of the tofu.

This candy used to be carted around by vendors in an iron trunk in the form of a monolithic candy rock. They would use a chisel and hammer to break the big ginger maltose into small pieces for each individual sale. The name of the candy is an onomatopoeic representation of the candy itself, as that was the sound the chiseling would make. With flavors of sesame and ginger, it has a unique taste (also very sweet) and a texture that is a cross between honeycomb and nougat.

Originally, this little pudding was made from a mixture of rice flour and brown sugar that was poured into an earthen bowl and steamed until cooked through. Now, cooks tend to use white rock or cane sugar instead. These would then be served to hungry locals on two sticks of bamboo skewers. Normally served at room temperature, it is now served in a bowl the size of your palm, or a little plastic bag, and has a lovely sweet flavor. You will find that red beans are sometimes added.

It is said that this dessert was created because of a mistake a chef once made while steaming a sponge cake. Though the authentic recipe calls for quite complicated cooking methods, it is still a much-loved dessert that is served in many places throughout Hong Kong. Made with white sugar and fermented rice milk, it is a refreshing spongy dessert consisting of three scrumptious layers of sweet, with the slightest hint of sourness from the fermentation process. Some of the more traditional restaurants still insist on grinding rice milk every day to make fresh cakes.

Originating in the 1950s, this dessert dominates the street food scene in Hong Kong. Made of sugar, flour, evaporated milk and egg, the batter is poured into a honeycomb griddle that is set on hot coals or an electrical heater, to bake into an egg-like waffle. This golden-colored dessert is tasty, crispy on the outside, soft on the inside and best served hot. They are often eaten plain, but you can also find various flavors such as strawberry, coconut, chocolate, green tea, peanut butter, black sesame, mango and more.

Also known as a Sugar Scallion Pizza, this is a traditional Cantonese snack in the form of a wrap with hard sugar inside a white wafer slice. It was especially famous in Hong Kong during the 1940s and 50s, and still is, for its sweet taste and crispy texture. Popular fillings include that of coconut, maltose and sesame. Although not as commonly seen anymore, you can still find this old sweet in some markets dotted around Hong Kong Island and on the Kowloon Peninsula.

These are real old-school style Cantonese snacks that resemble the Japanese mochi in appearance and texture. Historically, they were filled with a sweet paste or filling, and now it is possible to find every flavor you could possibly want, such as peanut, coconut and red bean. They’re chewy, sticky, soft and just sweet enough. They make a wonderful addition to any shopping spree if you’re feeling a little peckish, and are usually a Chinese New Year favorite for their symbolization of a sweet and close family or relationship.

Made from maltose sugar and two soda crackers, these used to be one of the most affordable snacks in the 50s and 60s – especially for school kids. The salty taste of the soda cracker, paired with the sweet flavor of the maltose, gave this snack a beautiful contrast of flavor and texture. Today, these simple and original crackers can only be found in the real traditional places of Hong Kong, but the sticky sweet maltose – rolled up on a thin strip of bamboo – is a dream for anyone with a sweet tooth.

Siu Mai has been a major staple in beloved dim sum restaurants in Hong Kong. It is a delicate dumpling that is usually filled with diced pork and prawns, and crab roe is often placed on top. You can also find other flavors such as beef and quail egg, but the pork and prawn is more commonly found. If buying from a street vendor, these dumplings are normally skewered and accompanied with soy sauce and hot chili oil (for those with a spicier disposition) – this is not quite like its dim sum sibling, but still just as popular on the streets.

Without a doubt, fish balls are certainly one of the most popular street food snacks of all. These emerged from the 1950s in Hong Kong, and in previous years was made with a fresh fish paste that the Aberdeen fishermen would catch and manually squash into a ball. Now, a lot of the fish paste is made from imported fish, as previous ingredients were deemed unfit. The fish balls are deep-fried, making them golden brown in color, crispy on the outside and elastic on the inside. It is then skewered up and paired with some homemade sauces supplied by the vendors. Some often opt to douse their snack in curry sauce (packs heat) or a broth (ideal for those who can’t hack the spice).