A Brief Introduction to Snake Wine 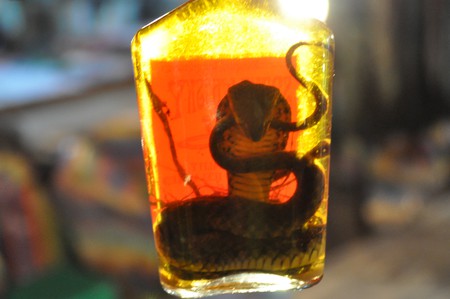 Among Hong Kong’s culinary offerings, snake wine is definitely one of the most unusual. Made from venomous snakes and alcoholic rice wine, Chinese snake wine has has been consumed since the Western Zhou dynasty (1046-771 BC) and is traditionally thought of as a medicinal liquor. Sought after only by the most adventuresome visitors, snake wine is something even most locals have never tried.

How is snake wine prepared?

Snake wine is a liquor that is prepared by putting an entire snake — sometimes while still alive — inside a jar of rice wine or some other kind of grain alcohol. It is then left to steep for several months. On occasion, herbs and spices such as ginseng are added to the formula.

An alternative form of the drink does not call for marinating the snake. Instead, a live snake is killed on the spot and its blood and bile are then mixed with alcohol, which is consumed immediately by the customer in the form of a shot. 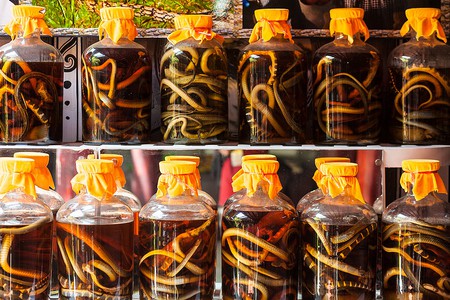 What are the health benefits associated with snake wine?

The different parts of a snake have long been thought to have various health benefits in traditional Chinese medicine. For instance, snake meat is thought to improve circulation and the skin, while the gall, bones, and snakeskin are thought to cure ailments such as sciatica, migraines, and rheumatism.

Snake venom, however, is the most valuable ingredient derived from the snake. Hailed as a ‘divine medicine’ during ancient times, it has been touted as a cure for ailments ranging from joint pain to hair loss to leprosy, and is also said to enhance sexual performance.

Modern studies have shown that snake wine has analgesic (painkilling) and anti-inflammatory properties, suggesting that it may indeed be good for certain ailments.

Is it safe to drink?

Yes. Although snake wine is made from venomous snakes, it is safe to drink because the ethanol in the rice wine denatures the snake’s venom.

However, those looking for snake wine in Hong Kong or China should avoid suspicious or unknown vendors, as well as homemade snake wine. Snakes are known to hibernate, and in rare cases may still be alive even after being steeped in wine for several months. In 2013, the story of a woman who was bitten by a snake that was still alive despite preserved in wine for three months was widely shared on the Internet.

The rice wine is a strong alcohol with an earthy, faintly sweet taste, while the snake’s presence brings a fishy or chicken-like flavor to it. Sometimes, the addition of extra herbs or spices will give the drink a medicinal flavor.

How is it served, and where can I find it around Hong Kong?

Snake wine is usually found in markets and traditional snake restaurants, and is usually served on its own in casual contexts, rather than as an accompaniment to a meal.

In Hong Kong, snake wine can be found at traditional snake restaurants, known as se wong, such as She Wong Lam in Sheung Wan or Sher Wong Fun in Central. These restaurants are typically family businesses with many decades of experience in procuring and handling venomous snakes. In addition to snake wine and snake bile shots, these restaurants also serve other snake-based delicacies such as snake soup, which is made from snake meat. 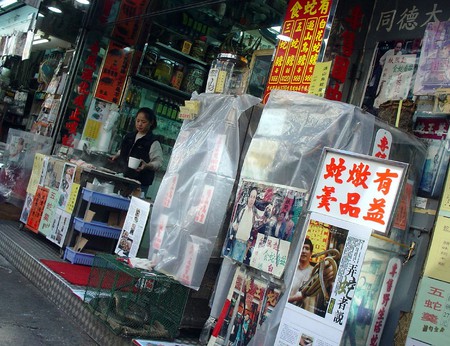