A Brief History Of The Chinese Junk 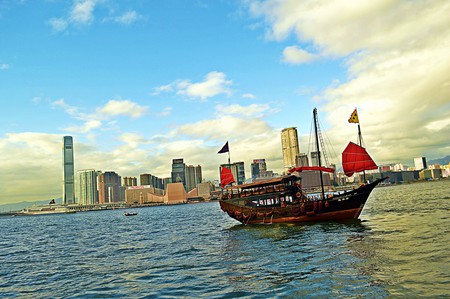 Crimson-masted junk ships are an iconic part of Hong Kong’s Victoria harbor, and have been used in China for fishing, trade, and war since at least the second century. Built from lightweight woods, with flat bottoms and bamboo-slatted masts, the junk epitomizes Chinese shipbuilding techniques. Read more about its origins below.

Junks first appeared in China during the Han Dynasty (206 BC – 220 AD), a small, shallow-hulled vessel with one or two masts. The boat’s narrow shape was designed to allow it to glide quickly across the water, while the flat bottom made it possible to dock in shallow waters.

The Chinese-style ships also featured ‘battened’ sails, meaning that they incorporated bamboo spines for stability. These spines served several purposes. First of all, it sectioned the sail, protecting small rips and tears from compromising the rest of the sail. Secondly, they were linked in such a way that sailors could adjust the sails from the deck, without having to endanger themselves by climbing up the mast.

The earliest sails were not made from canvas but from woven grass, which had to be dipped in tannins in order to be toughened up. This resulted in a reddish-brown hue, which was carried on when canvas masts were invented. The bright crimson masts seen in Hong Kong’s harbor today still bear this historical hallmark. 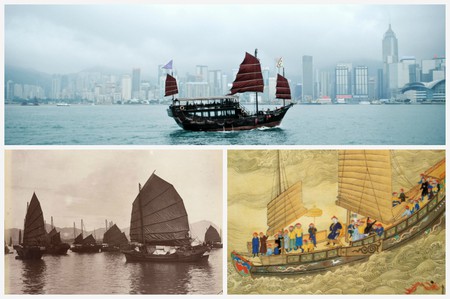 As time progressed, junks became larger and more masts were added. By the time the Song Dynasty (950-1276) rolled around, junks featured four masts and were essential to the nation’s trade and commerce.

In the Ming Dynasty (1368–1644), junks were incorporated into the army, giving rise to a formidable navy. This was the era of Admiral Zheng He, a legendary seafarer of the 15th century. Zheng He voyaged with the imperial Ming navy all the way to India, Arabia, and even as far as Africa’s Cape of Good Hope, trading in ivory and spices and establishing diplomatic ties with foreigners. At its peak, Zheng He’s armada had 30,000 sailors and over 300 ships, including the legendary nine-masted Treasure Ship. Measuring 400 ft. long and 150 ft. wide, it was the largest junk built in history.

While Zheng He’s expeditions were encouraged by the Yongle Emperor, his successor, the Hongxi Emperor, was less enthusiastic. Once he took the throne, the Hongxi Emperor cancelled maritime expeditions, burned down the fleet, decommissioned the imperial crew and put a stop to the shining era of Chinese navigation, a prohibition that would last for the next few hundred years.

However, Chinese shipbuilding prowess and techniques were preserved and carried on in the south of China, far away from the imperial capital, by humble fishermen and even pirates. Today, visitors to Hong Kong can catch a glimpse of the famous Aqua Luna, a handcrafted, historically authentic junk offering harbor cruises and onboard fine dining.