The former village of Ma Wan is a ghost town. Wandering around, you’ll find abandoned residences, crumbling schoolrooms and stilt houses slowly falling into the ocean. But just 30 years ago, Ma Wan was home to a thriving community of 2,000 people, most of whom made their living from fishing and farming. In 2011, the government evicted the inhabitants of Ma Wan from their homes. Here’s a brief history of this little-known village.

The 250-year old Ma Wan village is located on the small island of Ma Wan, off the northern coast of Lantau Island. The island has an area of less than one square kilometer, and lies in the shadow of Tsing Ma Bridge, which links Lantau Island to Tsing Yi. Legend has it that a treasure-filled junk belonging to the notorious pirate Cheung Po-Tsai lies at the bottom of Kap Shui Mun, the short channel between Lantau and Ma Wan. 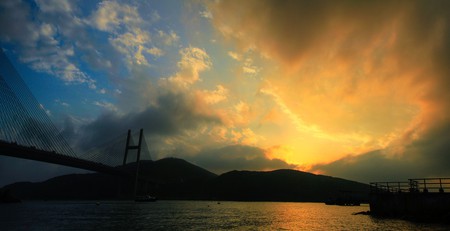 In the eighties, 2,000 people lived in Ma Wan village. It was home to one of Lantau’s stilt house (pang uk) communities, featuring houses built on wooden stilts above the island’s tidal flats. Like Tai O, Ma Wan was known for its seafood restaurants and delicious dried shrimp paste.

By 2000, the village population had dwindled to around 800. To the north, a luxury high-rise complex, Park Island, was developed by Sun Hung Kai Properties, a HK$12.5 billion project that was completed in 2006. The island is also home to the Noah’s Ark theme park, a pet project of Thomas Kwok, the evangelical chairman of Sun Hung Kai.

Working with the government, the developers of Park Island offered the villagers compensation packages, natives whose families had resided on the island for more than 99 years were offered new homes in New Ma Wan Village, a complex of three-storey villa houses near Park Island.

While some were happy with their new homes, other villagers were unhappy with the deal. In the abandoned village, you can still find old signs protesting the evictions.

In 2014, Thomas Kwok was accused of bribery and sentenced to jail in a high-profile case. During the trial, it was revealed Sun Hung Kai Properties had built Ma Wan Park as an excuse to evict the island’s indigenous population, paving the way for a luxury residential project.

In the 90s, an archaeological dig funded by Sun Hung Kai unearthed a 4,000-year-old burial site, consisting of human remains accompanied by a treasure trove of old artifacts, including pottery and jewelry. The remains date from the Middle and Late Neolithic to the early Bronze Age (2000 – 1000 BC), providing anthropologists with valuable information about the region’s earliest settlers.