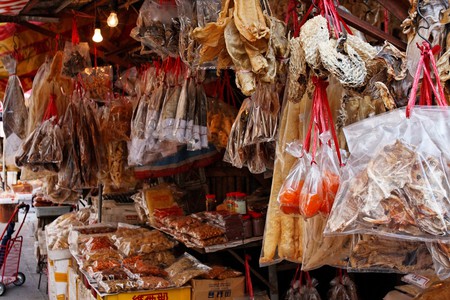 Long before Hong Kong became an Asian metropolis, it was a collection of small fishing villages. One traditional craft that has survived the transformation is the art of making dried shrimp paste. Known as haam ha cheung in Cantonese, dried shrimp paste is a pungent, salty condiment made from only two ingredients: ground shrimp meat and salt. Believed to have originated in Malaysia, shrimp paste was brought to Macau by the Portuguese in the 16th century, and from there, it spread across south China from there. 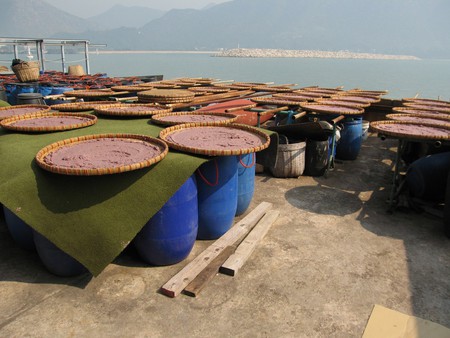 In the early to mid-20th century, Hong Kong’s shrimp paste became a prestigious product. Villages became famous for their dried shrimp factories, including Tai O, a Tanka fishing town on Lantau Island. However, as younger generations of villagers moved to urban areas, the shrimp paste business began to decline. Today, only a handful of shrimp paste factories remain, and they are in danger of disappearing altogether.

However, shrimp paste is only a small part of the story. If you want to experience Hong Kong’s dried seafood in all its variety, a trip to Des Voeux Road West in Sheung Wan — also known as “Dried Seafood Street” — is a must. Located in one of Hong Kong’s oldest districts, this unique and vibrant street is filled with hawkers selling dried seafood of all colors, shapes and smells.

The story of Des Voeux Road West begins in the early 20th century, when it was a market for salted fish caught from local waters. In those days, the street was lined with three- or four-storey residential buildings. The hawkers would live in those buildings, drying their wares on the rooftops and selling them on the ground floor. In the second half of the century, those buildings were slowly demolished to make way for high rises. The hawkers found themselves no longer able to dry fish on the rooftops, and switched from selling salted fish to dried seafood. 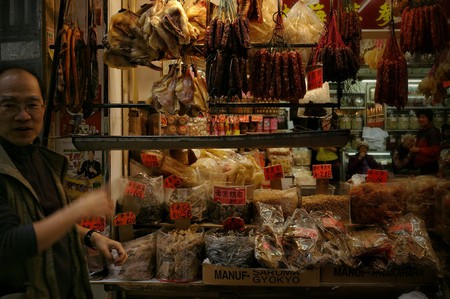 In the 1970s and 1980s, Hong Kong’s economy took off. Luxury seafood suddenly became more affordable, and soon enough, consumers were demanding premium abalone, fish maw and sea cucumbers imported from abroad. Nowadays, a dozen abalone on Des Voeux Road West can sell for as high as $10,000, while dried fish maw can go up to HK$60,000 per kilogram.

Premium dried seafood is particularly in demand during Chinese New Year, when Hongkongers habitually prepare large family banquets filled with all sorts of Cantonese delicacies. Some traditional seafood dishes are popular because they’re considered auspicious — for instance, black moss with dried oysters is ho see fat choy, which sounds like “good business and prosperity.” There’s also the much sought-after, a chewy sea snail that tastes like mushroom and resembles an ancient Chinese ingot, symbolizing wealth. One thing’s for sure: Hongkongers won’t be losing their taste for seafood anytime soon. 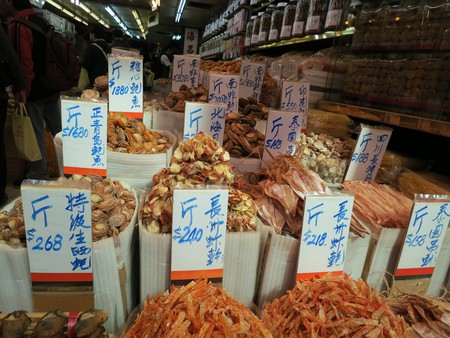 Dried seafood for sale | © Oleg Shpyrko/Flickr
Give us feedback