Superstitions That Still Shape the Lives of Hongkongers Today 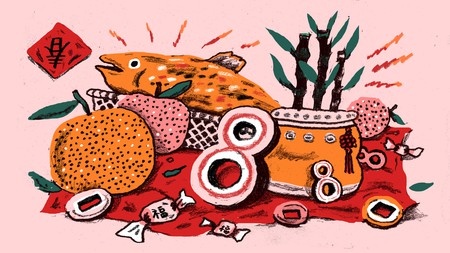 Hongkongers tend to have a healthy respect for superstition. From lucky numbers to feng shui, here are some of the city’s most common superstitions.

Why is a city like Hong Kong inclined to superstition? One theory suggests that because of the high-risk nature of jobs in the early years of Hong Kong’s rise as a financial powerhouse, many people would look for other ways to boost their odds of success, often drawing on traditional Chinese superstitions.

Red is considered a lucky colour in Chinese culture. While it’s strongly associated with Chinese New Year, birthdays and weddings – when it’s a tradition to wear red – many don red attire when they feel they need a little extra luck. This rule extends to underwear, which is good news for anyone wanting to attract good luck in a more subtle way. In fact, the best way to be lucky for the new year is to wear red underwear gifted by friends or family.

The Lunar New Year is the most important holiday in Hong Kong, and there are some crucial dos and don’ts that come along with it. On the first day, anything that involves cutting – such as having a haircut or clipping your nails – is a no-go if you want to have good luck in the year to come. Same for cleaning the house and washing hair, although many will still do the latter.

Dos are mostly associated with eating certain foods. Fish is popular as the word sounds like “surplus”, while round food items such as oranges, lotus candy and tangyuan, a dessert made from glutinous rice balls, all symbolise family unity. Flowers are also bought as their bloom represents imminent wealth, and different flowers have different meanings. For example, peach blossom is said to bring about luck in romance. In addition to lucky red, for Chinese New Year, it’s important to wear new clothes.

Hong Kongers believe certain things should never be given as gifts. Most items with this unfortunate reputation are scorned because the alliteration of their names has connotations with something bad, which in turn means they bear bad omens. Here are some gifts to avoid giving (or receiving):

Clocks: In Cantonese, “to give a clock” is pronounced “song zung”, a phrase that sounds the same as “to prepare for the end”, referring to the rites of paying one’s last respects to a loved one near the end of their life and burying them after they die. Clocks are also solemn reminders that time is running out.

Shoes: The pronunciation of shoes rhymes with “hai” and is considered to be unlucky and unharmonious because of the way it is pronounced.

Purse or wallet: This rule only applies to people you are not close to, as it insinuates you are giving your money away.

Sharp objects: Gifting knives and blades is frowned upon, because they are seen to represent a severing of relationships.

Pears: The word “pear” sounds similar to the word for “depart” or “leave”.

Four of anything: As explained below, “four” sounds like “death”, so anything that comes in a set of four is a no-no.

Green hats: In Chinese, to “wear a green hat” means “to be cuckolded”.

Feng shui is the Chinese architectural philosophy of organising your surroundings to attract good luck and ward off bad energy. Many superstitious locals decorate their homes with plants and position their furniture according to the principles of feng shui. In addition, many prominent buildings in Hong Kong incorporate feng shui elements. One example is the HSBC headquarters, designed by the renowned architecture studio Fosters + Partners. The escalators inside the building are set at an angle to the main entrance, to prevent evil spirits from entering. Two metal rods installed on top of the building also serve to deflect bad energy from the neighbouring Bank of China Building. In a nod to Chinese culture, the Walt Disney Company even consulted a feng shui expert when they built Hong Kong Disneyland. The theme park’s entrances and attractions are positioned to attract the flow of good qi (energy).

Dragons, the bearers of good fortune and prosperity, are believed to live in the mountains. In another feng shui-inspired architectural choice, many coastal buildings feature rectangular holes that function as passageways for their positive energy to pass through: dragon gates. Prominent buildings with dragon gates include the Repulse Bay residential and commercial arcade, and the Bel-Air Residence.

Spending a day at the races is among the most popular things to do in Hong Kong. Before the start of the horse racing season, the Hong Kong Jockey Club hosts a ritual ceremony called Bai Sun at the Sha Tin Racecourse. Joss sticks are burned, offerings of roast suckling pigs are laid out and prayers for a prosperous racing season are offered to the gods.

The same goes for Hong Kong’s TV and film industries. Before filming begins, a Bai Sun ceremony is often held to attract luck and prosperity. The same goes for many new shops before they open for business, both to pay respect to the gods and to boost chances of success for the new venture.

Tudigong shrines in buildings and homes

If you look closely in older neighbourhoods, at the entrance to many buildings you will find a small red plaque and an accompanying pot in which to place joss sticks. This is a doorway spirit tablet – a ritual object dedicated to deities – for Tudigong, the Lord of the Soil and the Ground, who is believed to safeguard and bless the people living on his grounds. Some homes even have their very own Tudigong spirit tablet, or statues of other deities.

It is believed that during the 7th lunar month ghosts come out from the lower realm – the spirit world – and are free to roam the mortal world. During Ghost Month many people avoid renovations in order not to disturb any temporary spirit visitors to the house. The apex of the Ghost Month, The Hungry Ghost Festival, takes place on the fifteenth day, when the gates of the afterlife open. On this day, many pay respects at the graves of their ancestors and make roadside offerings to the ghosts who have not crossed over.

Avoidance of the number four

In Cantonese, the word for “four” sounds similar to the word for “death”, so Hongkongers avoid the number at all costs. In many buildings, floor numbers which include the number are skipped. People avoid gifting things in sets of four, and even prefer phone numbers without the digit four.

Conversely, the number eight is considered auspicious because the word “eight” sounds similar to the word “prosper” – pronounced “faa”. That’s why people prefer addresses and telephone numbers that include the number eight, which can be sold at a much higher price by vendors. Around Chinese New Year, seasonal goods even bear prices featuring the number eight.

In 2016, a car license plate bearing the number 28 was auctioned for a record HK$18.1 million (US$2.3 million), because the numbers “two” and “eight” together sound like “easy fortune” in Cantonese.