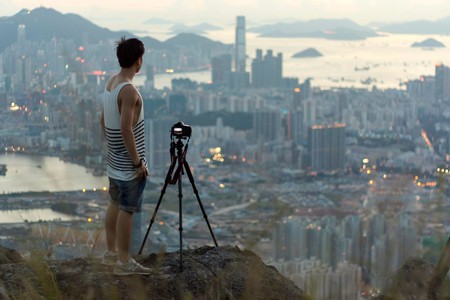 With their eye for a fresh angle and unique perspective, these ten Hong Kong photographers have successfully managed to capture the attention of fans and media the world over. Their striking images offer a chance to view Hong Kong like you’ve never seen it before. 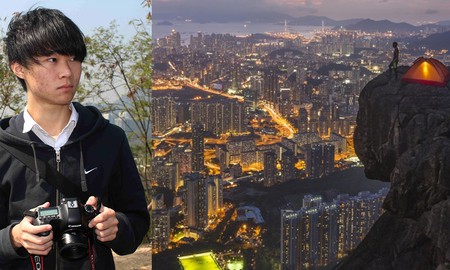 20-year-old Kelvin Yuen was still a student at Hong Kong Baptist University when one of his photographs won a National Geographic Contest. Not only was it a huge achievement for someone his age, but even more staggering was that he had only picked up a camera 18 months prior. His winning shot was taken of Kowloon Peak, a 602-metre tall mountain in one of Hong Kong’s country parks, which is close to where he lives. It shows a tent on the cliff edge and is said to represent the close relationship between Hong Kong and nature. His panache for landscape photography has since caught the eye of the Hong Kong Tourism Board, which uses his services as a photography consultant. If one thing is clear, through his lens, Hong Kong has never looked more awe-inspiring. Check out Kelvin’s award-winning shots by following him @kelvin_yuen_. 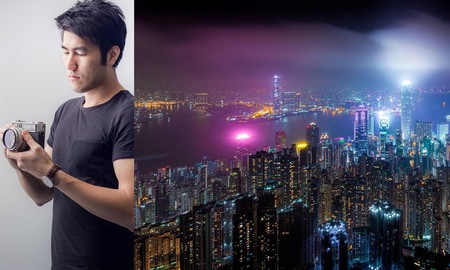 Born and raised in Hong Kong, photographer Andy Yeung has won international recognition for his work by focusing on new and artistic ways to capture this often over-photographed city. Having first picked up a camera in 2005, Andy has an amazing eye for landscape, architecture and aerial photography that showcase unique perspectives. He took an interest in aerial photography two years ago, and his recent series of drone shots entitled ‘Urban Jungle’ shows the stunning density of Hong Kong’s tightly-packed residential towers, which are some of the tallest in the world. His work has been featured by leading media sites such as BBC, CNN and DJI. In 2016, his 360-degree photos of Hong Kong went viral on social media, amassing tens of thousands of shares. He sure knows how to capture Hong Kong from its best angles. See for yourself by following Andy @yeungshingfuk. 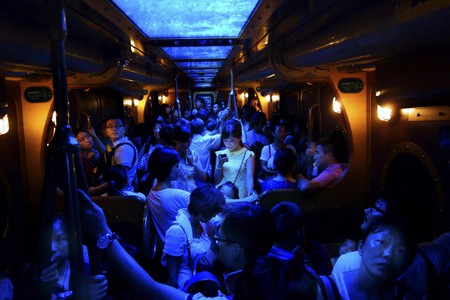 Hong Kong-based Brian Yen began taking photos as a teenager, but it wasn’t until years later, in 2014, that a photo he took on a day out with his daughter at one of Hong Kong’s main family attractions ended up scooping the grand prize at National Geographic’s Photo Contest. He considers photography an art, not a vocation, and he openly shares his photographs on his public Flickr stream whilst keeping a relatively low profile. These days, he switches between his Canon 1Ds Mark III or a Sony RX100 Mark III, but even uses his camera on his iPhone to capture his award-winning shots. He photographs multiple subjects from architecture and landscapes to people and animals. His series ‘One Year in Hong Kong’ captures the truly busy nature of a populated metropolis through his series of long exposure photography. 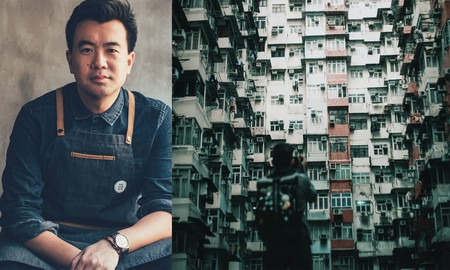 Leading the way for the social media photography boom, Justin Lim has been featured by Instagram as a ‘Suggested User’ and has seen his work featured on the BBC and in The Guardian, among other international media. His particular focus is lifestyle photography that encompasses his love for capturing weddings and family moments. But not limited to these, he’s branched out and collaborated with numerous brands on their social media branding and visual identity, including the likes of Omega, MR PORTER and others. In 2016, he was even a guest photographer on Austria’s Next Topmodel. Educated in England, Justin trained as a lawyer, but after moving back to his native Hong Kong in 2003, he was able to leave his law firm a few years ago and make a full-time career of his photography passion. He also runs his own multi-purpose space, The Kandid. Follow Justin Lim @hurtingbombz. 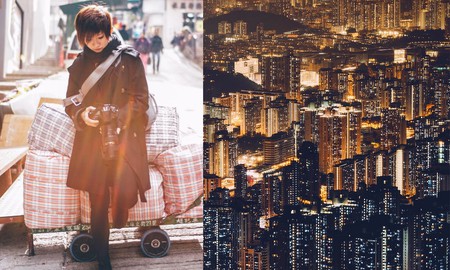 It’s little wonder that architect Vivien Liu would develop a passion for photographing the striking architecture of Hong Kong. Since first uploading her photography to Instagram four years ago, Vivien has attracted more than 200,000 followers who check back daily to see her unique view on Hong Kong through her powerful images. In addition to shooting her favourite architecture, her work has broadened to include portraiture, natural landscapes, and product photography. She’s worked for clients including Jack Daniels, American Express, Sony, and The Hong Kong Tourism Board. Today she is the founder of her own studio, the Hong Kong based Studio UNIT, which combines her three passions for architecture, interior design, and photography. Follow Vivien Liu @vdubl. 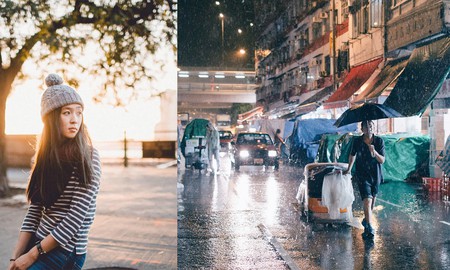 Elaine Li is the perfect example of someone who has been able to utilise the power of social media to turn a passion for photography into a bonafide career. One look at her captivating shots of Hong Kong and it’s easy to see why she’s amassed more than 180,000 followers on Instagram. Her in-demand photography skills have been sought after by leading brands such as Nike, Cartier, The North Face and DJI as well as various tourism boards including Singapore, Barcelona and Finland. Born and raised in Hong Kong, today Elaine juggles her time between being a senior art director for an advertising agency whilst photographing for different brands. In addition, she’s a regular at public speaking events, giving her tips on being a social influencer. Follow Elaine Li @lielaine. 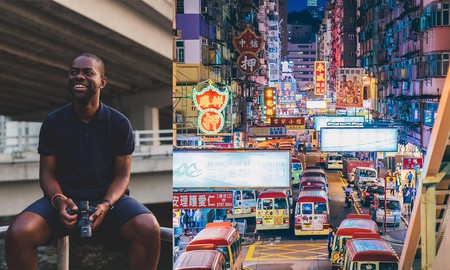 Originally from London, Edward Barnieh’s popularity as a photographer accelerated tenfold when he moved to Hong Kong. He started uploading his jaw-dropping images of the city’s densely packed buildings and vibrant skyline to Instagram, and followers soon swarmed his account. Now, with close to 200,000 followers, his talent and knack for shooting the city in the right light continues to draw attention. He juggles his career as an animator with his passion for photography and specialises in travel, landscapes and portraits. His skills behind the camera have also been employed by brands such as Nike, Leica, UBS and Volkswagen. Follow Edward Barnieh @edwardkb. 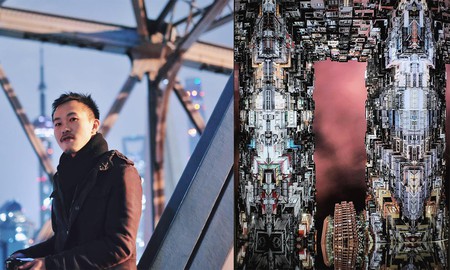 Kevin Mak is an international architect and photographer who has an eye for finding the beauty in the everyday hustle and bustle of city living. He describes his style as ‘urban, spatial, and narrative’. He likes taking the storyline of a lonely traveler in a metropolis struggling to find moments of hope and enlightenment, which he’s been able to capture to great effect if his Instagram feed is anything to judge by. These days, he’s been able to meld his passions for architecture, travel and photography into one and, in addition to acquiring legions of followers on Instagram, is now a contributing photographer for Getty Images. Follow Kevin Mak @kingymak. 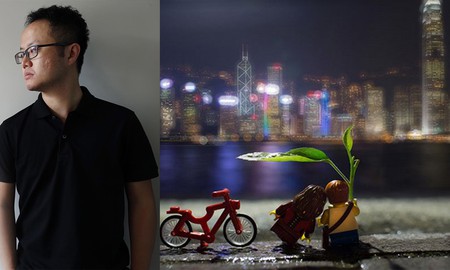 Hong Kong photographer Ric Tse fuses his love of the city’s urban backdrops and his fascination with Lego to come up with his own unique strand of photography titled ‘Legography’. He photographs various recognisable scenes from around Hong Kong and then interprets these scenes by integrating Lego figures. A property manager by day, Ric began photographing Lego as a hobby in 2009. His recent photography series titled ‘Batman Save The City’ depicts a Lego Batman coming to the rescue in a range of different scenarios and was tied to the release of the recent Lego Batman movie earlier this year. His work has won him numerous local photography competitions. He aims to capture the essence of Hong Kong, but also inject a certain amount of local humour and fun into the photographs. To see more of Ric’s ‘Legography’, visit his Facebook page.

Some may call him crazy, but it’s Daniel Lau’s brand of daredevil photography from atop some of Hong Kong’s tallest skyscrapers that has won him an army of followers and drawn international attention. Together with his crew, collectively called Esthetics, their aim is to uncover the city’s most unknown and unappreciated areas to get a different angle on the city. Notably in 2014, together with two friends, he scaled one of Hong Kong’s highest buildings and filmed a group selfie where they were seen munching on bananas. The selfie quickly went viral (over three million views on YouTube), and the New York Daily dubbed it the ‘world’s scariest selfie’. Aside from the daredevil stunts, Daniel has a genuine love of photography and of capturing the city from unique angles, to which his Instagram account is a testament. Follow Daniel Lau @daniel__lau.