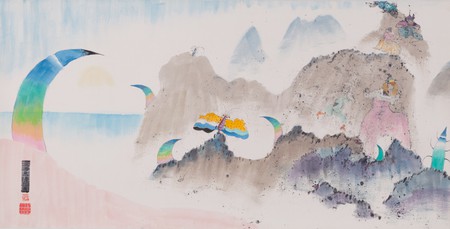 Hong Kong is home to a dynamic contemporary art community that is constantly evolving and pushing boundaries. Here are some of the most important and exciting figures in the Hong Kong art scene today, including established artists who wield tremendous influence, as well as exciting new faces who have recently come to international attention.

Known for his innovative use of text and language, and for his somber interrogations of religion, sexuality, philosophy, and humanity, Tsang Kin-Wah (b. 1976) first rose to prominence in 2005 with “Pattern Paintings,” wall paintings of elegant floral patterns that, on closer inspection, revealed themselves to be an arrangement of expletives written in English and Chinese. His later works are more immersive, involving projections, dynamic text, and video footage. He represented Hong Kong at the 56th Venice Biennale in 2015 with his solo exhibition The Infinite Nothing, a series of video installations that drew inspiration from the existential philosophy of Friedrich Nietzsche. Tsang has also been featured at the Guggenheim Museum in New York, the Mori Art Museum in Tokyo, and the M+ Pavilion in Hong Kong.

Kwok Mang Ho (b. 1947), or Frog King, is one of Hong Kong’s most enigmatic and eccentric artists. When he appears in public, he’s usually donning his Frog King costume — a bulky hat and robe that makes him look like a shaman, with a pair of unforgettable sunglasses that resemble a pair of googly cartoon frog eyes. The Frog King’s persona is a central part of his work, as his performances, graffiti, sculptures, videos, and paintings almost always incorporate his signature frog theme. A pioneering figure in Hong Kong’s performance and conceptual art scene, his work is unfailingly playful and provocative. He’s incorporated objects like plastic bags and rotten eggs into his installations, and used toilet paper, kites, and coffee filters as his canvas. He’s also considered China’s first performance artist, beginning with Plastic Bag Performance in 1979, where he tied plastic bags to iconic Chinese landmarks — namely, Tiananmen Square and the Great Wall.

Luis Chan (1905-1995), known as the “King of Watercolor,” was a superbly gifted painter despite having received no formal training in art, and one of the pioneers of modern art in Hong Kong. He began his career by making realist watercolor landscapes in the 1930s and ’40s. In the ’50s and ’60s, he was heavily influenced by the Surrealist automatist method, and began to create fantastical, dreamlike scenarios that blended Chinese and Western painting styles. In the ’80s, he moved on to abstract paintings, which made use of large canvases and bright splashes of paint. His works can be described as colorful, imaginative, and at times kaleidoscopic or even psychedelic. He was also chairman of the Hong Kong Art Society and wrote many books on painting and art.

Rosanna Li is a ceramicist and sculptor whose works have graced many public spaces in Hong Kong. Her trademark human figurines are comically plump, with rounded limbs, large shapeless feet, thick necks, and contented expressions. Ranging from larger-than-life sculptures to miniature figurines, Li’s charming creations are intentionally at odds with society’s concept of the ideal human figure, questioning conventional wisdom and mainstream culture. Li has used her sculptures to challenge gender stereotypes and sexist norms embedded in the Chinese language — for instance, her “Men and Women ‧ This and That” series plays with gender norms and creates pictorial representations of invented Chinese characters. Li is also a retired professor of design at Hong Kong Polytechnic University. 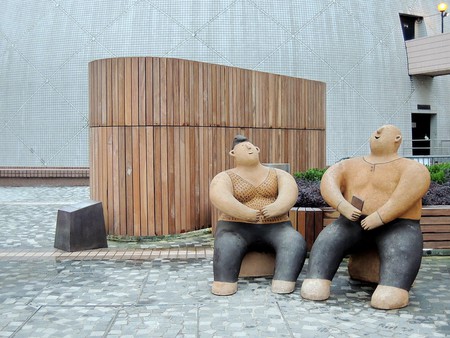 Sim Chan (b. 1987) is an exciting emerging artist whose work is intensely connected to Hong Kong’s urban architecture. He was named one of “40 Under 40” rising Asian talent by Perspective Magazine in 2013 and a finalist for the Sovereign Asian Art Prize in 2011 and 2013. Chan is fascinated by modern city life and society, and the cityscape as a habitat. His “SimSky” series, a series of oil paintings on handmade, irregularly-shaped wooden frames, depicts the sky viewed from the ground up. Each patch of sky is constrained by apartment blocks through a series of rectangular shapes, making the sky seem immeasurably distant and unattainable. He is also known for “Sim City,” a series of oil paintings depicting an imaginary metropolis through a web of geometric shapes. Chan’s work has been exhibited in Hong Kong, Shanghai, Beijing, Tokyo, Zurich, London and elsewhere. 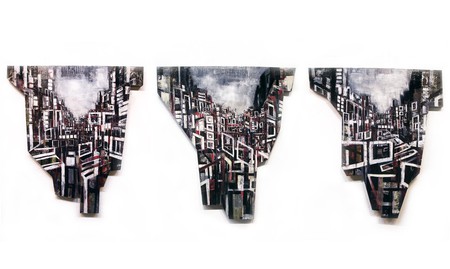 SimSky Series by Sim Chan | Image courtesy of the artist

Kingsley Ng (b. 1980) is an interdisciplinary artist who works with a variety of media, manipulating light, sound, and space through technological gadgets, such as cameras, gramophones, and record players. His 2011 work Solitary Light features projected digitally altered footage of fireflies on a silhouette of the Hong Kong skyline, juxtaposing the cityscape with its natural ecology. At the 2017 edition of Art Basel Hong Kong, Ng presented Twenty Five Minutes Older, an immersive installation that took place on a moving tram. The tram was converted into a moving camera obscura, offering upside-down images of the passing city along with projected text and spoken extracts. Ng won the Best Artist Award (Media Art) by the Hong Kong Arts Development Council in 2014, and was a recipient of the Asian Cultural Council Fellowship in New York in 2013. He teaches at Hong Kong Baptist University.

Intensely political and deeply vested in the concept of Hong Kong identity, Chow Chun Fai (b. 1980) worked as a taxi driver while he obtained a BA and MFA in Fine Arts from the Chinese University of Hong Kong. His first paintings depicted scenes of Hong Kong, drawn from his journeys as a taxi driver. In 2006, he began his “Painting on Movie” series, each of which consists of a painted still from Hong Kong films, especially New Wave films of the ’70s and ’80s. Each still features prominent dual Chinese and English subtitles, which are deliberately chosen to reflect political and social tensions. “I want my identity back,” says a character in one painting. “I can’t claim to be a real Chinese,” says a character in another. The power of the “Painting on Movie” works is their ability to transform the meaning of dialogue written two or three decades ago, transplanting them into the modern age in order respond the issues of the present. Chow was the recipient of the Sovereign Asian Art Prize in 2008. 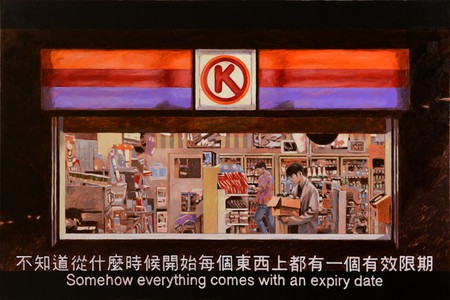 Nancy Chu Woo’s (b. 1942) impressionistic paintings of nudes, landscapes, fruits, and vegetables are full of sensuous grace, saturated with multiple layers of contrasting colors. Born in mainland China and raised in Hong Kong, Chu studied in the United States. She worked as an artist in New York for 14 years before returning to Hong Kong in 1973. Instead of using realistic colors, Chu often brings colors that only exist in her head to the canvas to express certain emotions and movements. She is also known for combining Western art styles with Chinese calligraphy and painting techniques, including Chinese painting materials, such as xuan paper. Chu’s work has exhibited across China, Europe, the United States, and Canada. 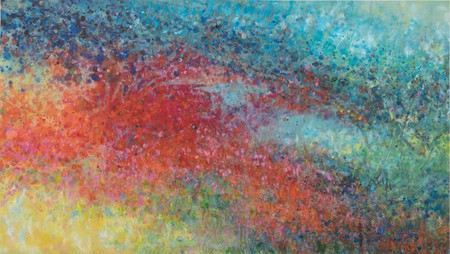 Leung Mee Ping (b. 1961) is an award-winning artist whose paintings, installations, and mixed-media artwork investigates issues of globalism, identity, race, ethics and consumerism. In her 2002 installation Memorize the Future, Leung braided thousands of children’s shoes by hand out of human hair. More recently, her 2014 “Made in Hong Kong” series featured kitschy souvenir paintings commissioned by Leung and produced by a workshop in Shenzhen. The touristy, Hong Kong-themed paintings explores the changing landscape of Chinese tourism and consumerism, and also addresses issues of authorship and authenticity. 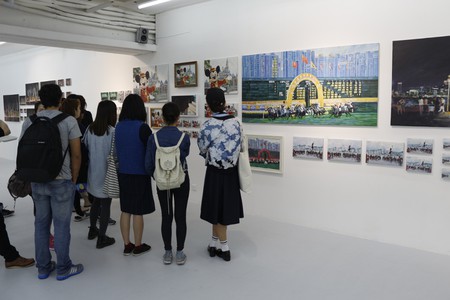 Stanley Wong (b. 1960), also known as anothermountainman, is a prominent Hong Kong artist, photographer and graphic designer who is best known for his “red-white-blue” themed artwork and installations, which he presented at the 51st Venice Biennale in 2005. The series is inspired by the red, white, and blue striped canvas bags that are ubiquitous in Hong Kong, especially among the older and working-class population. The bags are usually thought of as cheap and unfashionable, but Wong ingeniously transformed the pattern into a symbol of Hong Kong’s industrious spirit. Soon after, the red-white-blue motif became a symbol of Hong Kong identity, and has since been picked up and imitated by other designers to evoke local pride.