The world’s longest glass bridge opened in China to visitors at the end of 2017. For added effect, the Hongyagu glass suspension bridge, ‘sways a little’ to keep visitors ‘entertained’.

The bridge measures 488 metres across (1,600 feet) and links two peaks in the mountainous region of northeastern China, Hebei province. If walking across a glass bridge 218 metres (715 feet) above ground isn’t daunting enough, the bridge has been designed to ‘sway a little’ to entertain visitors.

The record-breaking bridge took three years to construct and is 191 feet longer than the previous record holder, which is also in China.

While designed to accommodate up to 2,000 people, due to safety precautions, only 500 to 600 visitors will be allowed to walk on the bridge at the same time.

Last year, the glass-bottomed bridge in Zhangjiajie Grand Canyon (the world’s second longest glass bridge) was forced to close just days after it opened due to an overwhelming number of tourists, causing safety concerns.

The bridge is four meters wide (13 feet) and made of 1,077 glass panels that are four centimeters thick (almost 1.6 inches) and the entire bridge weighs a colossal 70 tonnes.

Yang Minghua, the chairman of Hebei’s Bailu Group, which built the bridge, told local media that the bridge has the greatest transparency and is the most “spectacular pedestrian glass suspension bridge.”

For visitors brave enough to walk across it, they must wear specially provided “shoe gloves” to protect the glass surface – a necessary precaution given other bridges suffered shattered glass panels not long after opening.

Hebei Bailu Group hopes that the bridge’s greatest draw will be its ‘swaying sensation’. They told local reporters that they hoped the swinging motion could entertain the visitors as they take in the breathtaking scenery.

Glass-bottomed bridges have become increasingly popular in China with several built across the country. Though none of them are for the feint-hearted. 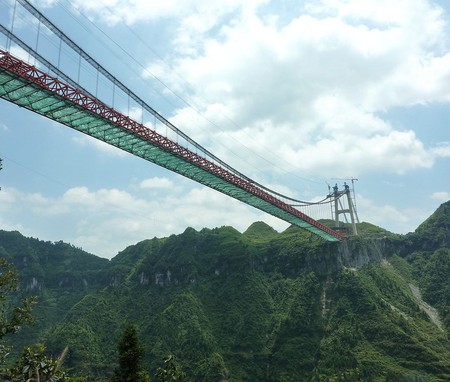 Just days before the world’s longest glass-bottomed bridge opened in Hongyagu, another glass bridge called ‘Flying-dragon Glass Bridge’ opened in the mountains of Wuhu. Measuring 1,272 feet in length, this one boasts its own special effects too.

This time, while not designed to sway, the 124 glass panels on the bridge appear to shatter when the tourists step on them. In addition, two dragon statues on top of the 590-foot-high bridge can produce smoke, which makes the mythological creatures appear as though they are flying through the clouds.