Why Do the Chinese Burn Fake Money at Funerals? 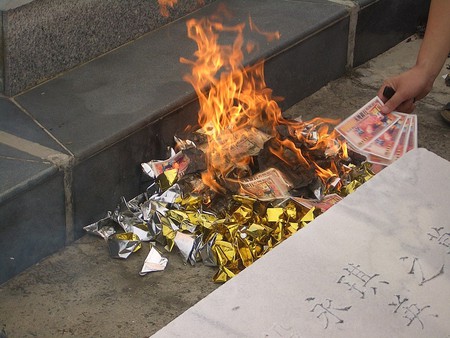 According to Chinese folklore, money can buy you happiness in the afterlife. That’s the age-old belief behind the tradition of Chinese mourners burning fake money at funerals – they want to ensure that their ancestors are literally dead rich.

Chinese mourners have been burning joss paper – known as “ghost money” – for centuries. This is largely due to a folk belief in China that if you burn paper money and make offerings at the graves of your ancestors, the deceased will receive them and benefit from a happy and prosperous afterlife.

Where does this practice originate from?

The ritual of burning ghost money to venerate the deceased is believed to have a history dating back around 2,500 years. It’s derived from a mix of Taoism, Buddhism and regional folklore. Mourners believe that burning paper money will enable their deceased family members to have all they will need in the afterlife.

The practice is often seen on the annual tomb-sweeping day in early April known as Qingming Festival. On this day, millions of Chinese people visit the graves of their ancestors to burn paper money as an offering. 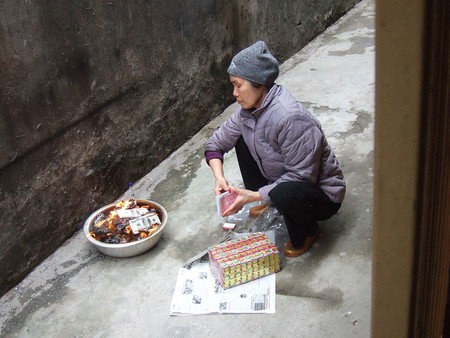 Why do they burn fake money?

The fake money is burnt mostly for the purpose of enabling their deceased family members to purchase luxuries and necessities needed for a comfortable afterlife. The money is believed to be deposited in an afterlife bank of sorts, from which the deceased spirits can make withdrawals.

It’s also a form of ancestor worship based on the belief that the spirits of the dead continue to dwell in the natural world and have the power to influence the fortune and fate of the living. Therefore, the money is an offering to keep their ancestors happy in return for blessings.

Mourners will fold the paper as an important part of the burning ceremony, as it distinguishes joss paper from actual money. Of course, burning real money is deemed unacceptable and is considered unlucky in most Asian cultures. The three types of ghost money are copper (for newly deceased spirits and spirits of the unknown), gold (for the deceased and the higher gods), and silver (for ancestral spirits and local deities) – all of which are made of joss paper. 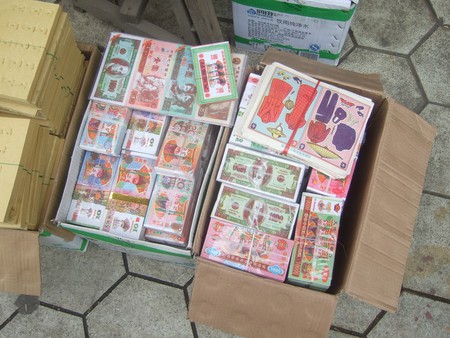 Where is this tradition practiced?

The tradition is practiced wherever there are Chinese communities – mainland China, Hong Kong, Taiwan, Singapore, etc.

What else is burnt for the deceased?

In addition to the paper money, some mourners go as far as offering paper replicas of houses, servants, garments, passports, flight tickets, rice cookers and even the latest gadgets like smartphones and TVs. Such items are burned to symbolically provide the deceased with a place to live, clothing to wear and people to take care of them in the afterlife. No luxuries are denied to the deceased.