Who Is Grace Chen? Five Things to Know About China's Power Dresser 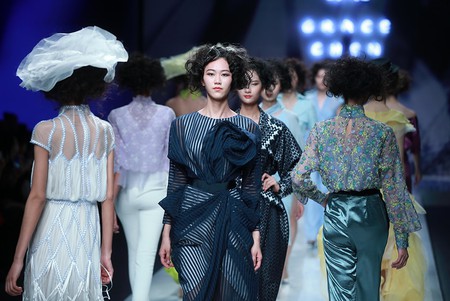 As Chinese shoppers show an increased interest in luxury fashion, the nation’s own designers are moving into the spotlight. Power dresser and couture designer Grace Chen is the latest Chinese designer to bring her home country’s luxury fashion to a wide cultural audience. Here are five things to know about Chen as she rises to the top of her game.

Chen designs for an elite clientele

Chen has created couture for Oprah Winfrey and Helen Mirren as well as Cheng Hong, the wife of Chinese premier Li Keqiang; Fu Ying, the former Chinese ambassador to the UK; and actresses Liu Xiaoqing and Qin Hailu. Much like Chinese designer Guo Pei, who catapulted to international fame when Rihanna wore her canary yellow flame dress to the Met Gala in 2015, Chen is carving out a niche by designing for the Chinese jet-set.

Chen’s aesthetic is romantic and majestic

With an emphasis on draping, trains, feminine silhouettes that enhance a woman’s curves, and light, airy textiles, Chen’s design aesthetic is traditionally romantic. A Victorian influence is apparent in her gowns, which convey a delicate elegance with a modern twist.

Chen trained at the Fashion Institute of Technology (FIT) in New York City in the mid-1990s. Calvin Klein, Norma Kamali, Project Runway’s Nina García, shoe designer Brian Atwood, and eveningwear designer Reem Acra are also alumnae of the famed New York fashion school. After graduating from FIT, Chen spent 15 years in Los Angeles. Living and working in two of America’s most cosmopolitan cities gave Chen a flair for Western bespoke tailoring, which she incorporates into her Eastern flair for craft and tradition. The melding of East and West have been a key component to Chen’s international success.

Chen casts mature women in her runway shows, a shrewd move to stay in touch with her power-elite clientele—many of whom are over the age of 40. According to the South China Morning Post, Chen says, “I didn’t want the edgy, trendy models but ones that conveyed real beauty, grace and looked regal.”

Chen is hands-on when it comes to raising brand awareness

On April 18, Chen spoke at the Global Fashion Innovation and Investment Forum in Beijing where Chinese investors, entrepreneurs, and designers talked about China’s shifting luxury fashion market. Chen’s own brand helped shape one of the event’s major takeaways—that “homegrown luxury brands” are taking on the global market, according to Jing Daily. In other words, because Chinese shoppers are spending so much on luxury brands under the LVMH umbrella, Chinese designers need to step up and compete with global luxury brands by creating an aesthetic that appeals to both local and global audiences, simultaneously.

Chen also put on a fashion show on May 6 at New York’s Plaza Hotel, in conjunction with the China Institute and the China Beauty Charity Fund. The event honored Tiffany & Co., Christian Louboutin, Maggie Q, and Shanghai Tang for their influence in the Chinese market of late. According to WWD, Chen once again was vocal about the shifting role of Chinese haute couture designers. “In order for China to have this global influence in fashion, Chinese people have to look really nice, really stylish,” she said.