Where Is The Best Jianbing In Shanghai? 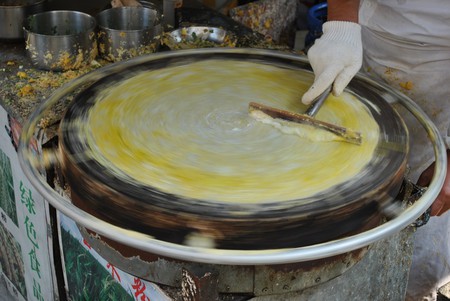 Locals adore it and visitors quickly fall in love with it. Jianbing (煎饼) is one of China’s most appealing breakfast foods; a beguiling combination of textures, flavors and colors that combine into one lovely, hand-held package. Thought to have originated in Shandong Province, the folded crèpe moved to Shanghai with its migrants, and has been adapted to more southern tastes. Jianbing is only good when made fresh, and the best street vendors always have lines of hungry people during the hours before the working day begins. Here’s what to expect, and where to sample this glorious morning meal.

Jianbing is a thin, crispy crèpe made from a sticky mung bean and wheat flour dough. This is spread in a fine layer over a very hot metal slab. An egg is cracked and spread over it as well, once the dough has cooked slightly. If you’re feeling hungry, you can add two eggs – just order liǎng gè jīdàn (两个鸡蛋). 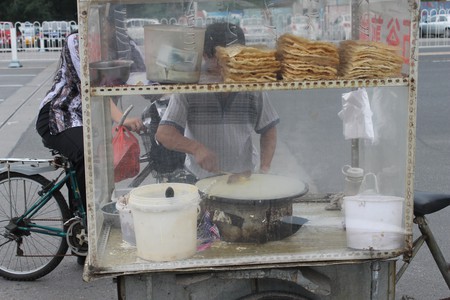 Then comes a delicious decision. Do you want to add the regular crispy wonton wrapper sheets (cuì bǐng, 脆饼) or go for the hunger-busting fried cruller (yóutiáo, 油条)? The crèpe is then folded up and cut in half. The entire process takes less than two minutes. Eat it immediately, and your taste buds will be satisfied with the yeasty fragrance, the warm, crisp and soft textures, the deep, caramel umami flavour of the bean paste punctuated by pickles and cilantro. Eat it quick while it’s still hot! 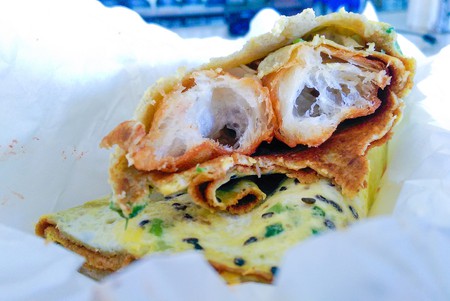 A short history of jianbing

Jianbing originated in Shandong Province in the northeast of China, and the dish can be traced back nearly 2,000 years. Legend has it that the famous imperial chancellor and military strategist Zhuge Liang invented the dish when his soldiers lost their woks. He ordered the cooks to mix water with wheat flour to make batter, then spread it on shields over a flame. The dish raised the soldiers’ morale and helped them win their battles. After that, jianbing was passed down through the generations. Today, the snack continues its popularity in the north, and comes with much more variety. There are multiple types of flours used for the crèpes, and the bean paste usually has a stronger flavour. 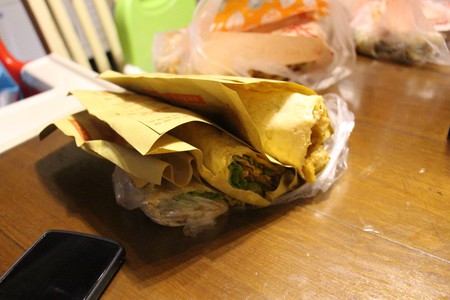 While many street vendors of Shanghai are sadly being elbowed out from their spots to make way for malls, chain stores and skyscrapers, there are still many places to find the beloved jianbing – we’ve listed a few below. Make sure to get there before 10am, as most jianbing vendors only serve until then, or until they run out of batter, whichever happens first!

Get here early, as this popular vendor (whose father was also a jianbing vendor) often sells out quickly

This is one of the few jianbing spots open after 12pm.